London — Standing on a picket line in front of her work place at a world renowned heart-lung hospital in London wasn’t Jeanette Anderson’s first choice for how to spend her day.

However, Anderson said protesting was her “only choice.”

Protesting as part of a nationwide general strike in the UK, Anderson said, was necessary to combat austerity measures from Britain’s conservative led government that now targets the pensions of public sector workers like Anderson and her picket line colleagues at the Royal Brompton Hospital in this city’s up-scale Chelsea section.

“We do not get the fat-cat pensions like the rich,” Anderson said, noting that participating in the one-day strike action wasn’t something she took lightly.

“Public sector workers are already into a two-year pay freeze and now the government plans to extend that pay freeze for another two years.” 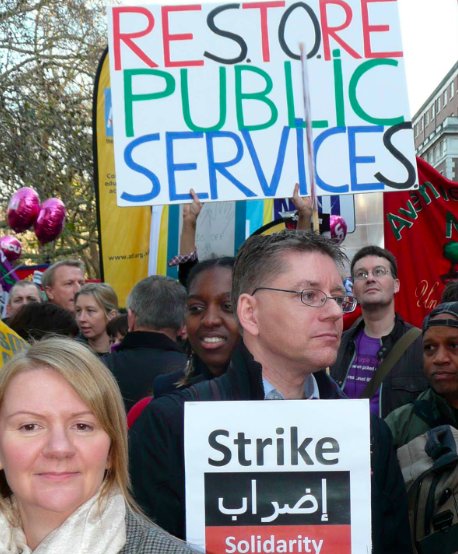 That strike – the largest labor action in Britain in 30 years – closed 62 percent of the public schools in England, Scotland and Wales in addition to shuttering many government offices (local and national) including courts plus disrupting government services, such as forcing the postponements of some

Three miles from Anderson’s Brompton Hospital picket line over 25,000 public workers staged a rally and march that was one of over 1,000 protest actions by workers across Britain on November 30th.

Britain’s Prime Minister David Cameron mocked the effectiveness of the general strike, citing its failure to disrupt operations at the nation’s major airports.

The Cameron government brought strikebreakers for the airports from as far away as the Caribbean to off-set the strike’s impact. Further, major airlines initiated programs to reschedule flights to avoid problems from the strike, particularly anticipated delays in processing passports of arriving passengers.

Countering Cameron, Brendan Barber, head of Britain’s Trade Union Congress, termed the strike a success, saying, “There has been magnificent support” for the strike. Barber promised similar labor actions in the near future if the Cameron government continues to assault the living standards of workers.

The flash point of the strike is the British government’s demands that public sector workers make higher contributions to their pensions and work longer before retirement.

Yet, the wider context of the strike is the set of austerity measures Britain’s conservative leaders say are required to reduce massive national budget deficits.

Deficit reduction actions, many contend, are unfairly targeting the middle and lower classes by forcing them to pay for the economic woes created by the upper class that is largely escaping the slash-and-burn pain of tax increases and service cuts.

“They want us to increase our contributions into the pension pot to ten percent of our pay and then they want to cut our pensions by twenty percent. Where is the fairness in that?” asked Steve Caddick, a National Health Service worker on the picket line with NHS colleague Anderson.

The National Health Service is the government funded healthcare system in the UK that provides much of its comprehensive medical services free of charge unlike the steep fee based system in the United States.

“Our pension fund makes profits each year but the government takes those profits for other purposes, unlike private pension funds that reinvest the profits to increase the fund,” Wheeler said. “All of this is the government taking from public sector workers to pay for the deficits caused by the bankers. The government still is not putting regulations on the banks and that’s what upsets me.”

The average pension for a worker in the National Health Service – Britain’s largest public sector employer – is $12,500 annually in U.S. dollars…hardly sufficient for a lavish life style, especially with the costs of food, energy and seemingly everything else soaring.

According to Britain’s Trade Union Congress, a key organizer of the general strike, public sector pensions average between $7,859-to-$14,147 annually in U.S. dollars.

Many workers argue that government official’s the pitting of public sector pensions against pensions for lower-waged workers in the private sector is both deceptive effort devised to maliciously divide workers.

“Some people in the private sector do have lower pensions than those in the public sector but most forget that many of those lower paid private sector workers used to hold public sector jobs that were privatized, with pay and benefits subsequently reduced,” veteran labor activist Glenroy Watson said.

Watson said there should be “parity” between public and private sector pensions but divide-and-rule tactics are a part of “the general attack” by the conservative government to “claw back” gains that workers have achieved in the past few decades.

“The fact of the matter is that this government’s austerity program is the same program of [the late Prime Minister] Margaret Thatcher in the 1980s when she stole a lot from ordinary people. Here are the same kinds of people back again taking for themselves,” Watson said.

“All the issues in conflict under Thatcher like stealing benefits from ordinary people are nothing new. Too many people refuse to analyze this properly. There is no difference between Thatcher and the current government of [David] Cameron.”

Osborne’s announcements did include plans for billions in infrastructure improvements to stimulate the economy, government loans for small businesses to expand, targeted programs to reduce massive youth unemployment and increases in welfare benefits.

But data from Osborne’s own independent Office of Budget Responsibility stated that his cuts directed toward reducing deficits only had a 60-percent chance of meeting the stated goal of eliminating deficits by 2015-16.

Bracketing Osborne’s announcements were reports from think-tanks painting grim pictures of a possible new recession in Britain, steep reductions living standards for the average family and the poorest 30-percent of households losing more than three times as much as the richest 30-percent of the population.

The day after the general strike news reported that researchers for the British Parliament’s House of Commons library calculated that women in the UK will bear 73-percent of changes in tax credits and caps on public sector pay pushed by Osborne compared to 27-percent impacting men.

Others outside of public sector employment also oppose the austerity initiatives, criticizing the failure of the Cameron coalition government to end accelerating income inequities and crack down on the corporate classes that created the economic collapse with manipulative enrichment-schemes.

“That notion of shared sacrifice pushed by the government is nonsense. It is predicated on the assumption that during the boom economic times everyone benefited and they did not,” activist Osagyefo Tongogara said, while leafleting near the route of the protest march through Central London.

Tongogara, who supported the general strike, said the measurements the government uses to set public pension rates were changed earlier this year to an accounting methodology that short-changes workers by undercounting the impact of inflation.

Austerity actions, Tongogara said, are increasing rates of poverty, especially among children and the elderly – an assertion backed by economists and other experts. “The rich continue to off-shore billions of pounds to avoid paying taxes. Tax evasion is illegal for working people but tax avoidance is not illegal for the rich…that is wrong,” he said.

“The 1% is pushing us around determining our lives, stealing our money, our resources and our possibilities,” James, the founder of London’s Crossroads Womens’ Centre, stated in an email interview.

James, the widow of the late Caribbean author/activist C.L.R. James, said actions like the general strike and the Occupy Movement are vital.

Those activities, said James, are a “strength for all to stop suffering in silence and spell out our real conditions of life and the brutality we try to defeat every hour we’re alive.”