It is also, of course, stoked by the Machiavellian corporate machinations of the so-called popular culture, which found an industry in creating and exploiting self-interest, self-adoration, self-glorification. Me sells. Coupled with avaricious dumbing down of culture, using the fake pretext of populism to mask profit motive, this has given way to outright sneering at actual intellect, study, reflection, hard-won accomplishment. Trump and the “alt-right,” of course, are the sneerleaders.

The idea of working at poetry, at investing thought of weight and consideration, of attempting to express an idea artfully, heartfully, in order to move, elevate, inspire, is uncommon to the point of freakish; almost to being dismissed as the arcane pursuit of stuffy old intellectuals. It’s so 20th century! 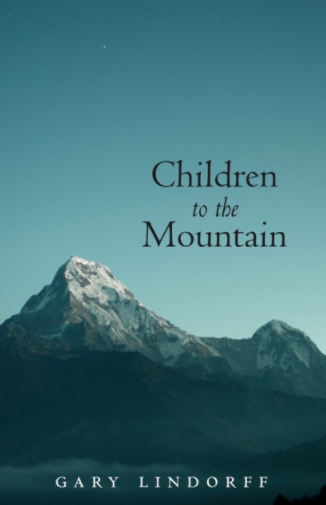 Which is why I find it ironic, and a bittersweet privilege, to tout a just published collection of poetry by Gary Lindorff, (poet in residence at ThisCantBeHappening.net).

We are
breaking the little bones of earth
(bones of coral, bones of red wolf,
bones of bat and bee,

bonobos, their little fingers) . . .
Now that all the bigger bones have been broken
to extract the marrow,
we are breaking all the little bones . . .

to make ourselves powerful
to defeat our enemies in battle. . .

— from “Sucking the bones of the bee.”

To read the poetry of Lindorff in his new collection, Children to the Mountain (Hiraeth Press), is to understand that the pastoral poet is not dead. Lindorff is, in part, the 21st century spiritual descendant of Spenser, Shelley, Milton, Andrew Marvel. Like them, he “retreats from the trappings of modernity,” as the cheat-sheet definition goes, but unlike them, he does not merely rhapsodize over nature. He celebrates it, loves it, but chiefly mourns its degradation, while ruminating with the distillation and almost scientific eye of, say, Annie Dillard, or encoding in haiku-like condensation, or expositing in prose-poem. It’s a major theme in his work, along with temporality: the destruction of ecosystem by humans. As he says: “Living close to the forest means everything to me.”

There is another pervasive quality of Lindorff’s writing that should be emphasized, lest the conclusion be drawn that he is one-note, or a proselytizer. As is evidenced by the preceding excerpt, there is lyrical word play at work here; this is organic utterance of one whose lifelong métier is writing. This poetry is natural, unpretentious, unfettered by arcane idea, eccentric or deliberately obscure point. The style and rhythm of the writing is uncontrived, suited spontaneously to occasion and subject. “Makes its own sauce,” as the slogan goes.

His poem, “Here and There,” well captures Lindorff’s pastoral aspect, his apposition to the human world, throwing into poignantly (perhaps bitterly) written relief the differences between natural and anthropocentric realities:

Here the tide ebbs and rises
and when it rises
the barnacles open and wave little ferns.
There the coral reefs are dying;
the bottle with their message
never reaches shore.

Here a fish leaps and the river sings.
There a river
is a million drinks of water,
a million sad stories of once upon a time.

Lindorff comes by his withdrawal from modernity honestly. His poems carry extra weight when you understand that they are founded on long-standing principle and action.

“Moving to Vermont from Baltimore in the late 1980s changed everything for me,” he said. “I was editing poetry for City Paper in Baltimore and my son, Evan had just been born when Chernobyl blew. Then shortly after that, the Peach Bottom nuclear power plant, 50 miles to the north, closed down for ‘cleaning.’ It had a similar design to the plant in Chernobyl and I thought it would be smart to get the hell out, move to Vermont to raise my son.”

The move helped contributed to the breakup of his first marriage, and he began taking deeper stock of life, embarking on the first of six vision quests. (A vision quest is essentially a Native American ritual of retreat and fasting over the course of several days.) This led, over the years, to studying and practicing shamanism, and ultimately to a melding of Jungian psychology and Native American spirituality. Any suspicions of New Agey, sophomoric sensibility are quickly laid to rest by the sincerity, vividness, and weight of his writing. Here is “Under a Thunderhead”:

Under a thunderhead
in a suddenly darkened field,
straight-backed against a stone,
I wait
like a hunted thing
charmed into paralysis
by a predatory growling
distantly igniting the silver lining,
blowing the fuse
of everything I was promised
as the trees fill their sails
and the ridge line fails –-
that giant wall breached!
Under the thunderhead
I am still here
as the temperature drops 5 degrees
because, not I,
but something being born in me,
that has storm-tested wings,
wants to stay no matter what,
instead of dashing for the house
to watch from inside
as I have watched,
how many storms?
unhinge this gentle place,
while the wind
drags velvet curtains
across the valley.

There are 53 poems in Children to the Mountain, and many refer to the “modernity” that Lindorff rejects, with occasional reference to current events and catastrophes such as school shootings, Ebola, animal imprisonment/cruelty—even a tribute to Sen. Bernie Sanders (not surprising, perhaps, for a Vermont poet). Excerpt from “One Day in the Asylum”:

Like a Stephen King novel.
There were distant mountains
Crumbling silently,
Occasionally a forest would fall down.
Bees were going extinct.
Japanese children, eating Minke whales in school.
The government was busily making tiny atom bombs.
But who knew what was real anyway?

“Asylum” ultimately focuses on the sparrow that briefly joined Sanders on the podium in Portland. Excerpt:

Well, that brave little bird,
Bobbed right over the wall.
Just to look in on our trouble.
And everything stopped.
It is the dove of peace
Our leader announced.
It wore a little crown of thorns
Some say.
And some say it tweeted,
Right into the microphone.
Lindorff’s work is nothing if not relentlessly contemplative. Each poem is a purposeful plot of thought, inevitably stimulating reflection. Not all are immediately apprehensible, but this is due more to reader impatience than writer quirk; re-reading invariably renders reward. They are grouped in four parts: “Tipi in the City,” “Manure Cannon,” “Dismantling Hell,” and “There is a Mountain.” Many are personal, and all the more alluring for it, from the poet’s grateful remembrance of his first encounter with a shaman, to unsentimental childhood memories of shooting guns with his brother — and their dumb witnessing of the assassination of a hognose snake.

Though this might sound more like public relations than analysis, to simply leaf through the book and read at random elicits stopping and reading. You don’t find yourself skipping, rejecting.

And the stylistic diversity is surprising. In “Bestiary, the old gang is back,” you find the poet whimsically engaging in quasi-fable, relating a conversation among a lion, penguin, butterfly, mouse, and worm. Their discussion, which is nominally about getting together for a game of cards, overtly and subtly takes issue with that most monstrous of all creatures: the human. Excerpt:

Mouse (who never had an evil thought)
Asked penguin (who never raped or pillaged),
Have you seen caterpillar
(that one who never held anyone at gunpoint)?
Oh, you mean butterfly, said penguin.
Now he is butterfly (but, just like caterpillar,
He never held anyone at gunpoint either).
Crow (who never stabbed anyone in the back),
Who happened to overhear this conversation,
Said he just saw butterfly
Flying over the garden.
Should I tell him you want him? asked crow.

Today, Lindorff lives with hhis wife, Shirley (and three cats) in an intentional community — a village of persons with some common values — consisting of six families, each of which owns ten acres. There he chops wood, manages a garden, makes music, carves stones, goes for walks in the forest, offers counseling as a dreamworker and shaman, and. . .

Writes poetry, such as one that would serve as an apt imperative for our time, “Dismantling Hell.” Excerpt:

That night I dream that I am in town, stopping at Walmart
and I notice that the greeter bears a strange resemblance to Christ.
He says, “Welcome to the last place on Earth.”
I ask, “Where do you keep my heart?”

RIP RENSE is not as good as a skink or a skunk, but does his best. He curries favor with only the finest curries. During the full moon, he turns into a human. He is fond of Puccini and chocolate and, as Steinbeck said of “Doc,” in “Cannery Row,” true things. A native of Los Angeles, he is the author of several novels and short story collections, a collection of poems, and a forthcoming mystery, “The Bronzeville Boogie.” His work can be found at riprense.com