Editors’ Note: In the increasingly tight and bitter contest for the Democratic Party’s nomination for president, candidate Bernie Sanders has gained critical and enthusiastic support from young people in part because of his stirring call for free public college education — no surprise given that student college debt has passed the $1.3-trillion mark. Critics, including Sanders’ opponent Hillary Clinton, say he is proposing an unaffordable fantasy, though his plan sensibly calls for funding the idea with a tax on speculative stock and bond trading. In reality though, Sanders’ idea of free college (which is offered in most of Europe) is hardly a new idea in the US. Indeed, it’s the way things used to be here as recently as the 1960s — a point voters in upcoming primaries like the ones to be held in Pennsylvania, Maryland, Connecticut, Rhode Island and Delaware next Tuesday should bear in mind. Robert M. Nelson (CCNY ’66), a Senior Scientist at the Planetary Science Institute, recalls in the following article, free college was actually taken away by the country’s ruling elite not that long ago. As Nelson writes:

In 1837, a remarkable politician, Horace Mann, became Massachusetts’ Secretary of Education. He argued successfully that universal, public, nonsectarian education in culturally diverse common schools was imperative for our new nation. Mann’s idea spread like wildfire. The free common school concept was adopted in every state in the union.

After the Civil War, the free tuition principle was expanded to include higher education. It worked brilliantly for a century for millions of Americans, including me.

A Pathway for Immigrant and Working Class Children

In 1966 I finished college. I joined my sister as the first generation of our family to cross the divide. My father was an immigrant; my mother was the daughter of immigrants. The family had little wealth to show despite their life of hard work.

How could low-paid immigrant families and ordinary dirt-poor working-class families send their kids to college? It was simple. I graduated from the City College of New York. My sister graduated from Brooklyn College. Both schools were tuition-free. It’s easy to forget in today’s America where the “free market” is the national religion that it’s the way things still were a just half a century ago.

CCNY was founded as the Free Academy of the City of New York in 1847. Its mission was to provide the sons of immigrants and the poor with access to college education. In 1870, Hunter College was founded for New York’s young women. In 1930, Brooklyn College became New York’s third tuition-free college. 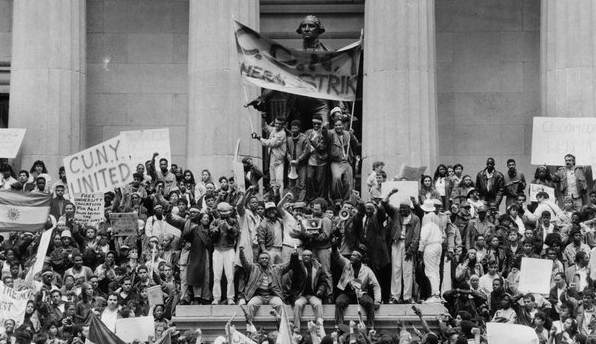 CCNY students at a 1968 protest against tuition charges at New York's oldest public, and once free, university

For more than a century the taxpayers of New York provided free higher education to all who qualified. Graduates of that system include a child of immigrants from Jamaica, Secretary of State Colin Powell (CCNY ’58), the daughter of an immigrant from Austria, Sen. Barbara Boxer (Brooklyn College ’62), and former NASA Administrator Dan Goldin, (CCNY ’62).

CCNY awarded bachelor’s degrees to more Nobel laureates than any other school in the world. The most celebrated researcher to have studied there was Jonas Salk (CCNY ’34), the creator of the polio vaccine.

Brooklyn College also welcomed a son of Polish immigrants, Vermont senator and presidential candidate Bernie Sanders. He entered in 1959 and finished his degree at University of Chicago.

Sen. Sanders has proposed a national program of free higher education for all at public colleges and universities. New Yorkers would return to a system that had worked for a century before ending 50 years ago.

Why did it work?

The economic premise of free college instruction is that educated students have higher income over their lifetimes. Under a progressive income tax system they pay back the cost of their education — with interest. In fact, they do.

A modified student loan scheme now infests every public education system in the country. Students pay interest rates of 6-7 percent, not after graduation, but from the day they sign the loan papers at the bank, and they pay that extortionate rate even though it’s the government making the loan, and even though Congress made it almost impossible for a borrower to escape the onerous debt, even through bankruptcy. (Students, while still enrolled in school, can defer making principal and interest payments, but the interest continues to add to the total debt while they’re working on those degrees.)

Some might argue that tuition-free higher education was gutted by short-sighted public university administrators of the 1960s who could not pass up cheap loan money. Others point to the avarice and greed of our under-regulated banks.

Today, because of the staggering debt burden faced by graduates, which has effectively made economic serfs out of a whole generation of younger Americans, free higher education has become part of our national debate.

Regrettably, this development comes at a time when most presidential candidates, including Clinton, have quite unwholesome relationships with investment banks. They dismiss free college tuition as, ‘Pie in the Sky’.

Democratic Presidential candidate Hillary Clinton (Wellesley ’69) has strongly opposed Sen. Sanders’ proposal for tuition-free college for all. She said, “I disagree with free college for everybody. I don’t think taxpayers should be paying to send Donald Trump’s kids to college.” (Trump’s degree is from Ivy-league Pennsylvania University’s Wharton School of Economics, 1968).

Clinton fails to understand the teachings of Horace Mann. The point of the American common school was to provide a common platform for all children regardless of class. I would have loved to have mingled with Donald Trump if he had gone to CCNY. We both might have learned something.

Horace Mann had a radical idea. He was right 200 years ago. Bernie Sanders is correct today. We did it before, let’s do it again.

Robert M. Nelson (CCNY ’66) is a Senior Scientist at the Planetary Science Institute. He recently retired from NASA’s Jet Propulsion Laboratory in Pasadena where he was a Senior Research Scientist.