One searches almost in vain for honest reporting on the Ukraine conflict in the US corporate media, which is simply parroting the US government position, which is that the rebels in eastern Ukraine are simply tools of Russian aggression against Ukraine.

Yet the murderous shelling of the people of the rebel regions of Lugansk and Donetsk in eastern Ukraine is almost certainly wholly the work of an aggressive Kiev-government led Ukraine military, which has been ramping up its forces in the east in preparation for a renewed assault on the two separatist states of Lugansk and Donetsk.

Each time there is a report of shelling of either city, Lugansk or Donetsk, the US media either completely fail to mention who might be responsible, or they report that “both sides” accuse each other of being responsible, though this is clearly absurd, since even those same media also refer to Donetsk and Lugansk as “rebel-held” or “separatist-held,” or as “rebel strongholds.” Why, one ought to ask, would the rebels shell their own territory, much less the capitals of their respective rebel regions?

The model for how such incidents are to be reported was set on Oct. 6 by America’s version of Pravda, Voice of America. In its article that day, headlined NATO Concerned about E. Ukraine Cease-Fire Violations, it states:

The new head of NATO said the Western military alliance is concerned about the large number of violations of the cease-fire in eastern Ukraine, which he indirectly blamed on pro-Russian separatists.

Following in lockstep with that approach, here’s what the US media had to say about the conflict in recent weeks:

The monitoring group, the Organization for Security and Cooperation in Europe, said that long columns of unmarked military vehicles, some towing howitzers, were spotted over the weekend. The monitors did not speculate as to the origins of the trucks or the people inside them, but Ukrainian officials said the statements bolstered their claims that Russia was again arming and training separatists.

…On Sunday, after what journalists in Donetsk described as the heaviest night of artillery shelling in and around the city in at least a month, the O.S.C.E. observers saw two more unmarked military columns. The observers noted 17 trucks in each column, some equipped with Grad ground-to-ground rocket launchers and others towing more howitzers.

Comment: Notice the focus here on the unidentified military vehicles, but not a word about who would have been firing that heavy artillery barrage into rebel-held Donetsk. A real news organization — as opposed to a propaganda organ — would have asked that question and would have sought answers. Clearly the rebels weren’t bombarding their own capital city, but the Times didn’t mention that absurdity. 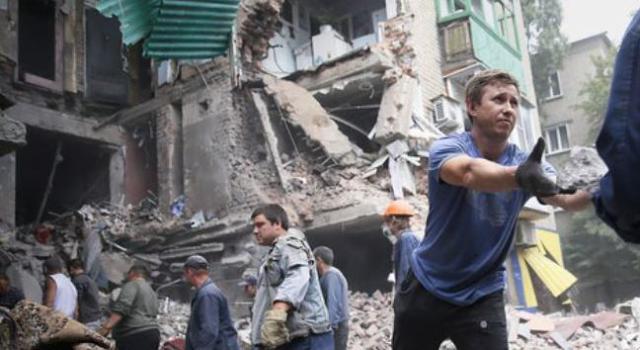 Does this look like something rebel fighters in east Ukraine would have done to their own 'stronghold' and capital of Donetsk?

Fresh volleys of artillery fire were heard across many parts of the separatist stronghold of Donetsk in eastern Ukraine on Sunday, a Ukrainian government statement said, after Kiev warned again of rebel preparations for a fresh offensive.

A Reuters witness in central Donetsk heard several dozen blasts of artillery fire, although it was unclear who had launched them or what was under attack.

Shelling from both sides has repeatedly punctured a ceasefire, agreed in a deal signed on Sept. 5 to end a war that has killed more than 4,000 people since April. Government forces and rebels have accused each other of violating the terms of the truce, raising fears it could collapse entirely.

Ukraine’s pro-Western leaders and NATO have accused Russia of sending soldiers and weapons to help pro-Russian rebels launch a possible new offensive, a charge the Kremlin has repeatedly denied.

Before the latest reports of shelling, a Ukrainian military spokesman said on Sunday the weekend had been calmer than in previous days, but warned again of a buildup in separatist forces.

“Compared with previous days, the number and intensity (of shelling) fell, but there are signs of rebels and Russian forces preparing for an offensive,” Andriy Lysenko said in a briefing in Kiev.

Comment: Once again nowhere does Reuters (now a US news organization, after its merger with Thompson Corp to form Thomson Publishing Group, headquartered in Philadelphia), mention that the shelling of Donetsk would inevitably have been the work of the Ukraine military, not of the separatists who are headquartered there. Instead, the article keeps mentioning the claim that the eastern Ukraine rebels are backed by Russia (no crime, and certainly something the US does militarily to countless countries).

Two teens were killed and four others wounded when an artillery shell hit a school in Ukraine’s war-torn Donetsk region on Wednesday as a two-month truce between Kiev and pro-Russian militants appeared to be in collapse.

The BBC reports that the shell struck a school sports field where children were playing soccer, near Donetsk airport. The four teens who survived the attack are being treated in an intensive care unit at a local trauma center.

The renewed clashes appear to have been spurred by the widely condemned elections held in Ukraine’s rebel-held southeast over the weekend. Both Kiev and separatist forces are reportedly preparing for all-out conflict once again, with troops being mobilized.

Comment: Again, we so no information or even speculation as to who would have fired a shell into a Donetsk schoolyard, but it seems obvious that unless it was an errant shell fired by rebels, they would not have been targeting a playing field used by their own people.

To get any real idea as to how this conflict — really a civil war, or war of secession by a part of Ukraine populated largely by Russian speakers — one has to forget US media and turn to something like Al Jazeera. Here’s an Al Jazeera report on the conflict, headlined Moscow says Kiev ‘crudely violated’ ceasefire and dated November 6:

Russia has accused the Kiev government of violating the ceasefire in eastern Ukraine, saying it has intensified its military offensive against rebels.

The accusation came as Ukraine announced the introduction of passport controls around areas held by pro-Russian separatists and heavy artillery fire erupted in Donetsk.

“It is obvious today that these agreements have been crudely violated by the Ukrainian side,” the Russian Foreign Ministry said on Thursday.

“In place of de-escalation, Kiev has intensified the hostilities in the southeast of the country with the use of heavy equipment, which has led to thousands of casualties and large-scale destruction.”

…It was not possible to verify which side was responsible for the fire, AFP reported.

The fragility of the situation was underlined on Thursday when the Kiev government and the rebels traded blame over the shelling of a school the day before, which left two teenagers dead and four others injured.

Andriy Lysenko, a Ukrainian military spokesman, said that preliminary information indicates the shells flew into the schoolyard in Donetsk from a location controlled by separatist forces.

Lysenko said that in the latest shelling across the conflict zone, nine Ukrainian soldiers had been wounded. The separatists rarely release casualty figures.

He also repeated accusations that “Russian units and mercenaries” continued to cross into Ukraine.

Russian denies directly aiding the rebels, although Russia soldiers and equipment have been frequently spotted by journalists in the conflict zone.

Comment: Notice how differently this Al Jazeera report covers the shelling of the playground, from the way it was handled by Time Magazine. Here, the Ukrainians are quoted as blaming the rebels, but the rebels deny responsibility and point to the widespread “indiscriminate” shelling of civilians in their territory by Ukrainian forces.

That is good journalism.

The stuff being published by the US corporate media isn’t journalism at all. It is rank propaganda in support of the US government’s goal, which attempting to drive, at all costs, a wedge between America’s vassal states in Europe, and the Russian Federation.

The American public need to know that, but as long as they just obtain their news from the corporate media, whether that’s Fox or CNN or the vaunted New York Times, they’re not going to get it.

Tenderized by life (followed by a footnote on LOW and thoughts on the writing of this poem)
There was a dog in my dream with 6 legs. One of the dog’s legs didn’t work. He didn’t need that leg. He had 5 perfectly good legs. This dream…
All Gary Lindorff's Posts