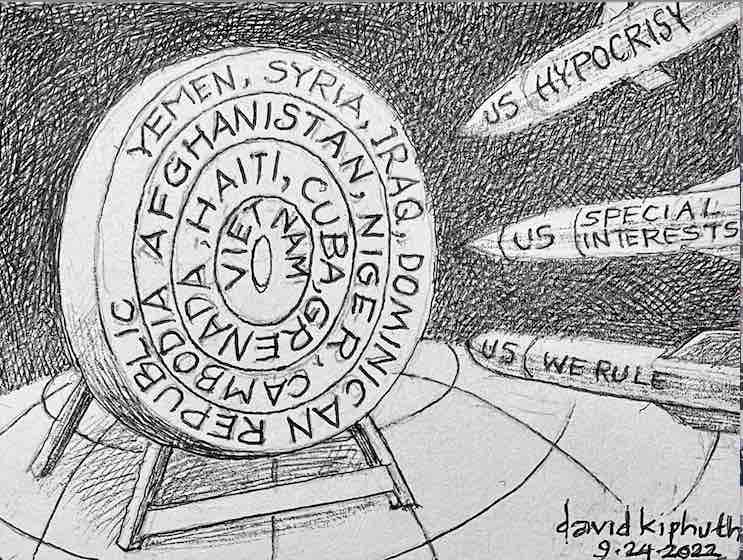 President Biden’s condemnation of Russia at the UN on Wednesday, where he claimed Russia had violated the UN Charter by invading Ukraine, a country he ludicrously insisted posed  “no threat” to its larger neighbor, is epic hypocrisy coming from the leader of a country that not long ago invaded and destroyed Iraq based on a total fraudulent claim asserting that country was developing or even already had weapons of mass destruction.

It is illegal under the UN Charter for any country to invade or threaten to invade another country unless it is sanctioned to do so by the UN Security Council, or unless it faces imminent threat of attack by that country.

Now under that Charter, which is a formal treaty signed and adopted by both the United States and the Soviet Union and its successor Russia, President Putin’s invasion of Ukraine is to be sure illegal and a “Crime against Peace” under the UN Charter, but the US, of all nations on the UN Security Council, is the last country, and Biden, as president of the US, is the last world leader of such nations to be leveling that accusation.

How many nations has the US invaded illegally, just since WWII?  Let’s see, should we start from the most recent and go backward?  There are so many, none of them ever posing a threat — imminent or otherwise — to the US:

I know I have left some US wars and invasions out, including the Bay of Pigs invasion of Cuba that involved US-trained Cuban exiles the used hoping to create an uprising in 1961 against Castro’s government that would allow the US to enter the battle on some pretext.

The point is, the US, the primary violator in the world since World War II of the UN Charter, not to mention the primary perpetrator of massive war crimes against civilian populations over that period, is simply in no position to criticize the Soviet Union, even if its invasion of Ukraine is illegal under the Charter.

This is especially  true because it is undeniable that the US helped orchestrate the coup and immediately backed its ouster of the pro-Russian elected government , actually hand-picking an unelected fascist and anti-Russian replacement government in 2014 that began threatening, harassing and attacking ethnic Russians, particularly in eastern Ukraine. It is also undeniable that the US has long hoped to pull Ukraine away from Russia and to bring it into NATO, which would allow it to put military bases and US planes and rockets there, only minutes away from Russia’s capital and industrial heartland.

The difference between the genuine threat posed by US actions in Ukraine especially since 2014  and what the US considered “threats” in any of its wars listed above is incredibly vast.

I don’t believe that Russia should have invaded Ukraine. That country’s government was apparently ready to avoid war by agreeing to remain neutral, not to join NATO or allow US bases or weapons systems on its territory, and probably to reach some deal on autonomy or independence for the far eastern provinces of Donetsk and Luhansk, but Putin decided to try for a whole loaf, or a larger piece of Ukrainian territory, which hasn’t been going very well for him.

That said, Biden, head of a country that has wasted trillions of dollars on unjustified and illegal wars since the end of World War II — wars that have killed millions of people, the vast majority of them civilian men, women and children — should STFU and start working for an end to that conflict starting with a ceasefire in place and negotiations to reach a mutually acceptable end to the mutual blood-letting.

Biden has no standing to call Russia a war-criminal nation. The US holds the unassailable prize in that wretched category.  It was true when Martin Luther King Jr. said it at Riverside Church in 1967 as the US invasion of Vietnam was underway, and it is even truer today after another half century of criminal US wars.

Back in the middle of 1995, I as a Hong Kong correspondent for Business Week  along with a group of about a dozen other  journalists from Hong Kong who covered economic and business stories, were invited to visit that beautiful country lying along the eastern bank of the Mekong River opposite Thailand.

We were there as guests of the Lao Communist government, and spent most of our time in the capital city of Vientiane and the old royal capital to the north of Luang Prabang.

I took some time to wander on my own outside of Vientiane and around the outskirts, and up the central mountain overlooking Luang Prabang.  Using bits of  pidgen French, my Chinese Putonghua and English, I was able to communicate with some more educated people I met, but had to resort to sign language with peasants.

While wandering around in both cities, I saw a number of young children, mostly boys, missing parts of limbs — arms that ended at the elbow, or a leg ending at a knee that required the use of a crutch. I asked about this oddity because while you expect to see cripples, including crippled children in warzones,  the US war on that peasant country had ended in 1975, long before any of these children had been born. The answer was that these wounded kids were victims of long-buried US anti-personnel “bombies” — small baseball-sized usually colorful but deadly exploding devices that were deliberately scattered by larger bomb casings and that  explode on being desturbed, throwing out vicious flechettes.  hundreds of thousands of those grotesque and criminal weapons were dropped by the US Military along the Ho Chi Minh trail, the supply line through the Laotian jungle bordering Vietnam used by North Vietnam to supply its fighters and the National Liberation Movement in the South and to bring wounded fighters to the north for treatment.

An officer of the US Embassy in Laos, speaking off the record, told me that the US government was refusing to conduct a major cleanup of all that unexploded cluster bomb ordnance until the Lao government released all alleged US POWs it was holding. But he also told me the embassy knew that such claims, perpetrated ad nauseum in the US by right-wing veterans organizations like the VFW and American Legion, were incorrect. Any missing GIs and airmen at this point in Laos and Vietnam, he said,  are either people who died in the jungle, their bodies long decayed or eaten by animals, or were deserters who long since met and married local women and are living  peacefully in the country with no desire to return to the States to face prosecution or abandoned families.

I saw other signs of the US war atrocity in Indochina. There were so many bombs dropped that tail ends of the unexploded 500-lb. bombs can be found gracing government offices, bank lobbies, hotel lobbies and the like,  standing on their four fins and filled with sand and serving as cigarette ashtrays.

On  a hike up the mountain overlooking Luang Prabang, i heard laughter and found two young Lao girls using the still smoothly turning steel swivel mount for an anti-aircraft gun for a makeshift carousel. Their innocent laughter as they used the remains of a weapon that was the city’s pathetic defense against remorseless attacks by illegally invading US bombers and fighter jets during the Indochina invasion made me tear up in sadness and rage. What did this country of a few million peasants ever do to the US to deserve such torment?

I didn’t even get to visit the Plain of Jars, an area that from the air looks like a moonscape covered with greenery because of the number of circular craters produced by 500-lb. and 1000-lb.  bombs deliberately dropped on rice paddies to terrorize farmers from growing crops and to kill their water buffalos, as well as to kill the peasants themselves.

No, the US has absolutely no right or standing to call any other nation in the world genocidal,  criminal or a terrorist nation. There is simply no comparison to the magnitude of atrocities that the US has committed, starting with the two nuclear weapons dropped on the non-military targets of Hiroshima and Nagasaki, and ending, for now, with the criminal bombing of an Afghan family as the last US troops were fleeing Kabul when the US admitted defeat in that 20-year war of aggression.

There has never been any reparations paid to Vietnam, Laos or Cambodia or to any other country that has been a victim of the US military around the globe.

Instead we have the US State Department trumpeting its spearheading of a war crimes prosecution conviction at the Hague of the last surviving leader of the Khmer Rouge of Cambodia, while the US itself still refuses to even submit to that same court’s jurisdiction, knowing that if it did, all its surviving presidents and assorted generals would end up in the dock facing similar charges.