In the end they couldn’t get away with it.

As I noted back on Monday in my first article on the Sunday Navy SEAL raid into Pakistan that killed Osama Bin Laden, President Obama himself spilled the beans in his initial midnight statement, when he said, “After a firefight, they killed Osama bin Laden and took custody of his body.”

After that perhaps unintentionally honest account of an execution, the lies began, with White House chief counter-terrorism advisor (great title huh?) John O. Brennan fabulating that Bin Laden had “engaged in a firefight” with the SEALs who “entered the area of the house he was in,” and adding, “Whether or not he got off any rounds, I frankly don’t know.” Then there were the lies that Bin Laden had shamefully used his wife as a “human shield,” that he had been armed with an assault rifle, etc.

In the end, the truth came out. There had been no fire-fight at all with Bin Laden. The 79 (!) Navy SEALs who assaulted the compound (originally we were told “two dozen”) were confronted by a total of three men (perhaps only one of whom fired at them), with no reports that the women and children who comprised the rest of the residents of the compound offered any armed resistance at all (unless you count Bin Laden’s unarmed wife who allegedly “charged” the men entering the bedroom, and unless you count her actual arms as “arms”).

By the time the assault team members had reached Bin Laden’s third-floor boudoire, the entire compound had reportedly been secured, with every one of the residents either dead or bound up and cuffed, and most of the team was busy packing up computers, hard drives and other potential evidence to be stowed on the escape helicopters.

The cornered Bin Laden was, at that point, simply executed with two shots to the forehead. 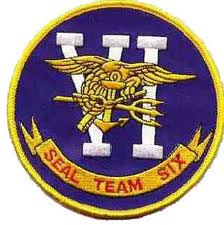 There was, as I correctly surmised from the available evidence on Monday, no attempt at all made to capture him alive.

The only thing missing from the assault narrative at this point is an admission from the White House that in fact the goal of the mission was precisely to kill Bin Laden, and then make him vanish.

The fabricated story of his resistance and his cowardly hiding behind a wife was a Jessica Lynch-style fable that fell apart faster than a popping balloon, with the White House attributing the whoppers to “the fog of war.” Try the foghorn of propaganda.

My guess is that the White House had no choice but to come clean. Photos of the bedroom airing on Pakistani television on Monday showed that it had been barely disturbed by the confrontation. There were no bullet holes in walls. The clear glass windows were unbroken. The arch-villain’s waterbed had suffered no leaks. There wasn’t even much blood to be seen on the floor. The scene certainly was not what you’d have seen had there been a “firefight” in the enclosed space. I mean, if bullets had been fired at the American room invaders, there would either have been wounded men or damaged walls or windows. There was neither.

We have to then assume that the goal here was target termination. And then we are left to wonder why? As I noted earlier, Bin Laden was the central figure in Al Qaeda. Even if he wasn’t the actual planner of terrorist actions himself, he was the paymaster and fundraiser for the group. Without question, had he been bundled up in an orange jumpsuit, or in diapers with a plug up his butt, and carted away to Bagram Air Base or Guantanamo or one of the many CIA black sites and subjected to the “permissible” forms of “enhanced interrogation” allowed by Presidential executive order, he would likely have revealed a wealth of invaluable information that could have been used to destroy the organization.

So why was he not captured alive?

According to the latest White House line–this time from CIA Director and soon-to-be Secretary of Defense (sic) Leon Panetta–the reason Bin Laden was executed was that he made “some threatening moves” that “clearly represented a clear threat to our guys. And that’s the reason they fired.”

Hmm. “Our guys” in this case were the most dangerous bunch of trained killers in the US military, armed to the teeth and extensively trained in lethal martial arts. And we’re asked to believe they felt mortally threatened by an unarmed man known to have been sickly and never particularly good at martial skills. So what kind of “threatening move” could he have made? Did he shake his fist at them? Give them the finger? Try to throw a punch?” It hardly matters. If these American supermen had wanted to capture him, or if they had been ordered to capture him, they had the manpower in the room to do it, even if he did bite and kick and insult them. (Update: In the latest effort to put a justifiable face on the execution of Bin Laden, Panetta on Thursday was claiming, out of the blue, that there was an AK rifle, or was it a pistol?, lying “within reach,” as though that would have posed a mortal threat to the expert marksmen already confronting him with automatic weapons pointed at him. I mean come on. If there had been an AK in the room, with all that shooting going on outside, wouldn’t our arch-enemy have had it pointed at the door and fired it as the team entered? Let’s get real here! Others in the government have speculated to reporters that the SEALs may have feared that Bin Laden was wearing an explosive vest, but if that were the case, and they had wanted him alive, they could have, and probably would have, first tossed a stun grenade into the room and only then entered.)

My guess is that a living, breathing, walking, talking captive Osama Bin Laden was the last thing President Obama–or the CIA–wanted.

Hell, they didn’t even want a dead Osama Bin Laden around. Hence the quick “burial” at sea, which even Harvard attorney Alan Dershowitz is condemning as a “mistake,” and “willful destruction of evidence.”

When all the hoopla and jingoism dies down, this whole affair will be seen as one of the most outrageous acts of duplicity and propaganda in the long history of American militarism.

In fact, the more you look into what happened here, the more it looks like this whole mission was about boosting the president’s poll standing, not at striking a devastating blow at Al-Qaeda.