Philadelphia–When historians started digging into the facts about the first “White House,” where President George Washington lived when Philadelphia was the nation’s capital, they dredged up more than just mundane data.

They also dredged up the seamy saga of the first president’s slave legacy here in the “Cradle of Liberty,” where the hero of America’s Revolution brought nine of his house slaves, only to see them embarrass him by trying desperately to escape from bondage.

At high noon on December 15, 2010, hundreds of people, including Philadelphia’s Mayor Michael Nutter and other dignitaries, brushed off bone-chilling cold to participate in a controversial yet truly historic event – the grand opening the first monument to slavery ever erected on federal property.

That monument is among the elements in the eclectic mix of items comprising a new exhibit at Philadelphia’s storied Independence National Historic Park that honors the mansion where America’s first two presidents – George Washington and John Adams – lived while in office.

Philadelphia served as the capital of the United States from December 1790 until May 1800.
That multi-media exhibit, entitled “The President’s House: Freedom and Slavery in the Making of a New Nation,” is the result of an eight-year battle over how best to both commemorate the nation’s first White House while recognizing the role of slavery inside that house and the nation as a whole. 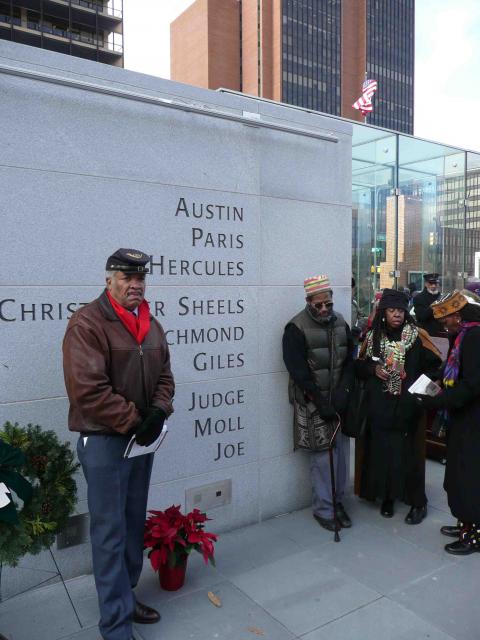 The National Park Service initially objected to recognizing either slavery or the first White House. While some people bristled at the inclusion of any mention of slavery in the context of the nation’s first White House, many others insisted on highlighting this buried part of American history.

“It is a visual history lesson designed to inspire examination of a dark period in our nation’s history as well as inspiring our hope and vision for true freedom,” said U.S. Congressman Chaka Fattah (D-Philadelphia) said in a prepared statement. Fattah along with Philadelphia congressional colleague Bob Brady (D-Philadelphia) helped secure initial funding for the $8-million dollar project. Philadelphia’s former Mayor John Street jumped started the project in 2003 with a million dollars in funding plus allocating staff to the project.

Washington, the army general who led America’s fight for freedom, spent the waning years of his life making determined but unsuccessful efforts to recapture one of those escaped slaves, his wife’s maid Oney Judge, who lived out her long life free in New Hampshire.

Ironically, Judge escaped from that Philadelphia mansion in 1796, three years after President Washington formally signed the Fugitive Slave Act inside that very house. That law, mandating the return of runaway slaves to their masters, was approved by Congress during a session held inside Independence Hall, which is located less than fifty yards from the rear of the mansion site.

This new exhibit features a granite slab etched with the names of Judge and the eight other slaves the Washington’s held captive inside their Philadelphia mansion – a small fraction of the 300+ slaves they kept at their estate in Mt Vernon, Virginia.

The other slave who escaped from the President’s House was Washington’s favored cook, a man named Hercules who is believed to have fled to New York City.

Washington, fabled in history as the man who couldn’t tell a lie (admitting according to popular legend that he had chopped down a cherry tree), manipulated Pennsylvania law to keep his slaves in Philadelphia. Then the state law required the freeing of any slaves who had lived in Pennsylvania for six months, so Washington regularly contrived to rotate slaves approaching that duration of residency to his Virginia plantation to evade the freedom-granting statute.

“We are not trying to make George Washington look bad. But we can no longer hide his bad acts. History must be about truth and this is the truth,” said attorney Michael Coard, head of the Avenging The Ancestors Coalition, an activist group in Philadelphia that pushed hard for the slave monument.

The exhibit, which includes videos, text panels and re-creations of physical elements of the executive mansion, sits directly outside the front door of the pavilion housing America’s hallowed Liberty Bell.
That pavilion’s front door is on the location of the stables for the executive mansion, which was where most of the slaves Washington held in Philadelphia had to sleep.

In another overlooked aspect of American history the name for the Liberty Bell came from early 19th Century anti-slavery abolitionists who were the first to seize it as their symbol of freedom The Bell had initially been cast to hang in the tower of Independence Hall.

Ed Lawler Jr., the historian whose 2002 published study on the President’s House sparked the campaign which led to the slave exhibit, scoffs at criticism that highlighting slavery pollutes the long-overdue recognition of the nation’s first “White House.”

“Slavery permeates all aspects of the executive mansion,” Lawler said, referencing the fact that the illustrious owner of the mansion made his fortune from selling slaves, as did previous owners of the property.

“The Park Service should have done something with this matter decades ago,” Lawler said, noting how the NPS, until a few years ago, had deliberately neglected to instruct its official guides at Independence Park about either the mansion or the role of slavery there.

Lawler and other historians have noted how the Park Service hid the issue of slavery, primarily so as to not offend whites from southern states, who are among the two million tourists who visit Independence Park annually.

Two items in the new exhibit particularly highlight America’s still unresolved struggles with race and racism: the first document published by blacks to be copyrighted in America, and the first petition sent to Congress by blacks seeking an end to slavery.

The 1794 copyrighted document provided a detailed account of the valiant roles blacks performed during the 1793 Yellow Fever epidemic that decimated ten percent of Philadelphia’s population. That account was specifically written to rebut a slanderously inaccurate article charging blacks with criminal misconduct, which had been written by a white journalist who fled the city unlike the authors of that document, Philly black leaders Richard Allen and Absalom Jones.

Highlighting how the struggle against racism continues in the nation’s first capital, blacks in Philadelphia currently are blasting the city’s largest daily newspaper, the Philadelphia Inquirer, for its slanted coverage of a dispute over increasing minority contracting at the School District of Philadelphia. (Blacks had also mounted bitter battles to ensure the participation of minority businesses and workers on the “President’s House” project – an issue charged with irony, which Philadelphia’s mainstream media virtually ignored.)

In another example of how the struggle goes on, that 1799 anti-slavery petition also sought relief for free blacks from the “wicked” but widespread practice of being illegally kidnapped into slavery through abuses committed under the Fugitive Slave Act.

In early November 2010 the ACLU-PA filed a class action lawsuit against the Philadelphia Police Department charging discrimination against blacks through anti-crime searches tagged ‘Stop-&-Frisk.’ Blacks, in 2009, comprised 72.2 percent of the 253,333 ‘stops,’ although blacks are just 44 percent of the city’s population. According to Police Department’s own data, dragnet-style policing only produced arrests in 8.4 percent of the ‘stops,’ with the majority of those arrests being for “interactions following the initial stop.” That is to say, people who had committed no crime ended up being arrested for things like disorderly conduct or resisting arrest, meaning for offenses that most likely arose because the objected to being harassed by police.

In a perverse example of progress exposing a paradox in America’s race-based policing, Philadelphia Mayor Michael Nutter and its Police Commissioner Charles Ramsey (named in the ACLU lawsuit) are both black, yet both back the Stop-&-Frisk policy, calling it a necessary anti-crime measure and downplaying its racially disproportionate impact.

Contemporary conservatives routinely bash blacks for demanding breaks not given whites. Yet a passage in that 1799 petition begs for fairness – not special favors – proclaiming that extending “liberties and unalienable rights” promised in the Constitution to free blacks “would be a means of drawing down the blessings of Heaven upon this land.”

Congress rejected that petition during a contentious debate in January 1800 inside Independence Hall, which featured a South Carolina congressman urged dismissal, claiming that it was probably written by white Quakers, since blacks “couldn’t write.”

In fact, the author of the petition was colonial-era black Philadelphia leader Absalom Jones, the founder of the first black Episcopalian church in America, Philadelphia’s African Episcopal Church of St. Thomas established in July 1794.

Jones co-authored the 1794 response to the white journalist with his leader-minister colleague Richard Allen, who founded the African Methodist religious domination in America.

“I hope this helps for historic discussions being more honest and more truthful,” he said.