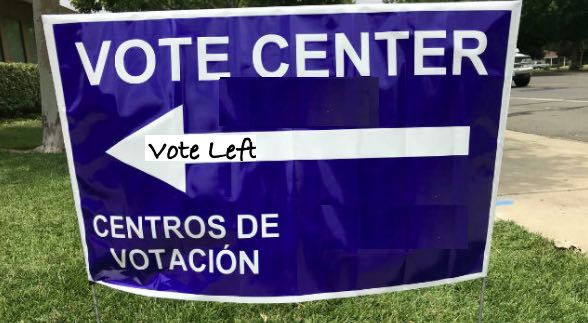 If you are on the left with nowhere to go, as Laurence O’Donnell explains in a ‘viral’ meme, you have to show that you are capable of not voting.

As Caitlin Johnstone has warned on April 13, in her article, at caitlinjohnstone.com , there will be a barrage of manipulation designed to pressure you to abandon your position.

As Seth Myers demonstrates, as he mimics Trump to a “T” the man you would be helping to elect by not voting is someone who deserves every epithet you can think up: scurrilous, venal, base, horrific, preposterous, vile, and so on. All true.

As Stephen Colbert so eloquently makes the case, with guests from Pod Save America, you are not someone who deserves this country if you do not force yourself to accept Biden, although the argument used for rejecting Trump is a clear rationale for also rejecting Biden. Jon Favreau (POS co-founder) said that “optimism is one thing, but you cannot allow someone to give you false hope.” Jon Lovett (another POS co-founder) warned about chilling consequences with Supreme Court under continued Republican control.

Jenn Dize (on Status Coup), relaying the news that Justin Chariton has come down with COVID-19, has expressed that she and others are confused about the right way to proceed.

Joe Rogan has said he can’t vote for that guy (Biden) and he will probably vote Trump because Joe cannot finish a sentence.

Governor Andrew Cuomo does not spell it out, but he makes it clear that the Federal level disaster handling is bad, leaving States to scrounge for themselves, which is Trump’s fault. Of all the messages, his way of explaining how things are rolling out is the message that I consider the most. What will keep occurring if nothing changes?

I know one thing: when we vote left, we get more of the same, it is just packaged better.

Even when you make crap palatable you are still eating shit. That’s what I have learned. Obama still wears the crown in the Democratic kingmaker camp, and has convinced people he is the ideal President, that is, until you look at his actions and if you remain unfazed by his glamor, as Jimmy Dore details the evils he extended and did not extinguish on his watch.

I could refer to more reactions on the left and include names of all the youth organizations that are not giving in to the pressure to fold their vote into the “progressive” vote Biden camp and stop resisting. Here is a sample.

My decision, though, is that it is not enough at this point to quit and follow Bernie in his call to join him in supporting Biden.

In 2016, the Green Presidential Candidate, Dr. Jill Stein, pointed out that the lesser evil argument only paves the way for MORE evil next time, because you fell for it once and they use this information to use on you again. Fool me once, and once again, and again…

The way to victory does not lay in accepting Mr. Lesser and Mr. Least Evil, as they band together to win your vote. Manipulation by pressure rather than by policy is unacceptable when it comes to your sacred vote.

It doesn’t make it any more appropriate when former President Obama uses these same pressure tactics, which felt to me more like a deft and clever power grab than an actual endorsement. Was anyone else as unconvinced as I was about this repulsively disguised disempowerment technique?

Then again, neither is it okay to accede a second term for Trump.

I believe that the only alternative is to sit tight and watch things play out for a while longer. Everyone is in such a rush, yet in reality there is no need to hurry. They can throw the kitchen sink at you and threaten you about dire consequences until the cows come home, but, as Caitlin Johnstone says, until they address what you are demanding, their fury is their problem. They are playing volleyball and you are cleaning the beach.

Younger people often do not understand the endgame problem inherent in this ploy: if you let them know you buy in and they realize what it takes to win you over and they’ll just get better at it.

Watch Biden, a most interesting man. He is not able to hide his style of blatant lying. Biden is like a boisterous drunk who is overly and loudly aggressive in a restaurant and thinks they are just being humorous and happy.

He has been coached to take it down a notch, and you can tell he is following the script to the hilt.

He has shown his hand, though, and Bernie’s too, by talking warmly about their wives and each other: they are actually friends.

Bernie’s earlier criticism of Biden has been posturing. In reality, the policies he has fought for were not that important to him or Bernie could not befriend someone who has been so critical and dismissive of them.

Bernie has clearly long ago realized he could play two sides (the friend of the establishment and the infuriated masses) against each other and feels good about it. I think that he bases his worth on his ability to play an effective con game, convincing the youth, especially, that he is the real deal and will fight for them.

In a way, sad to say, this false promising is an abuse of their youth and idealism, no different from other politicians that drop their campaign promises like so much empty rhetoric.

The awful truth that showed Bernie’s hand was his support of the stimulus measures that have handed our country much farther into the control of the 1%.

Bernie has sold out, like Obama, but on the way to doing that he first made believers out of many of us. The galling thing is that he is most effective on those of us who are naïve, for whom hopeful possibilities overwhelm our good sense.  We believed he was for real.

This is how sexual assault happens, when you believe someone is a good person and do not trust your own experience and your own skepticism.

You encourage, unconsciously, the abuser, by thinking that your own positive outlook can spread goodness over and upon others; this similar gullibility includes your faith in the political Party you want to reform, and denial of evidence to the contrary.

I have had to change my core beliefs. I have wanted to think that nothing is impossible and that has been how I can identify with myself in a way that I can consider “good” and “decent”. When I see those words bastardized, such as when Biden appropriates the ‘Not Me, Us’ slogan of the Sanders campaign I realize that nothing is sacred to these people. I am alone, and my identity is up to me to decipher.

I will continue to look at these people and listen to their arguments as they try to win me over. It’s a jousting contest right now. My virtue is being fought over. The danger is in taking this personally. My vote, like a type of virginity, is the only thing they want–my surrender to becoming a slavish echoer and enabler of their campaign propaganda.

Until the game ends, I will be gamed.

The only solution? Refuse to play. Refuse to vote, refuse to participate. Feel good about that. Sorry Bernie but you no longer have power over me. It’s high time I called this game as a loser’s deal. This is no longer a tame “movement”; it’s a full-on REVOLUTION.

Too bad you got off the bus, Bernie.

Update 4/15: Bernie has now decided not only to get off the bus, he is attacking people, including former campaign staffers, who are not falling in line behind him. This deserves a new article. Many of my most respected indie news sites, especially The Hill Rising’s Saager Enjeti and Krystal Ball are seeing clearly and calling this the existential fight it truly is.

Bernie, I thought you would be on our side this time, but at least you organized the group that will take you and buddy Biden to task. You readied us for this fight by your betrayal, and we have no more lifeblood to expend for your corrupted campaign.