The “persistence and regularity” of brutality and corruption in the Philadelphia Police Department (PPD) indicate that “the city and its police force are failing to act to hold police accountable,” that report stated.

The almost total failure of officials in Philadelphia to hold errant police officers accountable, the report noted, solidifies a “culture of impunity” that leads to new generations of police officers learning quickly that “their leadership accepts corruption and excessive force.”

Those tough assessments of “shortcomings” within the Philadelphia Police Department are not contained in the damning report on deadly police practices in Philadelphia released on March 24th by the U.S. Justice Department. Rather, the harsh assessments of PPD failings, which would seem to merit prompt attention and reform, were in a report issued in 1998 by the organization Human Rights Watch.

The stark failure of authorities in Philadelphia –- successive police supervisors and City Hall officials, and three mayors –- to halt the police misconduct identified seventeen years ago by HRW makes the policing problems identified in the latest USJD report entitled the “Assessment of Deadly Force in the Philadelphia Police Department” all the more damning and appalling. 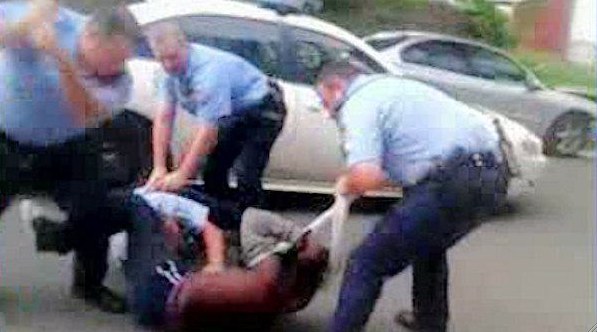 Philly's finest being cop, judge and gangbangers on an 18-year-old in 2012

The latest report by the Justice Department contains 91 recommendations for reform within the PPD –- an agency that was found to have seen its officers involved in 394 shootings during a seven-year period where 81 percent of the targets were African-American men and 59 percent of the police shooters were white. Better training for police officers was one of that report’s recommendations in response to a finding that police too frequently used deadly force in inappropriate situations including deadly force against unarmed persons.

That USJD report emerged from a two-year examination of the PPD that uncovered serious “operational deficiencies” that have produced an average of one citizen shot by police per week between 2007 and 2013. Those police shootings and other questionable police conduct, the USJD report stated, contributed to “significant strife between the community” and the PPD.

Among the many examples of failures by officials to forthrightly attack police misconduct and abuse is the conduct of Philadelphia’s mayor in 1998, Ed Rendell, who prior to serving as mayor was the city’s elected district attorney.

Rendell, who later served two-terms as Pennsylvania’s governor, as mayor had blasted that ’98 HRW report as inaccurate. It’s the same response he had for another report critical of police misconduct in Philadelphia released that year by Amnesty International. Rendell’s dismissive stance to charges of police corruption and abuse of citizens was typical of a man who begun his political career with a successful campaign to be Philadelphia’s District Attorney in the late 1970s in which he railed against the police brutality then rampant in the city during the regime of the infamous cop-turned-mayor, Frank Rizzo.

During the 1970s, police abuse in Philadelphia, from brutal beatings to fatal shootings, was so bad that the US Justice Department sued Mayor Rizzo plus nearly two dozen top City Hall and Police Department officials, charging them with actively aiding police brutality. That 1979 lawsuit was the first-ever filed against a mayoral administration by the USJD in American history. A federal judge in Philadelphia curtly dismissed that lawsuit on a specious technicality, exposing one of the least examined elements of police brutality: judges who all to readily turn a blind-eye to abusive misconduct.

“Those who claim that each high-profile human rights abuse is an aberration, committed by a ‘rogue’ officer, are missing the point: human rights violations persist in large part because the accountability systems are so defective,” that 1998 HRW report correctly stated.

The report on human rights violations inside the United States released in March 2014 by the United Nations’ Human Rights Committee listed “Excessive use of force by law enforcement officials” as a grave problem across America. “The Committee is concerned about the still high number of fatal shootings by certain police forces…and reports of excessive use of force by certain law enforcement officers…”

The 1998 HRW report, which cited police brutality as one of the most “serious and divisive human rights violations” in the United States, stated, “Police officers engage in unjustified shootings, severe beatings, fatal chokings and unnecessarily rough physical treatment in cities throughout the United States, while their police superiors, city officials and the Justice Department fail to act decisively to restrain or penalize such acts or even to record the full magnitude of the problem.”

Philadelphia’s Police Commissioner Charles Ramsey requested the USJD review of his department. The Obama Justice Department had ignored repeated pleas and petitions to investigate PPD fatal shootings and brutality from activists in Philadelphia, including the local chapter of the National Action Movement founded by Civil Rights leader, the Rev. Al Sharpton.

Commissioner Ramsey, who co-chaired President Obama’s recently established panel on police practices, directed Philadelphia’s controversial and ineffective ‘Stop & Frisk’ racial profiling program that targeted over 200,000 pedestrians, primarily African-American males, in 2014 alone. Only five percent of those contentious encounters initiated by police uncovered either weapons or drugs –- the contraband that was the stated purpose for the “Stop & Frisk” policy.

Ending racial profiling was a recommendation of both Obama’s panel and the U.N. Human Rights Committee.

Philadelphia’s divisive “Stop & Frisk” is the prime anti-crime initiative of current Philadelphia Mayor Michael Nutter, who hired Ramsey. Nutter, when a Philadelphia City Councilman in the mid-1990s, bucked opposition from Mayor Rendell to resurrect the city’s civilian police oversight entity. But as mayor himself later, Nutter acted to neuter the oversight entity he had helped create by cutting funding.

However, in Philadelphia, Commissioner Ramsey and Philadelphia’s District Attorney Seth Williams are African-American, as is Mayor Nutter.

The focus on police misconduct in Philadelphia overshadows other corrosive practices by law enforcement and their supportive politicians around the state of Pennsylvania.

The Pennsylvania Attorney Generals Office is currently in court fighting against a new trial for two inmates serving life sentences for a 1995 murder that evidence indicates they did not commit.

The effort by Lorenzo Johnson and Corey Walker to get a new trial is based on evidence of innocence and misconduct by police investigators that the AGs Office withheld during the trial that led to their conviction. Included in the AG’s attempt to block a new trial is an effort to strip Walker of his attorney, Rachel Wolkenstein. The AGs Office claims Wolkenstein’s history of criticisms of improprieties in the justice system plus her work with political prisoner Mumia Abu-Jamal make it “intolerable” for her to practice law in Pennsylvania.

That 1998 Human Rights Watch report that examined police misconduct in 14 cities, stated, “Severe abuses persist because overwhelming barriers to accountability make it all too likely that officers who commit human rights violations escape due punishment to continue their abusive conduct.”

While Pennsylvania’s Attorney General Kathleen Kane (herself the subject of a criminal investigation over charges of leaking grand jury testimony) appears intent on retaining the recalcitrance of prosecutors, fellow Democrat and Philadelphia Mayor Michael Nutter, nearing the end of his last term as mayor, has announced his intention to address reported failings within the city’s police department.

Nutter, following release of the Department of Justice report, quickly appointed a panel to oversee implementation of the recommendations made in the report. If successful, Nutter’s initiative would do something the majority of his Philadelphia mayoral predecessors have not: bring accountability to policing in the city that birthed America’s democracy.

If it happens, it will be a reform long overdue, especially for the hundreds who may have died unnecessarily at the hands of Philadelphia cops.

Americans Need a Say in How Far the US is Going to Go in Backing Ukraine!
Russian president Vladimir Putin is playing a dangerous game by making threats to use ‘small’ so-called theater nuclear weapons with explosive power this fraction of the power of the…
All Dave LIndorff's Posts