In a stunning conclusion to a year-and-a-half legal drama, a federal judge in Scranton, on late Tuesday ordered the Pennsylvania Department of Corrections to quit stalling and to begin treating prisoner Mumia Abu-Jamal with the latest available and highly effective anti-viral drugs for curing him of a raging and life-threatening case of Hepatitis C.

Abu-Jamal, back in early 2015, fell into a diabetic coma, the result of an undiagnosed case of active Hepatitis C which he contracted sometime during his 36 years as a prisoner in the Pennsylvania prison system.

Convicted and sentenced to death back in 1982 for the 1981 murder of a white police officer at what was a highly controversial trial fraught with perjured prosecution testimony, withheld evidence and under the control of a clearly biased judge, Abu-Jamal, at the time a prominent Philadelphia journalist, in 2001 had his death sentence overturned on constitutional grounds and was instead given a sentence of life in prison without parole. But prison authorities, aided by the state’s judicial and law-enforcement establishment, have continued to torment him and harm him in any way possible, for example keeping him in solitary on death row for several years of appeals after a federal judge had already tossed out his death sentence, and even then keeping him in solitary as long as possible before finally transferring him to the general prison population after his death sentence was finally confirmed by the Third Circuit Court of Appeals.

When it became clear that Abu-Jamal was seriously ill with Hepatitis C — an epidemic in prisons across America and in the Pennsylvania prison system where at least 7000 prisoners are known to have active cases of the deadly disease — efforts by his supporters, family and legal team to get him treatment began immediately. But these efforts have been stymied at every turn by a prison bureaucracy loathe to offer medication that reportedly can cost $80,000 or more for one full course of treatment. (Of course, unmentioned is the reality that the cost of Abu-Jamal’s two hospitalizations for the serious conditions caused by non-treatment of the disease have already cost taxpayers $170,000, as will also be the case for other infected inmates who are left untreated).

Bret Grote, legal director of the Abolition Law Center, a Pittsburgh-based Pennsylvania prison advocacy organization, says that the preliminary injunction issued by Federal District Judge Robert Mariani, the first such order nationwide demanding state-of-the-art anti-viral treatment for a prison inmate with Hep-C, while subject to almost certain appeal by the state DOC, stands as a powerful condemnation of the “Nazi-like” medical neglect of state inmates suffering with Hepatitis C, if not stayed during any subsequent appeal, could lead to treatment beginning soon for one of the world’s most prominent prisoners. 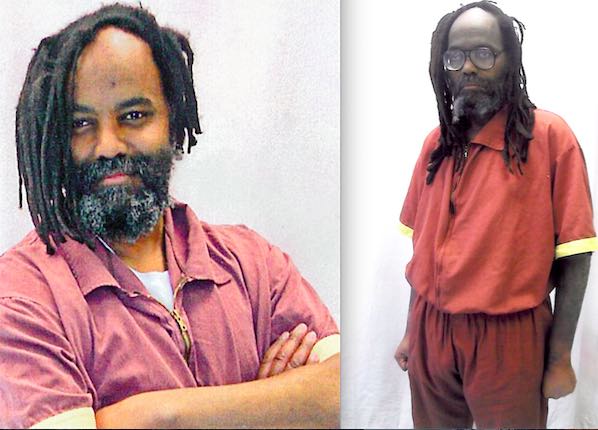 Mumia Abu-Jamal as he looked before and after his untreated Hep-C caused diabetic crisis, during which he lost over 50 lbs.

Certainly Judge Mariani made sure any appellate court panel would have solid grounds not to allow for any further delay in treatment starting during what would be a lengthy appeals process. In his order, the judge, referring to the DOC’s current “protocol” for treatment of prisoners with Hep C wrote scathingly:

[T]he effect of the protocol is to delay administration of DAA medications until the inmate faces the imminent prospect of “catastrophic” rupture and bleeding out of the esophageal vessels. Additionally, by denying treatment until inmates have “advanced disease” as marked by esophageal varices, the interim protocol prolongs the suffering of those who have been diagnosed with chronic Hepatitis C and allows the progression of the disease to accelerate so that it presents a greater threat of cirrhosis, hepatocellular carcinoma, and death of the inmate with such disease.

As Grote and his fellow attorney in the case, Robert Boyle, note, “The judge also rejected the DOC’s argument that recent changes to (their treatment) protocol had resolved the constitutional violation, holding that the new protocol “suffers from the same fatal flaw as the interim protocol” because it “refuses, without medical justification, to provide treatment… and also imposes an unreasonable condition—having vast fibrosis or cirrhosis—on treatment.”

As Grote points out, under the DOC’s supposed treatment protocol, only 1% of infected inmates — fewer than 50 statewide — have been receiving the anti-viral medication that is considered by the Center for Disease Control to be the appropriate standard of care for active Hepatitis C infections. “It’s really a non-treatment protocol,” he explains, saying that “limiting the medication to only those who not only have evidence of cirrhosis of the liver, but also esophageal varices, which are swollen esophageal veins prone to rupturing and causing almost immediate death in victims is really a Nazi prison camp level of care.”

Typically the only treatment provided by the DOC to Hep-C infected inmates has been an old regimen involving interferon, which has a very low success rate and which involves very serious complications in most patients. In contrast, each of several new anti-viral drugs for treating Hepatitis C, while costly, boast an effective cure rate of higher than 90%.

It’s not clear how far the DOC will be willing to pursue an appeal of this case. There are certainly plenty of people in the law-enforcement, justice and penal systems who would be happy to see Abu-Jamal (who was frequently was the target of unseemly calls to “Fry Mumia!” at demonstrations in Philadelphia by white off-duty cops in the Fraternal Order of Police over the years) get “executed” by medical neglect in prison. But having said that, letting the Third Circuit Court of Appeals, which has jurisdiction in southern Pennsylvania, Delaware and southern New Jersey, weigh in on this case risks having a three-judge panel uphold Judge Mariani. And that would then mean his decision would suddenly apply not just potentially to prisoners incarcerated within his jurisdiction in northeastern Pennsylvania, but to all inmates in prison in that whole tri-state appellate court jurisdiction who suffer from similar active Hepatitis C infections — perhaps saddling those three state prison systems with as more than $1 billion in treatment costs (unless the states managed to negotiate reduced-cost anti-viral medication from the drug industry).

Clearly, whatever happens next, this has been a big victory for jailhouse journalist Abu-Jamal, his legal team and his supporters. It also offers hope of treatment to thousands of other inmates infected with the dread disease who so far have had their cases shamefully ignored by the DOC and by the politicians in Harrisburg who are responsible for the conditions of their incarceration.

Dave Lindorff is author of the book Killing Time: An Investigation into the Death Penalty Case of Mumia Abu-Jamal (Common Courage Press, 2003)

NOTE: To listen to Dave Lindorff’s interview with Bret Grote who discusses this latest federal court ruling this past Wednesday on PRN.fm’s “This Can’t Be Happening!” program, click here