With British Petroleum spewing more than 200,000 gallons of oil a day into the Gulf of Mexico in what could be an ecological cataclysm,  it is useful to look at the hypocrisy of the energy companies when it comes to an even worse crisis threatening life itself on the planet–rapid climate change due to increasing carbon in the atmosphere.

For years, the oil industry, and especially its largest company, Exxon Mobil, has been funding foundations and scientists that seek to refute the mounting evidence of global warming.  A recent Greenpeace study, released in March, found that Exxon Mobil was second only to Koch Industries in offering financial backing for these climate change deniers.  Between 2005 and 2008, Koch Industries, a privately held oil firm based in Texas, gave $24.9 million to anti-global warming scientists and foundations. Exxon Mobil, over the same period, gave $8.9 million.

Heavily criticized for its climate denial propaganda and lobbying, Exxon Mobil claimed in 2006 that it would no longer fund such activities. It has continued to do so, however, though a stealth campaign of funding foundations like the Atlas Economic Research Foundation and International Policy Network in the UK and the Cato and Heritage Foundations in the US, all of which themselves give money to the climate change deniers.

Other oil companies, like Shell, Chevron and others, do the same thing but at a lower level and with a lower profile than Exxon Mobil.

But here’s where the hypocrisy and lying become chutzpah.

Exxon Mobil, BP, Shell, Chevron and other big oil companies are all investing in leases and equipment and making long-range plans to exploit oil reserves under areas of the Arctic Ocean and in Greenland that have long been inaccessible because of ice cover. These companies, while financing the work of the climate-deniers for their narrow short-term interest, are preparing longer term for the day that the Arctic Ocean and Greenland will be ice-free because of global warming. Their own company scientists know it’s coming and their executives want it to come, so they can get at those deposits of oil and natural gas. Indeed, arguably, they may see it as in their corporate interest to hasten the pace of global heating, the sooner to get at those untapped reserves.

They are also developing ways to tap the methane that has for millennia been trapped under the permafrost and under the Arctic sea floor as methyl hydrates, a mix of methane and water ice.

None of this planning and investment would make any sense if the polar region were not warming dramatically, but Exxon Mobil, Chevron, BP, Shell and the other oil companies all know that it is melting away, and they’re not going to let ideology and politics and their own lies and propaganda get in the way of grabbing what are likely the biggest untapped energy deposits left on the planet.

As Popular Mechanics magazine has written, the oil companies “are attracted by high projected demand for oil in the coming decades and the retreat of the arctic ice.”

Both BP and Shell are taking advantage of retreating summer ice in the Arctic to begin drilling exploratory oil wells this summer in arctic waters.  Shell is also planning to drill three test wells. 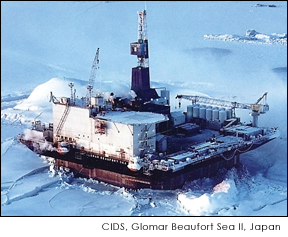 Exxon Mobil and Chevron are planning to drill in newly ice-free waters off Greenland. They are also eyeing the Greenland landmass, which is suspected of holding up to 50 billion barrels of oil underneath its melting ice sheet.

As I mentioned in an earlier article, a major well blowout during late summer in arctic waters would be disastrous, since the ice would close in, trapping the leaking oil underneath a sheath of ice for the winter and then releasing it all at once during the summer melt, and preventing any kind of containment measures for 8-9 months during the winter.

All this they’re doing while simultaneously lobbying governments around the world not to pass any real effective climate-change legislation, and telling the public that global warming doesn’t exist or is somehow benign and nothing to worry about.

As a leaked 1998 Exxon Mobil memo stated, “Victory on blocking climate change legislation will be achieved when uncertainties in climate science become part of the conventional wisdom for average citizens and the media.”

It doesn’t get uglier than this.

It is as though Goldman Sachs were lobbying against financial regulation while telling clients that investing their money in worthless mortgages that could never be repaid was a good idea.

Oh wait. That’s what Goldman Sachs has been doing for years. The oil industry, though, is worse. All Goldman Sachs did was blow up the global economy. Exxon Mobil as it and its cohorts lie to the public and block global warming action, could doom us all.