It’s a pretty sad spectacle watching the US Congress toading up to the National Security Agency. With the exception of a few stalwarts like Sen. Bernie Sanders (I-VT) and to a lesser extent Ron Wyden (D-OR), most of the talk in the halls of Congress is about how to keep the army of Washington private contractors from accessing too many of the government’s secrets (which need to be protected by government employees!), and about whether to try NSA whistleblower Ed Snowden for treason.

NSA Director James Clapper was able to lie bald-facedly to the Senate Intelligence Committee last week without even a reprimand, much less a contempt citation, claiming that the NSA does not spy on millions of Americans’ telecommunications. That type of behavior by members of the executive branch makes a laughing stock out of Congress, but the members of Congress don’t seem to care. They know that they are already viewed as corrupt and loathsome toadies by the broad spectrum of Americans who continue to elect them to office, their collective approval rating now having fallen to a record low of 10% (who are those 10%, anyhow, the extended families of the members of Congress, or dead people in Chicago whose names are being forged on polling forms?). I guess the attitude among Congresspersons must be that they don’t have anything to lose by being accommodating to the march of the national security state. They have hit bottom already.

Poor Snowden, who has put his life on the line in an attempt to try and wake up the somnolent American public to how our free society has been hijacked by a fascist consortium of security agencies and private corporations, has to watch as the broad mass of Americans turn away from the news and switch to the endless stream of police dramas, where the Constitution is viewed as an anachronistic impediment to justice, and the cops are all good guys dedicated to protecting the rest of us.

The frightened and vengeful police state is intent on shutting Snowden down.

Fortunately, Snowden is no slouch, and has given himself some personal insurance in the form of downloaded information that, as he put it in his initial television interview from Hong Kong, could “shut down” the US intelligence machine overnight. 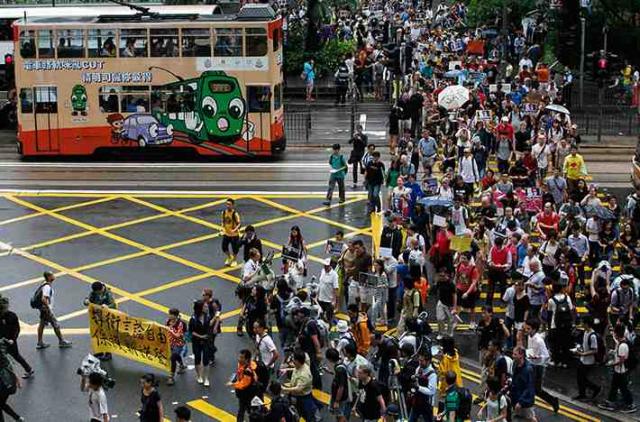 Hong Kong residents march to a rally in front of the US Consulate in defense of NSA whistleblower Ed Snowden, demanding that Hong Kong authorities and Hong Kong courts not extradite him back to the US.

He’s already shown his enemies in the White House and the NSA his power, dropping the information to the South China Morning Post that his files show the US has been at least as an aggressive an international hacker as has China, hacking into the main Internet switching systems in both China and Hong Kong.

That news seems to have gotten China’s attention, with the initially aloof Chinese government now publicly chiding the US government for hypocrisy in its charges of Chinese hacking of US private company and government computer systems. The US has to know that Snowden wouldn’t be keeping the only copy of his damaging data in his safe house room with himself. He has certainly shared it all, not just with journalist Glenn Greenwald and the two newspapers — the U.K. Guardian and the Washington Post — which together published his initial information about massive NSA spying, but also with others. It has to know that if it goes after him, Snowden’s associates will blow things up by going public with things like the identities of all CIA spooks and their locations around the globe, and the international targets of NSA surveillance abroad — which will include many US “friends.”

NSA whistleblower Ed Snowden is no longer a US story in Hong Kong. He’s a big local story now, and that will likely derail US extradition hopes

Already, Hong Kong people, initially reported to be not terribly interested in Snowden, are getting worked up at his report that their internet system was targeted and that their communications are being heavily monitored by the US. They are also rallying to his defense. Tomorrow, a big march, ending with a rally in front of the US Consulate in Hong Kong (where Snowden has already stated that there is a large CIA operational station), is planned. That will, I am sure, be the first of many.

I don’t think Snowden is interested in turning over NSA information wholesale to China, but even if he offers China some details about American government hacking of Chinese computer systems — say the hacking of the public internet switching centers, which would be illegal under an international treaty signed by the US — he will be seriously damaging the NSA, though without doing something that could be considering “aiding the enemy.”

Some corporate media pundits in the US, where punditry appears to have become synonymous with propagandist, are suggesting that Snowden could be arrested and taken China and forced to spill what he knows about the NSA, but I don’t think that is how these things work. If the US pushes too hard to bring Snowden back to the US to face trial and life in prison, or by trying to kidnap and render him to the US, he may be driven to accept a Chinese offer of sanctuary, either under protection in Hong Kong, or inside the People’s Republic. In that event, he will be wined and dined and encouraged to tell what he knows.

To do otherwise, turning to compulsion, would not be in China’s interest. If word ever got out that people who voluntarily offered to provide information to China were subsequently tortured to learn more, no one would ever again offer to help China. That’s why when people flee their home country and go to a rival state offering information, they are almost always treated well, provided with housing and an income, and largely left alone.

The biggest threat to the NSA and to the US national security state is that they go after Snowden too aggressively. They have already reportedly gone through their massive computer system and discovered what secrets he downloaded before he left his job. They are probably now in a state of deep freak-out.

My guess is that they will realize they are stymied and that their best bet is to lay low and hope that this all blows over, which it well might, the corporate media being as lame as it is. (On the other hand, they are in a bit of a bind, because if they don’t come down really hard on Snowden, and instead cut some kind of deal and let him slip away, it could open the floodgates of whistleblowers in the agency, where many workers may be dealing with deeply troubled consciences as the spying on Americans deepens.)

Our job then — those of us who want to see this growing neo-Stasi police-state system overturned and unraveled — is to keep Snowden’s revelations front and center in the news, with articles, exposés and protests. At some point, we have to hope that the American people will wake up to the reality that the “Land of the Free” is becoming just an ironic expression, or hope that at least some other principled people at the NSA or the FBI will decide to join Snowden in blowing the whistle even more on what is happening.

Fluent in Chinese, DAVE LINDORFF spent two years living in China and five more working as a correspondent for Business Week based in Hong Kong.