Vienna — As an American visiting Krakow, Poland, where I was last week, it felt weird to read about the inane latest chapter of the so-called culture wars being fought back home over whether states and localities should have the right to bar transgender people from using a public lavatory appropriate to their psychological identity, forcing them instead to use the one that accords with how many X chromosomes they have by birth in their cell nuclei.

After all, in Poland, except for the tonier tourist restaurants and hotels catering to well-heeled American tourists, bathrooms tend to be unisex: men and women enter such a toaleta through a single door into an anteroom, where they find a few stalls each containing a single commode. In some such facilities, there are also urinals along a wall in the anteroom, allowing men to relieve their bladders while not unnecessarily denying one of the limited number of stalls to any woman in similar need of relief. Meanwhile, women and men, without a blush, wash their hands side by side in the available sinks in the common anteroom.

Poland is a very conservative Catholic country, quite fundamentalist in its own way, yet somehow this system works there, and without any reported incidents of the indecency or sexual abuse that America’s squeamishly fundamentalist Christian folk apparently fear. (Then again, maybe I’m being unfair to Christian fundamentalists. After all, the irony of this whole bathroom discrimination brouhaha in the US is that it is being whipped up by Republican politicians, yet all the prominent cases of bathroom sex crimes in recent years have involved…you guessed it: Republican politicians! So maybe the simple solution would be to just require separate bathrooms for them.)

Now I’m not trying to suggest that Poles are necessarily better or saner than Americans. They do, after all, have a not terribly remote history of having largely supported the slaughter, by occupying Nazis, of the Jews who had lived in their midst for centuries. Indeed Krakow itself was the scene of one such particularly brutal and bloody extermination campaign (it was where the German conman Oskar Schindler set up his slave-labor factory, which allowed him to gain fame for eventually coming around to saving many Jews from a mass grave). And anti-semitism (along with other forms of xenophobia) is still alive and well in the country. But at least the Poles aren’t freaking out about transgendered people sneaking into the wrong loo.

While sanity regarding public restroom facility use in Europe comes as a welcome relief (the French too have a casual attitude towards sexual privacy in their public facilities, with women frequently stationed near the men’s pissoire where they collect tips for their janitorial services while men pee against a wall right beside them), other political storms in Europe can display a certain familiarity to a visiting American. In Poland a right-wing nationalist leader was recently elected and the country has distinguished itself from most of its European Union neighbors by simply closing its border to and refusing to admit refugees — Middle Eastern or otherwise (even as its own surplus workers avail themselves of their visa-free right to move to the UK to find work).

In Austria, which I visited later on this trip, the refugee issue, among other things, contributed significantly to a stunning election surprise late last month as angry voters who since 1949 had almost routinely installed alternating center-right Austrian People’s Party (OPP) and center-left Social Democratic Party of Austria (OSD) majorities in their parliament election after election, instead this time around, in a presidential election, relegated those two main parties’ candidates to an embarrassing fourth and fifth place, and handed the largest number of votes to what one Austrian acquaintance called candidates of the “crypto-fascist” Freedom Party and the “genuinely radical leftist” Austrian Green Party. A runoff between those candidates of the two formerly fringe extreme parties of left and right last Sunday led to a result so close that the victory by Green Party candidate Alexander van der Bellen came only when mailed ballots were counted today.

Similar frustrations with the political status quo among voters have led to an upcoming and hotly contested referendum in a few weeks in the UK on whether Britain should leave or stay in the European Union. Many angry white working-class (and some radical leftist) Brits are calling for “Brexit,” or a British exit from Europe. Meanwhile, equally angry French voters increasingly are turning to the nativist and ultra-right anti-European Union, anti-immigrant National Front Party of Marine Le Pen.

In a way, one can recognize in such right-wing politics an echo of the Donald Trump phenomenon in the US. But at the same time, there is another trend here that seems to echo the Bernie Sanders movement that this primary season has been calling for a “political revolution” in the US.

In both Europe and in the US, many white working-class people are feeling threatened by growing numbers of non-white immigrants (and of course, in the US case, by the native-born blacks and Latinos all around them). They see their former privileged positions threatened by newcomers who practice different religions, wear different clothes, and sometimes speak the home country’s language with an accent. And they want to turn back the clock to a mythical time of racial, ethnic and national “purity.”

But the anger is not all reactionary. As in the US, there are in Europe also millions of people on the left — white and non-white — who see the existing political system there as hopelessly corrupt, in thrall to the rich and powerful, and increasingly removed from any real democratic control. In Europe, such voters see the European Union as usurping their own countries’ sovereignty and citizens’ democratic rights, in favor or a remote and uncaring bureaucracy in Brussels. In the US, the driving force behind Sanders’ astoundingly successful campaign for the Democratic Party’s presidential nomination has been a similar sense that the US government and the two dominant political parties, no longer really represent the interests of ordinary people, and are instead increasingly owned, literally, by the rich and by large banks and global corporations.

Could Sanders win a 3-way race running as a Green or independent?

The established two-party system in the US makes an outcome such as the April 24 results in Austria, which crushed to two mainstream political parties, pretty unlikely. There remains a small chance that Bernie Sanders and his millions of backers, increasingly angry and frustrated at the corrupt Clinton campaign and the biased leadership of the Democratic Party, could walk away should he, as anticipated, fail to win the party’s presidential nomination, and that he could instead try to run in the general election as an independent or better, as a candidate of the Green Party. Certainly the movement that has backed him increasingly wants him to do this. If it did, there’s a chance too, with both Clinton and Trump so loathed by large segments of the American public, that Sanders could win without either major party’s support.

That would be a radical moment in American politics! If it were to happen, maybe afterwards, we could chuck the his-and-her bathroom nonsense, open up public lavatories to everyone, and focus on more important stuff like seriously attacking climate change and ending America’s obsession with endless wars. 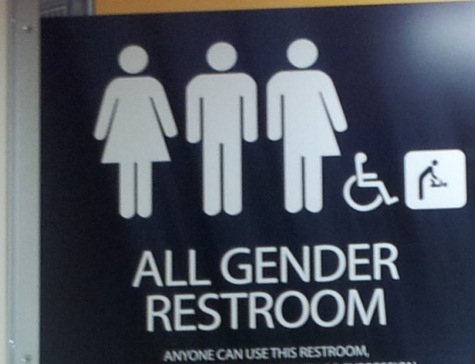