Most Americans probably assume that any soldier hit by a rocket-propelled grenade (RPG)—peppered with metal fragments, brain bruised by the shockwave from the explosion, and suffering multiple ruptured discs in the neck and spine—would be whisked from the battlefield to a hospital somewhere in Europe or the U.S., treated, and cashiered out of the military with a Purple Heart.

Staff Sgt. Chas Jacquier learned what really happens, though. When an RPG landed next to him in Afghanistan in 2005, spraying him with shrapnel and delivering a concussive blast, he was medevaced to a field hospital and diagnosed with a suspected traumatic brain injury and an injured spine. But when it came to treatment, he was simply loaded up with a medley of pain pills, morphine, “and some other stuff I don’t know about” and sent back into combat just a few days later, expected to resume leading the unit of 25 men under his command.

“They helicoptered me back to my forward base in a sling,” Jacquier recalls. “When we landed, I got out of the sling, grabbed my rifle and climbed into a truck with my men. Fifteen minutes later, we were in a firefight.” He finished his deployment without getting further treatment (other than more drugs) for his injuries, which he said included a fractured neck vertebra. Jacquier is certain that his untreated injuries worsened during this period. 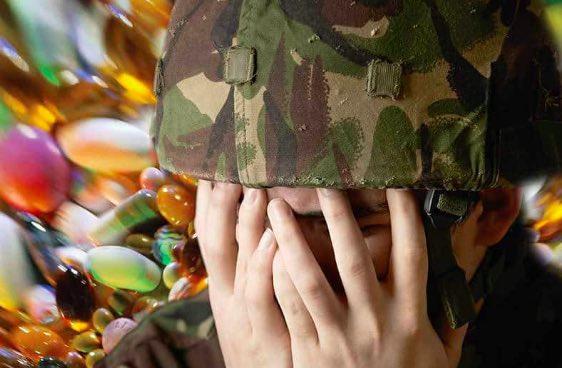 In 2005, the German news magazine Der Spiegel wrote about how the Nazis developed a powerful methamphetamine, Pervitin, and distributed it to Wehrmacht soldiers like candy (35 million pills over the course of the war) to allow them to fight fiercely for days without sleeping. The Allies, for their part, were handing out the potent amphetamine Dexedrine in equally liberal amounts to their troops.

Today, the pharmacopeia of war is much vaster, encompassing not just amphetamines, but also stimulants like Ritalin, antipsychotics like Risperdal, and anti-anxiety drugs like Xanax and Librium, as well as antidepressants like Zoloft and Lexapro. There are the drugs used to “treat” soldiers on the battlefield—antidepressants and anti-anxiety drugs for post-traumatic stress, opioids for pain, a variety of amphetamines to keep soldiers awake, and Ambien and other sleep aids to allow them to rest occasionally, when they aren’t actually fighting.

“Something is clearly amiss,” says Kathy Platoni, an Army colonel in her 60s who deployed four times to Iraq and Afghanistan as a clinical psychologist on the front lines, treating soldiers for all the stresses and traumas of war…

For the rest of this article by DAVE LINDORFF, which appeared initially in High Times magazine, please go to: High Times