“The wranglers over creeds and dogmas are perhaps the most persistent of all agitators; the bedrock idea being that a wrong exists which must be found and exterminated.”
— Eugene Debs

“Get it straight, I’m not a humanitarian, I’m a hell-raiser.”
–Mother Jones

I’m going to take issue here with the mainstream media commentariat (and even some on the left) about the issue of “civil discourse.”

There are two main arguments being made, and both are wrong.

One is that our politic process is being damaged by violent and intemperate rhetoric, and the other is that this violence is coming from both the right and the left.

On the first point, there is a big difference between violent rhetoric and intemperate rhetoric. Violent rhetoric is where a speaker actually tries to incite her or his listeners to violent action. Intemperate rhetoric is simply rhetoric that is not temperate, as in polite, respectful, calm. That is, it is angry, it perhaps heaps scorn on some other party, it condemns the actions and motives of an opponent, and it seeks to rile up its intended audience.

There are times, I would agree, when violent rhetoric can be akin to the proverbial shout of “Fire!” in a crowded theater, and such speech–the kind of speech that used to be used to rouse a crowd to become a lynch mob–should rightly be viewed as a criminal act. But riling up a crowd to kill somebody is different from riling up a crowd to, say, damage construction equipment that is about to destroy a poor neighborhood to make way for a casino development, riling up a crowd of workers to break into a plant and engage in a sit-down strike to prevent the shipping of the machinery overseas, or riling up a crowd to resist a forcible eviction in a foreclosure.

There is a big difference between shouting “Kill the Nigger!” as listeners did during some Sarah Palin campaign events in 2008, while she said nothing to dissuade the racist crowd, on the one hand, and, on the other, declaring as I and others have done that those who would cut Medicare and Medicaid funding are condemning thousands of people to death, or writing, as I have also done, that President Obama, like President Bush before him, is a war criminal for ordering the indiscriminate use of drone missile attacks on Afghan and Pakistani housing compounds known to be filled with families, or for refusing to punish those who ordered torture, and that the punishment for such crimes can include execution. 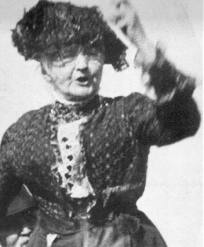 Mother Jones Was Not Civil

In the first instance, a public figure, Sarah Palin, is through her silence, encouraging actual calls for the assassination of a presidential candidate. In the latter instance, facts are simply being stated. No one is being targeted for violent action.

To say that we should have civility in our discourse is a code word in the media and in political debate, for saying that we should not be exposing our leaders as criminals, or calling for their removal from office. Civility is really the death of politics, which thrives on passion and withers with civility.

A war now going into its 10th year does not need civility from a populace that polls show is 63 percent in favor of its termination. An unpopular, illegal and pointless war calls for radical rhetoric and radical action–street protests, blockades of troop transports, destruction of military equipment, disruption of staged patriotic events to support the war–whatever it takes to bring the war to an end. And it calls for language that will encourage such actions.

An attack on Social Security and Medicare, the two key remaining supports of the poor and the elderly in our increasingly Dickensian society, does not call for civil discourse. It calls for rousing speeches that will incite massive marches on Washington, the disruption of the political events featuring those who will not defend those programs, and that call for the removal from office of those who would deliberately turn the nation’s elderly and disabled out on the streets. Those who would cut Social Security and Medicare should be called out for what they are: killers of the disabled and the elderly.

As for this liberal tripe that violent, uncivil rhetoric and action is coming from the left and the right, this is complete nonsense, and when such assertions come from liberal pundits and politicians, it is simply a case of journalistic or political cowardice. Leftists have not called for people to get out their guns. They have not been calling for the execution of candidates. They have not even been calling their political opponents traitors. (Well, okay, I for one have said that the American heads of multinational corporations who lobby Washington on behalf of policies that are gutting the US economy to profit the global operations of their enterprises are “traitors” to the US, but that’s simply stating the truth: they are Americans who are deliberately, if furtively, damaging the national security of their own nation, on behalf of corporate entities that are only, at best, nominally American.) If anything, political rhetoric on the left is far too civil and bloodless.

It needs to be amped up, no down.