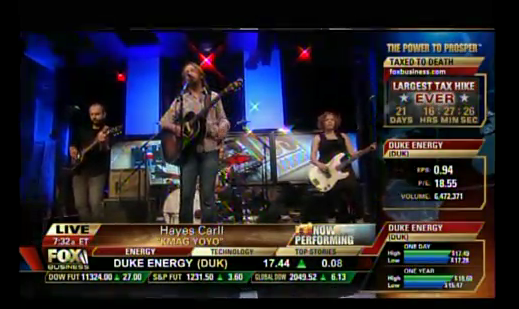 Hayes Carll and band on Fox-TV's "Imus in the Morning"

Hayes Carll is a young country singer from Texas with a fantastic surreal song about an 18-year-old soldier in Afghanistan that is up there with the best of Dylan, with elliptical lyrics like Desolation Row you never get tired of reaching for to figure out.

It’s called KMAG YOYO, which in military argot means “Kiss My Ass Guys. You’re On Your Own.” (This version is the one broadcast on Sirius Radio, because the lyrics are easier to hear. If you want the Fox Imus show performance, which has more of a live feel to it, it’s here.)

Is it Antiwar? No question. But better than that, it’s pro living, breathing life and it really jumps. Check it out!

Instead of being brainwashed by General Caldwell’s PsyOps Team, our Senators should be duct-taped into chairs and made to listen to this song over and over for eight hours.

Here are the lyrics, in case the great instrumental work of the band obscures some of the words:

Well, daddy joined the Air Force
Said, it was a good source
Danger, love, and money, but it
only led to divorce
Ended up in Abilene
Working at a Dairy Queen
Put me in the Army on the
day that I turned seventeen
Here I am standin’ in the
desert with a gun
Thought of going AWOL but I’m
too afraid to run
So I got myself a new plan
Stealin’ from the Taliban
Make a little money turning
poppies into heroin
Sergeant didn’t like it so they
put me in a hole
I said, “It’s easy shootin’ when they
don’t know where to go.”
Threw me on a lily pad
Sent me home to NORAD.
I knew I’d be in trouble but I
didn’t think it be this bad.

Stranger wearin’ all black
Met me on the tarmac
Told him I was sorry but
I ain’t ever going back
He said, you ain’t in trouble son
Learn to fight without a gun
Got a new assignment now, you’re
working for the Pentagon
Gonna take a trip, wouldn’t
tell me what it’s for
Gotta serve your country, gonna
help us win the war
MIT, Ph.D.’s,
night and day, they’re testing me
Ain’t what I was thinking but I’m
being all that I can be
I ain’t no genius but I
knew it wasn’t right
Eating uppers in the morning
and LSD at night
Send me off to deep space
Help ‘em win the arms race
Ola me, oh mighty, but this
shit has got a funny taste.

I think I hear the countdown
Hundred feet above the ground
Told me when I’m leavin’ but
a’nothing ‘bout a’coming down
Sittin’ on a bad dream
Thousand pounds of gasoline
Ain’t leavin’ nothing but some
rubble and my slipstream
Mama always said, I should be
aimin’ for the moon
Never would’ve guessed that I’d be
passin’ by soon
How the hell’d I get here?
Blastin’ through the atmosphere
Drop the rocket boosters and I’m
shiftin’ into high gear.

Bowie on the system and a
bottle on my knee
Armstrong ain’t got nothing on me
Hey ho, here we go
KMAG YOYO
Someone wanna get me, gotta
come up where the sun don’t go.

I think I see a bright light
Something ‘bout it ain’t right
I laid down in a space ship
Woke up in a fire-fight
Trippin’ from the morphine
Came down in a bad scene
God, don’t let me die here,
I ain’t even 19
I won’t ever ask you, Lord for
anything again
I’ll swear it on the Bible,
Torah or Koran
Lyin’ in a rhino track
‘Bout to have a heart attack
IED got to me,
someone call the Medevac
I need some fixin’ after
where it is I’ve been
Never wanna go and try and
shoot a gun again
Slippin’ out the back door
Gonna join the Peace Corps
Tell me, I’m a hero now, so
Someone else can fight this war.