[T]he imperial power that we veterans fought for abroad is the same one some of us are now struggling against at home, and the two couldn’t be more intimately linked. Our struggle is, at least in part, over who gets to define patriotism.

I have nothing against Tammy Duckworth as a person who suffered a permanent disability from an injury as a helicopter pilot in Iraq. I do have a problem with her as a politician using an argument that should be removed from our politicians’ tool boxes. People like New York Times columnist Frank Bruni have locked on her as the perfect liberal patriot/warrior to run with Biden to beat Donald Trump.

So let me be clear, if Joe Biden panders to this “patriot” image and picks Tammy Duckworth, I’m going to vote for the Biden-Duckworth team. Then, when we’re rid of the wanna-be tinpot dictator now parked in the White House, we American progressives can speak out and use our voices to keep the Biden/Duckworth team from selling us all out. Joe Biden, as many know, never met a Republican he would not crawl into bed with if it boosted his political power.  The only way to look at this election is as the incremental beginning of a better, more progressive future. 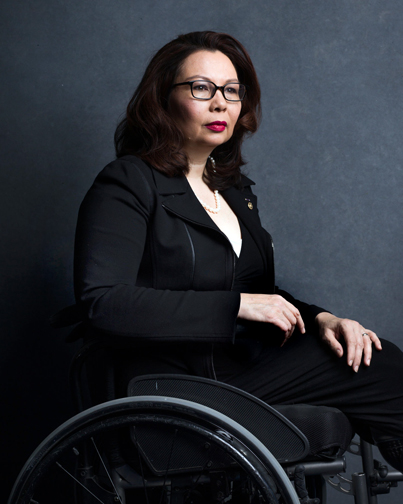 Tammy Duckworth’s July 10 op-ed in The New York Times was in response to ridiculous remarks made by Fox News’ smarmy dolt Tucker Carlson; he didn’t like how she advocated for a “national dialogue” on taking down statues of our founding fathers. I’m with her on this; I recently got flak from the left for writing a piece in which I questioned the knocking down of a bust of Ulysses Grant in San Francisco. My point was that the 1850s was an especially complex time, and Grant did not abuse the slaves owned by his father-in-law — in fact he worked like a dog hand-in-hand with them. He, then, went on to destroy the Confederacy and, after the war, to work for a just Reconstruction.

So, I agree with Duckworth, it’s complicated and we need to discourage the self-indulgent tearing down of statues. Where Duckworth goes wrong and loses me is the argument she uses in her op-ed that she fought in Iraq and lost her legs for my right to speak against my government. She writes: [I]f there’s anything that my ancestors’ service taught me, it’s the importance of protecting our founding values, including every American’s right to speak out.” She drops the argument again in the context of a George Washington statue: “I’ll fight to my last breath to defend every American’s freedom to have his or her own opinion about Washington’s flawed history.” She means George Washington, the man, but that sentence could also be read as focusing on the capital city and “Washington’s flawed history.”

If there’s one thing I learned from my experiences in Vietnam and later as a photographer in El Salvador it is that whatever we soldiers were doing in Vietnam, El Salvador, Iraq and Afghanistan, it wasn’t “to defend every American’s freedom to have his or her own opinion(s).” While I certainly support some of Duckworth’s politics, this idea — I fought in a US imperial war and killed thousands of poor, brown people to protect your right to speak out — is nothing but militarist nonsense. 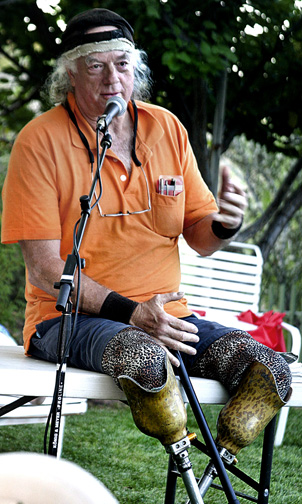 As a Vietnam veteran, to me, this argument is the core “big lie” of US militarism, something I’ve spent much of my adult life opposing. I can’t read Duckworth arguing that I lost my legs for your right to speak out without being reminded of my old friend Brian Willson, a man who literally lost his legs sitting on a railroad track as an act of “speaking out” against a US government weapons train headed to arm the Salvadoran military’s determined efforts to kill and destroy peasants “speaking out” and fighting for a better life. Earlier, Brian had fasted with three other veterans on the Capitol steps, as a means of “speaking out” and exercising their First Amendment rights. Some members of our government, hoping to shut them up, actually accused them of being “terrorists.” When all they were doing was refusing food to make a point about our cruel policies in  Central America. 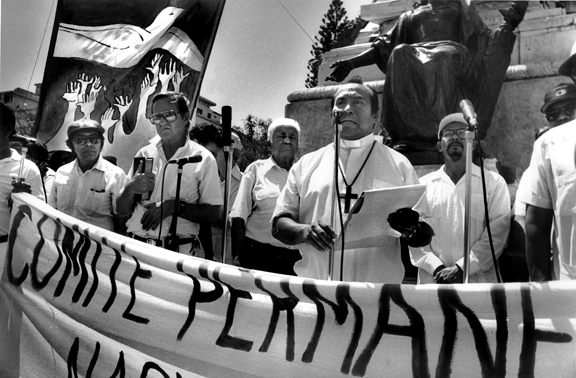 When I was in El Salvador in the mid-1980s, I was invited to a dinner of beer and papusas by Lutheran Archbishop Medardo Gomez. He invited us gringos for one reason, which he explained, something I will never forget. A week or so earlier he had been picked up by a car full of men, death squad types. They blindfolded him and drove him around, beating and humiliating him along the way. This was a half a decade after Catholic Archbishop Oscar Romero had been shot dead while saying mass. Bodies appeared dumped in the streets each morning. Gomez thought this was it — he was going to be killed. But, in the end, they just kicked him out the door with obscenities and threats. Their abuse was, of course, intended to silence him, terrorize him to make him shut up and hide. But he did the exact opposite: He began to speak out and make as much noise as he could to make it as costly as possible to hurt or murder him. We gringos drinking his beer and eating his delicious papusas were instruments in that plan. I have never forgotten this man’s brave logic; I’ve even put it to use at some moments in my life — easy compared to his life in a tiny nation where people had no rights at all.

It’s not the actions of people like Tammy Duckworth, who may have exhibited incredible bravery in Iraq, who protect our rights as US citizens to speak out and oppose the US government. No. It’s people like Brian Willson, people who step outside their comfort zones and actually use those rights in the spirit of use ‘em or lose ‘em. These are the heroes who protect the right to speak out for Americans.

In Vietnam, Willson was a young Air Force officer whose job was to lead a bomb assessment team; and in that role he witnessed the grisly results of the US bombings of Vietnamese villages. This so moved him, he had no choice but to speak out in any way he could — for his own sanity. Do you really know what is being done in your names!? It led Willson to a life of witnessing and protest, a life that inspired me and many others to do the same. It’s people like Brian Willson — and others, some of whom have gone to jail to express those rights — who fight to protect our right to speak out against our government. They protect that right by doing as Medardo Gomez did: They make a lot of noise. Or “good trouble,” as Georgia Congressman John Lewis likes to call it.

If this is a national moment of opening where Truth can slip into the national dialogue, let’s not fall for the old tired bogus argument Senator Duckworth stooped to in response to a stupid right wing attack. I often quote philosophy professor Harry Frankfurt’s opening line from his little book On Bullshit: “One of the most salient features of our culture is that there is so much bullshit.” My purpose is not to pick on Senator Duckworth, whose bravery and suffering I recognize, but to point out she has employed one of our most glaring examples of imperial bullshit — something that has been used in the past to defend way too many disastrous quagmires.

We need to stop letting our politicians get away with it.