ThisCantBeHappening! has just learned that our little news organization was listed, in an alert fired off to all 78 Fusion Centers by Kelly Wilson, Director of the Washington DC Fusion Center’s Regional Threat and Assessment Center, as a potential threat.

The stated role of the Fusion Centers, which were created (and lavishly funded) in the wake of 9-11, was to link federal, state and local law enforcement agencies in order to better detect and combat terrorists inside the US. So what about this threat posed by ThisCantBeHappening!, though? Well, as Threat Assessment Director Wilson explains in her alert, the threat is that TCBH! published an article suggesting that the Fusion Centers played a central role in orchestrating the attacks on Occupy Movement actions in cities all across the US.

As she states in her alert:

Wilson includes in her alert a headline and several key paragraphs from our Nov. 15, 2011 article (which was later proven by us and others to be totally accurate), as well as a link to our entire article on those connections. The selected quotation she chose read as follows:

Police State Tactics: Signs Point to a Coordinated National Program to Try and Unoccupy Wall Street and Other Cities

“…Shortly afterwards, on Oct. 25, [Oakland Mayor Jean] Quan authorized the first brutal police assault on Occupy Oakland. It led, among other things, to the critical wounding of Scott Olsen, an Iraq War veteran who was among the protesters, and was hit in the forehead by a police tear gas canister fired at close range.

“Who organized that critical conference call [among 18 mayors]? Was it Quan or one of the other mayors, or was it someone in the federal government? [Oakland attorney Dan] Siegel says he doesn’t know, and Quan isn’t saying.

“But both Siegel and [National Lawyers Guild Executive Director Heidi] Boghosian say they strongly suspect federal involvement in the planning of the recent spate of police violence against the occupiers. Says Siegel [who resigned in disgust from his post as an advisor to Quan following the brutal OPD assault on Occupy Oakland], ‘It’s only logical to assume that the Fusion Centers are involved, [Wilson’s emphasis] especially after the Oakland occupiers shutdown of the port in Oakland…’” 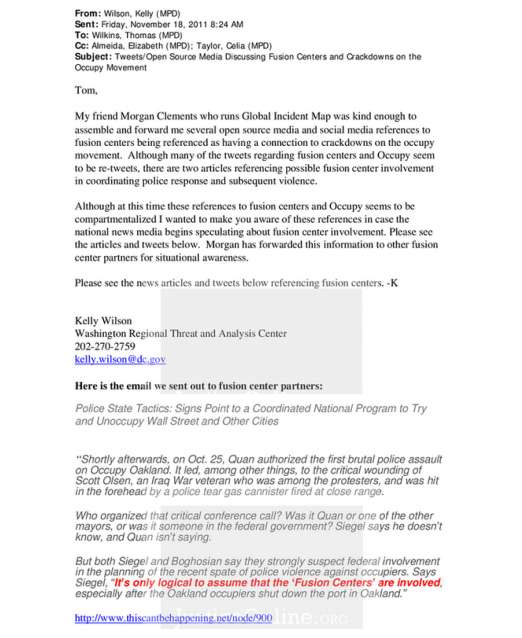 Homeland Security Fusion Center alert sent to all Fusion Centers by DC Office of Threat Assessment concerning ThisCantBeHappening! (click on image to go to original image at the Partnership for Civil Justice, which obtained the memo through the Freedom of Information Act)

We can see then that the exposing of a federal role in the brutal crushing of the peaceful and Constitutionally-protected Occupy Movement nationally, or even suggesting such a thing, in today’s America, is now considered to be a “threat” by the Department of Homeland Security and its Fusion Centers — both organizations that were specifically created not to monitor the media but to root out and “defend” the country from terrorism. The threat in our case is not that we are planning a bombing or some other kind of mayhem. Rather, what alarms the DHS and the “threat assessors” in the Fusion Centers is that ThisCantBeHappening!’s investigative reporting might eventually lead to the news about the Fusion Centers’ role in crushing Occupy breaking out of the “compartmentalized” alternative media and into the national news media, which then might “begin speculating about fusion center involvement.” (It seems self-evident that if the Fusion Centers had not been involved in orchestrating the Occupy crackdown, they wouldn’t have been worried at all about some small alternative news outfit like ours, or even the mainstream media, “speculating” about such a role, ergo this fear of exposure amounts to a full admission that the DHS and its Fusion Centers stand guilty as charged.)

While this document and the mentality it represents are deeply disturbing, ThisCantBeHappening! is at the same time proud to be recognized by the Washington intelligence nexus as posing that kind of threat to the emerging United States police state, of which the DHS and its Fusion Centers are a critical element.

Sadly though, although our article and the November 18 alert citing it sent out by Wilson ran in late 2011, it wasn’t until this month that the New York Times finally wrote about the Fusion Center role, using this and other documents obtained by the Partnership for Civil Justice Fund (PCJ), a Washington-based public interest legal organization focused on federal violations of the First and Fourth Amendments. And even then, the Times buried its story of Fusion Center involvement in the national crackdown on Occupy in its inside pages, rather than playing it where it belonged on the front page. The paper also made light of the Fusion Center effort, focusing on some of its sillier concerns, such as the overwrought government monitoring of an Occupy Movement call for a boycott of the retail industry’s Black Friday sale weekend. 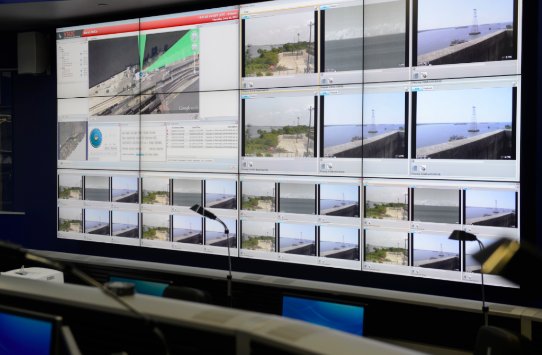 Monitoring Philadelphia (and maybe ThisCantBeHappening?): An inside peek at a surveillance room in the new Delaware Valley Fusion Center, which opened in south Philadelphia last year at a cost of some $20 million

For more information about the mass of documents obtained about the Fusion Centers and their central role in the crackdown on Occupy — which turns out to have been the central activity and preoccupation of the Fusion Centers during late 2011 and early 2012 — listen to the June 5 podcast of this interview by Dave Lindorff of PCJ executive director Maya Verheyden-Hilliard from our radio program, “ThisCantBeHappening!”, which airs every Wednesday at 5 pm Eastern on the Progressive Radio Network (PRN.fm). PCJ obtained thousands of pages documenting the DHS’s and the Fusion Centers’ obsession with Occupy through extensive aggressive use of federal, state and local Freedom of Information inquiries. The results can be found at Partnership for Civil Justice.

A PLEA: Help ThisCantBeHappening! continue to pose a “threat” to the looming police state of America

ThisCantBeHappening! is a collective run by a group of seven professional journalists and writers, none of whom receives a salary. In order for us to do this journalistic important work, we depend, with the exception of a tiny bit of ad revenue, upon donations from our readers. Unfortunately, far too many of you are reading ThisCantBeHappening! without providing that critical support. We ask only that each of our tens of thousands of readers send us at least $5 per year. If you all did that, we’d be able to devote serious time to our work here, rather than having to do it out of our back pockets while trying to make a living doing other things. Please donate whatever you can afford (see the Paypal button at the top of the page, or send us cash or a check made out to Dave Lindorff/TCBH! at POB 846, Ambler, PA 19002.