Williams can utilize an obscure yet occasionally utilized legal procedure to end the injustice involving the world’s most identifiable death row inmate, Mumia Abu-Jamal, who worked as a journalist in Philadelphia before his controversial 1982 murder conviction for killing a policeman.

This legal procedure, known as an Alford Plea, is a win-win situation for Williams and Abu-Jamal.

Williams the prosecutor gets his pound-of-flesh satisfaction of having kept Abu-Jamal in prison since his December 1981 arrest.

Abu-Jamal gains release from a conviction riddled with constitutional rights sabotaging misconduct by police, prosecutors and judges as amply documented by numerous investigators including Amnesty International.

Defendants and inmates in criminal cases from political corruption to murder, including murders of police officers, have utilized Alford Pleas. 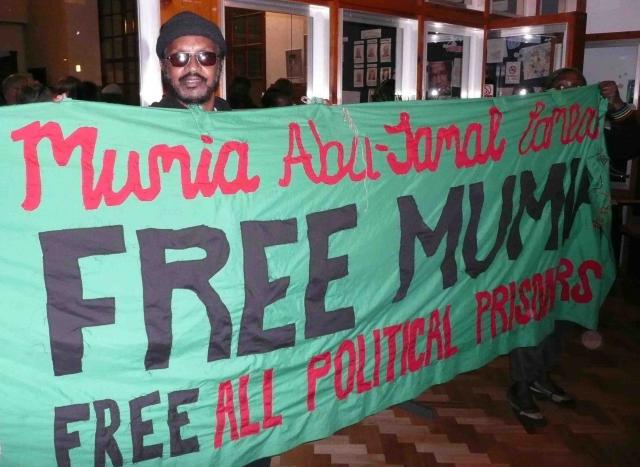 Abu-Jamal supporters at a London event. The Mumia case has damaged the US reputation worldwide (photo by Linn Washington)

Actor Vince Vaughan utilized an Alford Plea in a bar fight case while Sonia Linder Jacobs gained release from a Florida prison in 1992 after serving over 16-years for the shooting deaths of two policemen which evidence cited in court rulings indicates she did not commit.

In August the “West Memphis Three” – three Arkansas men including one on death row – obtained release from nearly twenty years in prison for the murders of three eight-year-old boys through an Alford Plea following DNA tests clearing this trio of involvement in that crime.

A recent by the U.S. Supreme Court in the Abu-Jamal case, declining to hear a Seth Williams challenge of a federal appeals court which for the second time had upheld a federal district court’s 2001 voiding of Abu-Jamal’s death sentence enables the Philadelphia DA to end the expense and acrimony of this case that has spawned books, movies and prompted years of protests around the world.

The argument that Williams cites as the strongest support of Abu-Jamal’s guilt – that courts have consistently upheld his conviction – is actually among the weakest…exposing the grievous flaws in America’s court system.

However, those same courts, evidencing what Amnesty International termed “politicization” in the Abu-Jamal case, illogically claimed no errors exist in the Abu–Jamal conviction–even though many of the very problems with his trial were cited in the overturning of other less prominent defendants.

One of those overturned death sentences involved a man arrested six months before Abu-Jamal in 1981, in a case involving a mob-related murder.

The judge presiding over that man’s wrongful conviction civil case castigated police for framing the defendant, terming his trial a “Kafkaesque nightmare.” That man, framed by two police detectives, ultimately received $1.9-million in compensation from the state for wrongfully having to spend 1,375 days on death row, where he suffered a nervous breakdown and developed ulcers.

Five of the seven members of the Pennsylvania Supreme Court that rejected Abu-Jamal’s second state appeal in 1998 sought and accepted political campaign contributions and other electoral support from Philadelphia’s police union, the Fraternal Order of Police, which it the main group actively lobbying for Abu-Jamal’s execution.

One of those justices was a former Philadelphia DA who refused defense requests to follow judicial ethics requiring him to recuse himself from ruling on Abu-Jamal’s appeal because as DA he had fought against the appeals and because he had accepted police union support throughout his political career, and was once even honored as the FOP’s “Man of the Year.”

Federal courts have also practiced this pattern of ignoring normally recognized evidentiary and procedural errors when it has come to Abu-Jamal’s case, ruling that only one error exists – flaws in the death penalty deliberations at the original trial.

The majority in the Third Circuit Appeals Court which issued the ruling upholding the lower court’s lifting of Abu-Jamal’s death sentence ignored detailed evidence submitted by Abu-Jamal’s attorneys of discrimination by prosecutors in excluding blacks from his trial jury by creating new law.

That malicious ignoring of long-standing precedent sparked a caustic dissent from one Third Circuit judge on the panel – the first-ever such dissent in Abu-Jamal’s decades-long criminal appeals process. The dissenting judge asked his colleagues on the bench why they were ignoring the court’s own record of precedent in refusing to grant “this defendant” the same relief it routinely granted to other petitioners.

Due to the U.S. Supreme Court’s decision, finally settling for good the elimination of Abu-Jamal’s original death sentence, DA Williams must now decide whether to request another sentencing hearing in order to try and get a new jury to resentence Abu-Jamal to death or to instead do nothing, which would means a default life sentence without possibility for parole for Abu-Jamal. It is a decision Williams would have to make in the next 180 days following the Supreme Court’s decision to let the Third Circuit’s ruling stand.

A push by Williams for such a hearing would, as my colleague Dave Lindorff reported earlier, allow Abu-Jamal’s defense to formally document the official misconduct in this case (using evidence prosecutors withheld from the trial jury). Such a hearing could create legal grounds for a new trial.

Yet, Williams deciding against the legal minefield of a sentencing hearing would force Abu-Jamal into another unjust circumstance – spending the rest of his life in prison.

If Williams permits the Abu-Jamal injustice to continue, he breaks his campaign pledge of “A New DA – A New Day” – promising changes to policies and practices that have led Pennsylvania appellate courts to repeatedly cite Philadelphia prosecutors as the worst for willful misconduct statewide.

A circumstance for DA Williams to employ an Alford Plea could come from him not fighting against a defense appeal on the outrageous but consistently downplayed damage done during Abu-Jamal’s pivotal 1995 appeal by then-Pennsylvania Governor Tom Ridge, who later became America’s first Homeland Security Czar.

Ridge issued a death warrant on the eve of that 1995 hearing, a move that enabled biased trial judge Albert Sabo to unnecessarily “expedite” the hearing to Abu-Jamal’s rights-robbing detriment. Abu-Jamal had a legal right to that appeal before any death warrant could be issued. Judge Sabo kept citing the need for “haste” in completing the hearing in time for Abu-Jamal’s execution date as grounds for rushing the defense through questioning of witnesses, and for denying defense requests for subpoenas of needed witnesses, making a farce of his right to a review of the facts of his trial.

A Third Circuit civil lawsuit ruling over a decade ago found illegal fault in that legal mail intercept, criticizing state prison authorities for sending that mail to Ridge’s death warrant office. But that ruling stopped short of the obvious conclusion that Ridge’s death warrant had sand-bagged and undermined Abu-Jamal’s appeal hearing.

DA Williams has an opportunity now, with an Alford Plea arrangement, to restore ethical integrity to his gravely soiled office.

As an 1889 Pennsylvania Supreme Court ruling in a murder case noted, the DA’s Office “seeks justice only, equal and impartial…”