Santa Barbara, CA — What can we learn from the medieval church about biometric identification? Quite a lot it turns out, at least according to Santa Barbara city officials.

Biometrics is the science of human identification based upon an individual’s unique characteristics, which are used to classify them for authorized activities and pursuits. This technique gathers information about the appearance and mannerisms of an individual, using markers like fingerprints, iris scans, facial recognition and gait to determine whether or not the individual will be permitted entry to restricted sites or become the target of surveillance.

Social classification is a function of institutional paradigms in any epoch. In the Middle Ages, the dominant social institution was the church and one of its greatest concerns was identifying those suspected of heresy, witchcraft or demonic possession. Church officials developed several ingenious methods for identifying such individuals. For example, they could examination the suspect’s body for telltale warts, moles, birthmarks and other signs of heresy, or even test them by throwing them into a pond to see whether they would float. Individuals who floated were deemed witches and promptly burned at the stake, while those who sank…well. Many an alleged heretic and witch met their fate at the stake for failing such church biometric standards.

Since at least the 18th century, the dominant social institution involved in such “scientific” stigmatization of individuals based on physical characteristics or behaviors has been the state, and one of its biggest concerns has been the identification of those considered to be predisposed to criminal behavior.

Nineteenth century biometric techniques included the “science” of phrenology, a method of cranial measurement that was believed to map the human head for signs of unusually concentrated brain activity as evinced by the bumps, protrusions, and other outward manifestations of potentially deviant cognitive dispositions. Though later dismissed as psuedoscience, dedicated phrenologists nevertheless played a role in the development of the idea — still widely held — of the innate criminality of certain groups based on the observable traits and mannerisms of their members.

Fast forward to present-day biometric discussions prompted by the national security state and its growing interest in the identification of terrorists — particularly domestic terrorists as defined by the Patriot Act. On that front, Santa Barbara’s city prosecutor Hilary Dozer last month made the case for a gang injunction in the Superior Court of Judge Colleen Stern. His goal is to combat the alleged public nuisance posed by Latino youth in this university city about 100 miles north of Los Angeles. 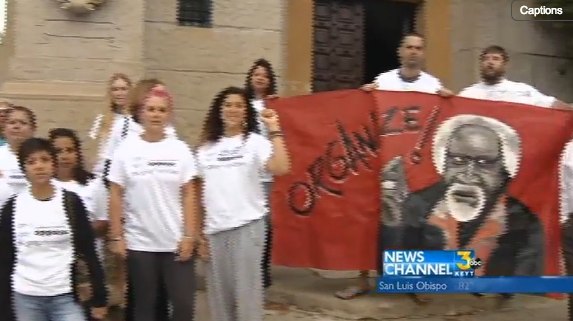 A key basis for the prosecutor’s argument was the testimony of “expert witness” Detective Gary Siegel. The 450 pages of the one and only declaration submitted by the D.A. in support of the city’s case was drafted by the detective. Much like their inquisitor and phrenologist predecessors, Siegel and Dozer seek to define, categorize, and punish a suspect class of people whom they label, collectively, as “gang members.”

According to the biometric standards presented by Siegel, membership in gang culture can be determined by such commonplace behaviors as speaking Spanish and talking on cell phones. The appearance of tattoos — specifically those of Aztec and Mayan origin — and the wearing of “gang clothing,” described as being such things as 805 attire or professional sports clothing — also, signify definitive evidence of gang affiliation according to the prosecutor and the detective.

Other indicators of gang membership according to Dozer include graffiti writing and public intoxication, as well as the use of Spanish-sounding nicknames and/or the making of gestures like the “V” and “W” sign. The DA views graffiti as a particularly strong marker of gangsterism, so a great deal of the prosecution’s argument addressed the alleged coded messages gang members are said to be sending to each other through graffiti. Working like smoke signals on street corners, gang graffiti, according to city officials, indicates the presence of “criminal enterprises” that, taken along with tattoos, clothing, language, and gestures, serve to intimidate local residents.

The problem with biometric identification, though, is that it can easily lead to the dehumanization of people dubbed problematic by authorities based upon its application. When the D.A. and the detective conflate gang culture with Mexican culture, they embark on the inevitable downward spiral toward the demonization of an entire race of people.

What can be learned from the politics of demonization? We need look no further than the recent mass murders committed in Isla Vista a couple of weekends ago. It was Elliot Rodger’s world view demonizing women and minorities as villains, and his belief that women should suffer “divine retribution” for failing to provide him with sex, that led to the tragic murder of six innocent students. His manifesto condemned women and minorities as groups to be feared and hated, and his decision to punish them bore testament to his mad logic.

While claiming to be rational and rigorously scientific through the ages in all its incarnations (however ridiculous), biometric identification permits no room for nuance, ambiguity, complexity or individuality for the people caught up in its classificatory “logic.” It offers absolutely no chance for rebuttal or discussion, and its tragic finale is has been amply displayed through history.

The takeaway from the Elliot Rodger tragedy is that the politics of demonization can be murderous. In making the case for the crypto-racist biometric standards being proposed for identifying gang members that Dozer has argued for, city officials are setting in motion yet again the historical juggernaut that leads to Rodger’s kind of final solution.

Kathy Swift is a PhD student at UCSB and one of the hosts of Radio Occupy Santa Barbara at KCSB. She is an activist and organizer working on Occupy Wall Street issues pertaining to social justice, the environment, and the ending of corporate personhood. She wrote this piece for ThisCantBeHappening! Questions and comments can be sent to scribekat@gmail.com