You might not know it from watching TV news, but FBI statistics show that crime in the U.S.—including violent crime—has been trending steadily downward for years, falling 19% between 1987 and 2011. The job of being a police officer has become safer too, as the number of police killed by gunfire plunged to 33 last year, down 50% from 2012, to its lowest level since, wait for it,1887, a time when the population was 75% lower than it is today.

So why are we seeing an ever increasing militarization of policing across the country?

Given the good news on crime, what are we to make of a report by the Justice Polivcy Institute, a not-for-profit justice reform group, showing that state and local spending on police has soared from $40 billion in 1982 to more than $100 billion in 2012. Adding in federal spending on law enforcement, including the FBI, Alcohol, Tobacco and Firearms, the Drug Enforcement Agency and much of the Homeland Security Department budget, as well as federal grants to state and local law enforcement more than doubles that total. A lot of that money is simply pay and benefits. The federal Bureau of Justice Statistics reports that the ranks of state and local law enforcement personnel alone swelled from 603,000 to 794,000 between 1992 and 2010. That’s about two-thirds as many men and women as the entire active-duty US military.
What these statistics make clear is that policing in America is ramping up even as the crime rate is falling.

For example, SWAT team actions have soared from hundreds annually in the 1970s to thousands a year in the ‘80s to 40,000 a year by 2005, according to a report by the libertarian CATO institute. The author of that report, and academic experts studying the issue, now estimate there may have been as many as 70,000-80,000 such raids in 2013 alone. Hard figures are not available: the Justice Department does not keep records on SWAT-team usage… 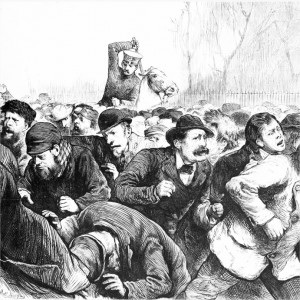 For the rest of this article, please go to WhoWhatWhy News, where it originally appeared.