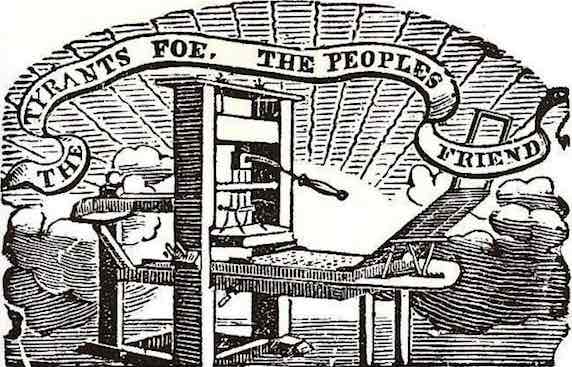 Some 300 newspapers, large and small, joined today in publishing, often on their front pages, editorials defending the First Amendment’s freedom of the press, often making note of their own efforts to combat current threats to that freedom posed by President Trump’s attacks on journalists and the entire Fourth Estate, which Trump routinely denounces in tweets and at rallies as “enemies of the people.”

However, missing from most of these full-throated editorials is any real defense of those who are in the trenches doing the hardest job of a free press, which is exposing the worst offenses of government: the war crimes, the craven systemic corruption of the political system, and the purveying of propaganda and disinformation in the furtherance of anti-democratic policies. (A good example would be the employment by most major news organizations of retired generals and colonels as war commentators without noting their roles on corporate boards of arms merchants that profit form war — a scandal that not one major news organization will expose.)

Nowhere does one read, in these coordinated and seemingly impassioned editorial paeans to press freedom, a condemnation of the five-year torture and pursuit of journalist and Wikileaks founder Julian Assange, who has been holed up in the London embassy of Ecuador, hiding from a secret sealed indictment that since the days of the virulently anti-free-press Obama administration has been sitting in the Attorney General’s office waiting for his capture.

Assange is trapped in the cramped Ecuadoran embassy by a complicit British government that has threatened to arrest him if he exits the building, claiming he is wanted for jumping bail in a court case that was already long-ago mooted by the expiration of Swedish arrest warrant that itself was based upon trumped-up charges of “rape” made against Assange by women who say they had not wanted those charges made in the first place. His real crime, and the thing the US wants to extradite him from Britain for, is publishing leaked Pentagon documents and videotapes proving a policy in the Iraq war of massive and deliberate war crimes.

Although news organizations like the New York Times and Washington Post made the most of those Wikileaks documents, publishing their horrific evidence of war crimes, such as the helicopter gun-ship machine-gun slaughter of a group of innocent Iraqis, including two journalists, shown in graphic detail in a leaked gun-sight video, and profited handsomely from the circulation and attention they derived from those stories, both those papers have slammed Assange, shamelessly questioning his status as a “journalist,” impugning his integrity.

They have ignored the reality that any prosecution of him for the work done by Wikileaks in exposing US war crimes opens the door to prosecutions in the future of other more “traditional” journalists.

These hundreds of supposedly outraged defenders of press freedom are also strangely silent about the federal prosecution of the very leakers who make it possible for them to publish stories about government crimes and abuse. Take for example the 26-year-old NSA contract worker Reality Winner, currently facing sentencing after being convicted of leaking a classified National Security Agency document, still unidentified publicly, with reports saying she may be handed a sentence longer than any prior government leaker. Where are the angry editorials denouncing her arrest, trial and sentencing?

It’s the same thing that happened to Bradley Manning, the courageous young soldier, now known as Chelsea Manning following a sex change operation, who provided Assange and Wikileaks with the undeniable evidence of systemic war crimes by US forces in Iraq. Manning spent 7 years in Leavenworth for her/his heroic act. Little outrage was expended in print by America’s supposed defenders of press freedom over Manning’s uniquely brutal persecution, which included pretrial torture in a Navy brig — only over the crimes that Bradley’s courage and determination brought to public attention.

And let’s not forget that extraordinary whistleblower, Edward Snowden, who leaked an epic amount of NSA documents proving that agency was monitoring virtually all US citizens’ electronic and phone communications (as well as in most other countries, and including their leaders — even in the cas of American alllies) in an ultimate Orwellian nightmare come true. The media loved the ratings and circulation-boosting story Snowden revealed (for no money and at enormous personal risk as some in Congress called for his assassination), but not the whistleblower. The media basically left Snowden twisting in the wind as the Obama administration revoked his passport and made him a stateless person, blocking his transit to countries that offered him asylum and trapping him in a Russian airport transfer lounge. He was eventually granted asylum in Russia, sparing him from having to face treason charges in the US. At that point, though it was the US government that forced him to turn to Russia, the US media took to speculating that he “might” be providing information to Russian intelligence about US capabilities. Nice.

There is also something else missing from the high dudgeon expressed in this spate of page-one editorials lionizing the role of the nation’s corporate news media, and that is any defense of the alternative media. The Washington Post is particularly hypocritical in this regard.

It was, after all, only two years ago that Amazon gezillionaire Jeff Bezos’ private newspaper playground published a page-one McCarthyite hit on over 200 alternative news sites, mostly online, which it said a completely anonymous and unresearched or vetted organization called PropOrNot was alleging were either agents of or “ignorant dupes” of Russia, publishing purportedly pro-Russian propaganda. The paper ultimately published a retraction and apology of sorts for this libelous and scurrilous piece of yellow journalism, but has not come to the defense of those organizations, which include Truthdig, CommonDreams, Counterpunch and numerous other journalistic organizations, including this one, that have long done the kind of real investigative journalism that the corporate media typically avoid: systemic corruption and criminality by the government. The NY Times also ran with this sordid Washington Post “scoop,” as did the Philadelphia Inquirer and others but none of them has ever stood up for the free press rights of the alternative media, preferring to compare their supposedly “higher-standard” articles to those of the unwashed alternative press.

The reality is that a nation either has a free press or it does not. And if journalists from the alternative media can be arrested and jailed with no editorial defense from the mainstream press, as happened repeatedly, for example, during the long Standing Rock native people’s resistance to the controversial XL Pipeline project running through Sioux traditional lands (a struggle that the corporate media studiously ignored until the number of non-indians involved in the protests grew so large, and the violence of police and military forces arrayed against them grew so violent that it could no longer be blacked out and left to the alternative media to cover), then there is no real press freedom of consequence in the US.

A black-out situation that is all too typical of the mainstream media, which is fond of deciding what news is, as the NY Times puts it, “fit to print.”

Just as it is critical to the guarantee of a fair trial that even the most heinous of criminals receive a vigorous qualified defense, it is also critical that all threats to press freedom, even against the smallest and seemingly most inconsequential of news organizations, be collectively challenged and defended against.

So yes, let’s defend what’s left of this country’s supposedly Constitutionally protected Free Press right, but let’s defend all of it, not just the tame corporate version of it.

Because press freedom is under serious attack these days, certainly by President Trump, but also by a corporate media itself that support a censored internet and a two-tiered access to high-speed internet — both of which measures threaten alternative news media — and that fail to firmly back and defend the whistleblowers who often are critically important in bringing urgent stories of government and corporate wrongdoing to light.