As I headed out in my ’94 Volvo to drive from Philadelphia to Washington for the first day of October2011.org, the occupation of Washington, I spotted some trouble: the ABS warning light on my dashboard panel was lit. Stopping at my neighborhood mechanic to get his okay for the drive, I found him busy inflating the tire of a new white Mercedes. As the driver, a well-dressed middle-aged woman, looked on, he asked me what my problem was. I asked if it was safe to drive the car to D.C. with the ABS not working.

After telling me my brakes were fine and I just didn’t have skid prevention, he asked why I was going to the capital. “To cover the first day of the occupation there,” I said.

The woman interjected, “Oh, is that part of those protests against corporate greed?”

As I pulled onto the Interstate and headed for Washington, I thought about her question. Clearly, something huge has just happened. Occupy Wall Street, and the wave of occupations that have spread to over 100 cities across the country, have broken through some invisible wall in American consciousness. If this member of the upper class, or at least upper middle class, with her $50-60,000 car, can casually talk about “corporate greed,” a term that is also starting to appear in the nation’s mainstream media, we are in a new place.

I got the same sense of being in some kind of alternate reality or new world as I joined thousands of people marching through the streets of Washington, first denouncing President Obama at a stop in front of the White House, then briefly blockading the entrance and shutting down the US Chamber of Commerce building just down the street from the White House, and then finally blocking traffic on K Street, the home of the big corporate lobbying offices. Unlike at prior anti-war demonstrations I’ve attended over the past decade in Washington, nobody heckled or cursed us out this time for inconveniencing them at rush hour. Nobody derided our signs or our rousing chant of “Banks got Bailed Out, We Got Sold Out!” In fact, we got cheers, beeping horns, and raised fists and peace signs from passing drivers and people standing along the sidewalks–including men in tailored suits and women in heels. 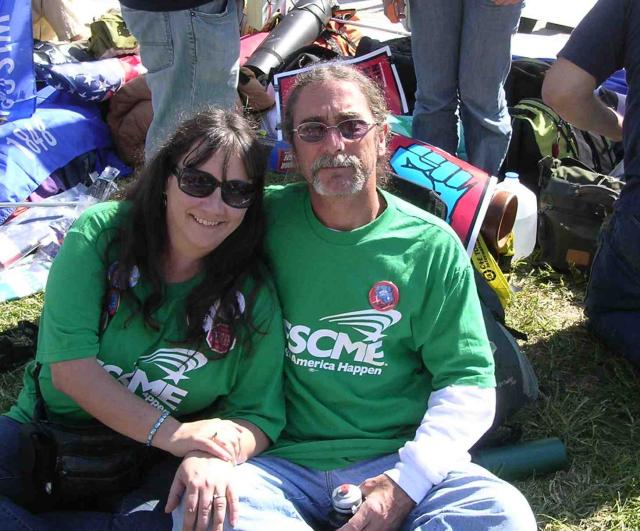 There were some striking differences between the occupations of Washington, DC which began Thursday, and the occupation of Wall Street in New York City, which is into its third week, and which I visited over the weekend. First of all, it’s the amount of gray hair you see in DC.

While the Wall Street occupation in Liberty Plaza is overwhelmingly the work of young people, most of whom haven’t had a 30th birthday yet, Washington’s Freedom Plaza was awash in people who looked like they were veterans of the ‘60s antiwar movement, or even the Civil Rights movement that preceded it. Don’t get me wrong, the young were there too, but they weren’t the dominant age cohort. There were also more people of color in Washington.

The other big difference that was immediately obvious upon arriving at the occupation site several blocks from the White House was the much stronger emphasis in Washington on ending the US wars. Signs calling for an end to the wars and signs linking Wall Street’s crimes with American militarism were prominent everywhere, while they were fairly rare in New York.

Medea Benjamin of Code Pink said in an interview with TCBH! that she thought one reason for the greater emphasis on attacking military spending and US war-mongering at the Washington occupation may have to do with the fact that “this is the 10th anniversary of the start of the Afghan War,” and the fact that the event itself had “originally been planned as an anti-war rally.” But I think there is more to it than that.

For one thing, it is understandable that an occupation of Wall Street would focus directly on condemning the crimes of the companies — primarily banks and investment banks — that have their home offices right there in the world’s main financial center. For another, the young people who are doing the occupying haven’t come out of a history of resisting wars. In fact, for many of them, an America at war has been simply a fact of life through all their years as teens and young adults.

Washington marchers head out to confront the White House, blockade the US Chamber and shout down K Street

But the differences in focus between the two occupations are actually a great thing, born of the amorphous, essentially leaderless or collectively-organized growth of this burgeoning movement. It is inevitable that the various strands of rebellion and grievances will coalesce. It is inevitable that the link between America’s trillion-dollar-a-year imperialist war machine and the collapsing social and economic system will become a central issue, along with the frontal challenge to the current corporate domination of the American political system.

On Sunday, when I was in Liberty Park, I spoke with a burly truck driver from New Jersey named Brendan, who was kind of monitoring access to the media “office” of the occupation. He expressed “disappointment” that New York City’s labor unions had done nothing beyond providing some token support — food and ponchos — to the young people in the square. Three days later, tens of thousands of union rank-and-file members were marching with the young occupiers, calling for an end to corporate crime and political control.

Later, down at the Washington occupation, Jerry and Christine McDonough, two county workers from Madison, Wisconsin who said they planned to sleep on Freedom Plaza as part of the occupation, staying on “as long as we can,” offered another perspective on this movement which also gives some indication of how it has grown. Jerry, a vice president and organizer of his local American Federation of State, County and Municipal Employees (AFSCME) union, said he had been involved “from day one” in the dramatic occupation of the Madison State House last February. “What did that action do?” he asked. “It made everyone in this country see the attack on public workers for what it was: part of a nationwide corporate/Republican plan. Maybe this occupation movement will do the same thing.” He added, “This occupation movement is a direct outgrowth of our occupation in Madison.”

Christine, who’s been laid off of her job since 2008, expressed the fury and exasperation of the nearly one-in-four Americans who have been dumped from their jobs, spitting out angrily, “We’ve been out-sourced, in-sourced and H1-B’ed. Our system doesn’t work anymore!”

Her husband Jerry added, “I called the national office of the AFL-CIO today, to say I was a local AFSCME VP from Wisconsin, and I wanted to know why [AFL-CIA President Richard] Trumka wasn’t here. The office is right her in Washington after all. They said Trumka was ‘out of town.’ So I asked why they haven’t sent someone else over. They said they’d call me back.”

He added, “Uh-Huh. I’m still waiting. What it comes down to is nobody’s going to save us but us!”

And that’s the point. Unlike the Tea Party “movement,” which has been a creation of the Koch brothers and several right-wing organizations, this much bigger occupation movement is not being organized from the top down. It’s an eruption of the pent-up fury of ordinary Americans — young, old, white, black, brown, poor and middle-class, peace activists and recent war veterans — who are finally saying they are sick of having greedy and rapacious corporations controlling, and ruining, their and their childrens’ lives. And they are as mad at the politicians–including the Democrats–as they are at the titans of finance and industry.

As one young Wall Street occupier in military fatigues, a veteran of the Marines from Afghanistan who now works at a $42,000-a-year IT job for a Wall Street bank and is unable to pay down his $120,000 in student debt, put it, “Now I know who my real enemy is.”

A reporter from Tehran state radio called me today and asked what I thought the occupation movement would accomplish. I had to tell her I don’t know. I don’t think anyone could know. Forty-three years ago, back in October 1968, I was an 18-year-old kid sitting in protest on the mall of the Pentagon at the front of a group of several hundred thousand protesters who had stormed across the Pentagon lawn and “occupied” the main entrance to the center of the American war machine. I spent three days in federal jail in Occoquan, VA for that action. If someone had asked me at the time what I thought we’d achieve, I might well have boldly answered, “We’ll end the fucking war!”

And we did, or at least we helped the Vietnamese to do it, but it took seven years. Who knows what this occupation movement will result in, but it’s clear that it has already shattered the political stasis in the United States, and opened up a debate over whether corporations are even compatible with a democratic society.

For the thousands of people joining in these occupations, the answer to that question is a resounding “NO!”