ThisCantBeHappening! has a new radio program of the same name. I’ll be hosting the show every Wednesday at 5 pm Eastern Time on the Progressive Radio Network.

The first program, on the US Social Security system and the effort by the financial industry to destroy it, featured an interview with Theresa Ghilarducci, whom the financial industry has dubbed “the most dangerous woman in America,” for her incisive exposes of their campaign of distortion about Social Security and about the 401(k) plans that they would like us to all have to rely on. That program is not yet available as a podcast.

But the official first show, which aired Wednesday this week, is available at ThisCantBeHappening! on PRN. Check it out. The show is on climate change, and how the government and the energy industry both know climate change is happening, and that it’s happening faster than anyone imagined. I talk about how despite their knowing this, Washington is doing nothing to prevent it, and even worse, the oil industry is both gearing up to profit from a completely ice-free Arctic Ocean by the summer of 2012 by starting ocean drilling in that former ice-bound region, and at the same time is preparing a major propaganda and lobbying campaign to prevent passage of any laws or regulations to limit carbon emissions in the US.

You can hear this program by clicking on the image below: 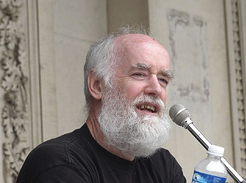 Listen to the new show each week and tell everyone you know about it: ThisCantBeHappening! on PCN.fm ,Wednesdays at 5 Eastern time