On my Yahoo home page today, there was a picture of the globe, and an instant poll asking me to check one of two choices: Yes or No, Do you believe global warming is a real threat?

I don’t usually waste my time on these things, but there was that tantalizing link to “See the results,” and you had to vote to see them, so I voted.

Having recently looked at some depressing satellite images of the pathetically reduced Arctic ice from this past summer, read an account of the rapidly melting glaciers in the Himalayas (sometimes known as the Earth’s third polar region), and read some really frightening articles about the plumes of methane erupting from the Arctic sea floor and the Siberian and North American tundra, I of course voted “yes.”

Who are these “no” voters? What are they watching, reading, or, for god’s sake, what are they seeing when they walk around outside (or maybe they never do that)?

I walked out my door yesterday here in southeastern Pennsylvania, and saw the daffodil shoots poking up two inches above the unfrozen ground in our front garden–something they usually start to do in early March! 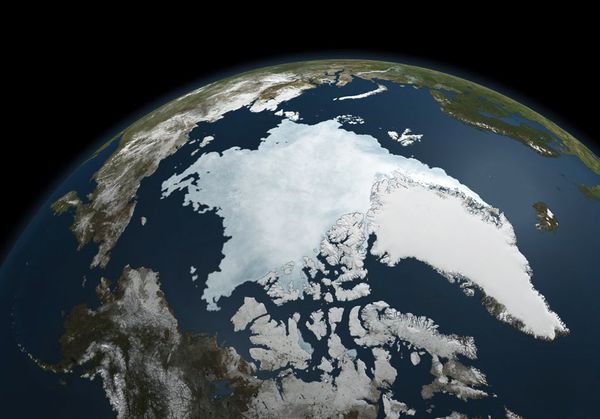 Summer 2011: What's Left of the North Polar ice sheet (note all the actual green around the edge of Greenland, where lately locals say they’re suddenly able to grow tomatoes for the first time)

The grass on our lawn is green! Usually at this time of year, if it’s not covered in snow, it’s all brown, frozen solid by a couple weeks of hard frosts, but this year, the ground has never frozen at all.

Now I know that local climates can vary wildly, but first of all, the word was that the US northeast was actually going to be getting colder in the near term, because the melting polar water was supposedly going to be pushing the Gulf Stream, which has for millennia warmed the eastern coast of North America, out to sea. But this year, because of the record melting of the Arctic sea ice, the Jet Stream has shifted northward, and the whole of the Lower 48 in the US is missing the usual arctic blasts that get pulled down here when the Jet Stream dips southward during the winter months.

A woman at the local coffee shop was remarking to the barrista that she has humming birds wintering over this year! Now that’s really something. Hummingbirds have a metabolism that expends an enormous amount of energy just staying alive. That they could manage to survive through the winter in Philadelphia, at least to mid-January, is nothing short of astounding. It means that the sugar water people put out for them isn’t freezing, and also, more likely, that they are finding insects to eat in sufficient quantity to compensate for a lack of nectar (contrary to popular belief, hummingbirds actually favor insects when they can get them, because of the denser calories available).

But back to that 50% in this Yahoo poll who say global warming is “exaggerated or fabricated.”.

Do they know that the “scientific” deniers of global warming–you know, the ones typically invited onto Fox News, or cited by all of the Republican candidates vying for that party’s presidential nomination–have been generously and cynically funded by oil industry interests, ranging from the Koch Brothers to ExxonMobil? Do they know that that same Exxon/Mobil, while funding efforts to debunk global warming, has been investing heavily in buying up exploratory tracts of the Arctic Ocean in anticipation of the melting away of the ice cap, which would allow them to bring in floating oil rigs there? Talk about playing both sides!

The truth is that with the methane starting to erupt from the permafrost in the far north, as well as from under the shallow parts of the Arctic Ocean, and with the mile-thick ice sheet (at least it was a mile thick a few years ago) over Greenland disappearing far faster than even the most dire predictions of only three years ago imagined, the earth is almost certainly at the point of no return for entering a period not of global warming, or of climate change, but of climate catastrophe. Methane is 20 times as powerful a global warming molecule as carbon, and its release wasn’t even factored into the calculations about the pace of climate change made by the Intergovernmental Panel on Climate Change (IPCC) only a few years ago.

Vast regions of the populated parts of the globe will soon be facing record droughts. This includes Africa, and, once the Himalayan glaciers go, South Asia, Southeast Asia and China, all of which depend for their farming upon the mighty rivers that have historically been fed by those glaciers. Once rivers like the Yellow, the Yangtze, the Mekong, the Ganges and the Indus start drying up, these latter regions will then be the scene of famines the likes of which mankind has never seen.

The US too, will suffer. Check out Lake Mead. That white band around the lake is mineral deposits marking where the water used to be, but now that the Colorado River is drying up, scientists say the lake will never be full again. For a while farmers will draw on the prehistoric aquifer that lies under the nation’s western states east of the Rockies, but that water table is falling rapidly, and is irreplaceable. Eventually, the soil will dry out and just blow away.

These are facts before our eyes, not fabrications, but because the US is, if not a nation of idiots, at least a nation half populated by idiots, nothing is being done about this.

I don’t know how better to put it. It’s not that we are frogs in a pot of water on the stove. That’s the wrong metaphor. We are more like a bunch of people sitting around a campfire on a cool evening, where half the people in the circle are tossing sealed cans of lighter fluid into the blaze to warm things up, because they are too lazy to trouble themselves and go out and scavenge some kindling.

What I find amazing and depressing is that the national religion of “free enterprise” and and the widely hailed supposed virtue of self-enrichment is so ingrained in the American DNA at this point that no one can seem to imagine taking the obvious steps that need to be taken to confront the looming disaster we all face. Clearly the idea of continued “growth” is an impossibility. The world is a finite sphere, with a finite atmosphere and with finite resources. If the number of people on it keeps growing, if they all want to become middle class by today’s standards, and if we Americans keep upping the ante by thinking we need to have more each year, and to do all that we keep strip-mining the planet and pumping ever-increasing amounts of greenhouse gasses into the atmosphere, then the end is completely predictable: we will destroy not just ourselves, but most life on the planet, ending up with something resembling Venus.

You would think that at least some of the leaders of this nation’s corporatocracy would recognize the kamikaze course that they are on as they enrich themselves and their families, but you don’t see any of them quitting and mounting a campaign to stop this madness, the way we’ve seen, for example, at least some generals turn from warriors to campaigners for peace.

You would think that with climate disaster staring us in the face, this election year would see the climate crisis front and center in the campaign debates and news coverage, but no. It doesn’t even come up, except as an applause line by Republican candidates who all at least claim they don’t even believe it’s happening. As for President Obama, he doesn’t even mention the subject anymore, and probably won’t right through Election Day. Instead, all the talk is about whether or not to attack Iran! Talk about missing the point.

I’d say the hell with it, humans are doomed and we’ll get what we all deserve. I’m 62 and I won’t have to face the apocalypse after all. Except that, like most adults, I have kids who will live to face the coming disaster, and if they have kids, it will even be worse for them. So I want action.

What to do? Honestly, I don’t know.

Clearly though if we are to stop this runaway train, it’s going to have to be here in the US. We Americans represent just five percent of the world’s population, but we account for 25 percent global energy use each year and for 28% of all consumer spending–probably 90 percent of that frenzied spending completely pointless. We cannot expect to continue doing that kind of thing if we want people in the rest of the world, and especially the parts of the world where people live in poverty and want, to avoid just copying us and building ever more polluting power plants and buying cars and energy-guzzling appliances like we did.

If we had a survival instinct as a society, we’d be embarking on a crash program to eliminate fossil fuels, and we’d be offering the results of our research free to all comers around the world. We’d also be turning away from a “growth is good” model to something sustainable: a society and economy that provides for the needs of all, that rejects the idea of rich and poor, and that tries in every way to protect and preserve the planet and its environment.

I know, that means a revolution and certainly an end to capitalism, and that is surely what we need. It may take some pitchforks, but in this revolution we’ll have to forget the torches. We can’t risk putting any more carbon into the atmosphere — even if it were the ashes of burning corporate headquarters and corporate pirates.

Saying Government-Funded Healthcare’s Too Costly is Nuts…Unless You Think the US Uniquely Can’t Do It
[caption id="attachment_4823" align="alignnone" width="732"] Fact Check:  This above example of right-wing ad against Medicare for All illustrates the  corrupt propaganda assault now underway. Its fatal flaw? Medicare currently covers the…
All Dave LIndorff's Posts