The smoking ruin that is the the Obama White House, and the rotting corpse that is the Democratic Party, have, incredibly, together been boxed into a corner by, of all things, the certifiably insane Republican Party.

This amazing situation has resulted not through any brilliant strategy on the part of the Republicans, but by the self-inflicted wounds of the Democrats.

Faced with a collapsing economy that is at serious risk of performing a reprise of the Great Depression, Congressional Democrats and President Obama were in a perfect position to grab the flag and run home with it by declaring war on unemployment and on the party that has unequivocally declared itself openly to be the standard bearer of the wealthy and powerful.

All the president and Congressional Democrats had to do was announce that Social Security, Medicare, education and programs to protect the poor were all off limits in any discussion of the federal budget, and to declare an immediate 25% cut in military spending, as called for earlier by Rep. Barney Frank (D-MA), the ranking member of the House Financial Services Committee.

How hard would that have been to do? The polls show it’s what the public wants. Any elected official who did this, particularly someone elected and re-elected as a Democrat, would have been hailed by voters for such a bold action.

According to a Pew Research Center poll conducted in late May and released June 11, 60% of Americans correctly attribute the nation’s enormous deficit primarily to military spending, which eats up 52% of every tax dollar (Social Security and Medicare are entirely funded by separate payroll taxes, and not only have not contributed a single dollar to the federal deficit, but have been routinely borrowed from by the government to finance the deficit in the government’s operating budget caused by military spending). Only 24% blame the deficit on domestic spending other than military (and probably every one of those is a Republican or right-wing independent who likely believes that the earth was created 6000 years ago, and is flat, and who will never vote Democratic no matter what). 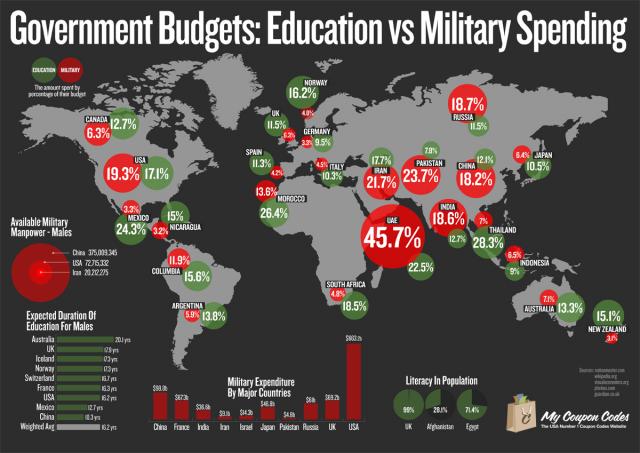 Military vs. Education spending around the globen (US in company of Iran, China, Russia, UAE and India)

That same poll showed that the vast majority of Americans (73%) object to proposals to cut the budget by reducing federal funding for social programs, or federal funding to the states for education, or by reducing Social Security benefits (59%), for example by raising the retirement age.

What the Pew poll finds Americans do support is raising the cap on income subject to the Social Security Tax (FICA), from its current meager level of $106,000, to cover all income (66% in favor). They also favor raising taxes on those households that earn more than $250,000 a year (65% in favor), and they favor getting rid of tax deductions for corporations, which have allowed many wildly profitable companies like Exxon, GE and News Corp to pay no corporate taxes despite earning billions of dollars in profits (62% in favor). They also overwhelmingly favor reducing America’s military operations overseas, where the US currently maintains over 800 bases in countries all over the world, including wealthy allies such as Europe and Japan (62% in favor).

If you were a political advisor in the White House, or in the Democratic Congressional Committee or the Democratic National Committee, one would think that seeing those numbers, the strategy going forward would be obvious: declare the country to be facing New Depression, call the Republican Party out as a bunch of know-nothings, end the wars, bring the troops home, slash military spending, call for higher taxes on the rich, and, in Congress, introduce a public jobs program every day of every week, forcing the Republicans to vote them down, one after another through the next election day.

But the Democratic Party, as I said, is a rotting corpse, and it certainly is not an organization that sees itself as fighting for the common man and woman.

As for the White House political team, and the president himself, they seem to have long since lost their grip on reality.

The president has been hanging around with Wall Street bankers, taking their money and their self-serving ideas, for so long now he actually thinks like them. Congressional Democrats, like their Republican colleagues, are so covetous of corporate campaign cash and lobbyist perks that, with a few exceptions, they can’t imagine crossing any corporate interests.

This is not a case of Democrats being stupid. You’d have to be far worse than stupid not to see the correct political strategy to adopt at this point.

What has happened is that the Democratic Party is no more. It is, at this point, all about current incumbents gaining the favor of the corporate elite, lulling the public into a non-voting torpor or stupor, and of course, arguing that people worried about the nation’s future should vote for them yet again because “the Republicans are worse.”

In a press conference on Friday, President Obama made some incredible statements, all demonstrably untrue. He said “We are all part of the same country,” and yet he surely knows that when it comes to the leaders of America’s biggest corporations, including GE, whose chairman Jeffrey Immelt he appointed to head his Jobs Council, this is demonstrably false. While many of these leaders may be Americans by birth, the companies they run and represent earn the majority of their revenues and profits from operations abroad, and are thus, technically speaking, foreign enterprises, with foreign interests that trump any US interests. Obama said, “We are all in this together,” speaking of the supposed debt “crisis,” but of course, he has announced himself ready to cut Social Security and Medicare and Medicaid programs, upon which poor and working class families depend, while leaving the rich largely unscathed. He has said it is the “will of the people” to cut the budget, but to the extent that that is even true, which is highly debatable, the will of the people is actually to cut military spending, not to cut Social Security or Medicare or even budgets for education or Medicaid.

The good news is that an increasing number of Americans appear to be finally realizing that this president is a fraud–a shill for bankers, the corporate interests and the neo-con military establishment who has just been posing as a man of the people.

The bad news is that there is little likelihood of any Third Party arising before 2012 that could seriously contest the national election, meaning that we are probably headed for either more of the same or a for Republican-led government.

The hope has to be that the blatant sell-out of the public interest and the national interest by both parties and by the president is becoming so self-evident that the American public will actually wake up from its media-induced somnolence and will abandon them both.