It’s a grim sign for the Obama administration that droves of staffers are pulling up stakes and looking for jobs elsewhere, not even having the grace to wait until the mid-term elections are mercifully over. Gone is Christina Romer, chair of the President’s Council of Economic Advisers, going is White House Chief of Staff Rahm Emanuel, gone is communications spokeswoman Linda Douglass, gone is Budget Director Peter Orszag, gone is White House Counsel Gregory Craig. Even the president’s senior political adviser and close confidante, David Axelrod, widely credited with having engineered his primary and election victories, is said to be ready to leave.

Seasoned sailors used to get anxious if they saw a line of rats scurrying down the mooring lines securing a ship to the pier just before it was time to set sail. It was considered an omen of doom. And indeed, the SS Obama, a once mighty vessel hailed as unsinkable at its launch, does appear to be listing badly (to starboard) now, just as it prepares to head back out to sea and face a severe November storm.

The captain of this ship, Barack Obama, has made so many wrong turns (always to starboard) on his maiden voyage that it’s no wonder so many of the crew are looking for other work. Not only that, but Capt. Obama made some really bad choices for chief officers, giving those who labor below decks little reason to feel confident that their leader’s own mistakes in navigation or judgement would be rectified. 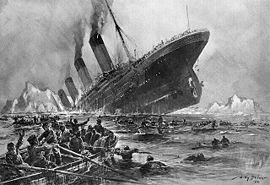 With warmongers like Robert Gates and David Petraeus running the war machine, there was little chance that Obama would get the US out of its two-war quagmire, and indeed, he has done little to extricate the US from Iraq, while doubling down on the hopeless effort in Afghanistan.

With Wall Street sycophant Timothy Geithner at Treasury and Larry Summers, the greedy, over-fed, ego-maniacal misogynist architect of derivative deregulation, as head of his National Economic Council, there was no chance of his seriously tackling bank regulation or the stranglehold over the economy held by a few too-big-to-fail Wall Street mega-banks. Nor was he likely to make a serious effort to tackle joblessness, which afflicts as many as one-in-four or one-in-five American workers.

Little wonder that the big ship’s engine is sputtering, and is barely able to keep the screws turning or the bilge pumps working, raising concerns that if heavy weather strikes, it may not even be possible to keep the vessel headed into the wind, or even afloat for that matter.

Captain Obama himself already ran his presidential vessel into the iceberg of healthcare reform, blinded by the piles of cash his campaign received from the health care industry during the 2008 presidential campaign, and hampered by the heavy list to starboard that the ship had already suffered because of his decision to listen only to officers and crew members standing on that side of the wheelhouse. Healthcare “reform” morphed in to insurance-industry give-away.

It doesn’t help, of course, that the Republican dockworkers have been on strike, refusing to service the ship and leaving it low on fuel and rations. But the president, instead of sending his own crew out to club the rebellious dock workers into submission, has been serving them deserts from the ship’s mess, in a vain attempt at winning them over. He seems not to realize that the dock hands don’t want to be enticed with sweets. They want to take over his ship.

The problem Captain Obama faces now is that with his damaged ship listing badly, with the rats scurrying away down the hawsers, and with severe weather predicted, most passengers who had planned to go aboard for the next excursion are changing their plans and deciding to stay home. Press Secretary and very petty officer Robert Gibbs’ petulant cry that the port-side passengers were expecting too much of the ship’s hospitality is not going to convince many to take the risk of walking up the gangplank for another ride. They’ve already experienced enough sea-sickness, food poisoning and verbal abuse from the crew and are inclined to forfeit their stateroom deposits to avoid another misbegotten voyage.

It might still be possible to sail this leaking tub, but not unless the captain wakes up quickly to the grim urgency of the situation he’s in. First off he’d have to chuck most of his officers over the starboard side, which would immediately help right the ship (especially the loss of the bulky Summers). Then he must replace them with some heavyweights on the port side of the wheelhouse. Most importantly, he needs to figure out a way to lure the port-side passengers back, which he can only hope to do by convincing them that he sees how badly his ship is listing and by showing them that he knows how to turn to port. Converting the $35-billion extended unemployment benefits program into a public jobs program would be a good start, as would ending the wars, slashing the Pentagon budget and putting the saved money into schools, and support for Social Security and Medicare. Sadly, Cap’n Obama shows no sign that he even knows he’s in trouble. Like the captain of the Titanic before him, he’s not even at the helm, preferring to visit daytime TV programs and corporate fund-raising dinners.

So it’s looking like it will be a sad and battered ship that heads out to sea in September to face the electoral storm in early November. At least when she goes down, there should be plenty of lifeboats for those passengers still aboard–unless the remaining crew abandons ship early and steals them all.
_______________________

Now that you’ve read this, check out this animated unemployment map, and see why the good ship Obama is joining the Titanic:
Geography of a Recession