A few years ago, I contacted my local police department asking them to send an officer over to put down a doe that had been hit by a car on the street in front of my house. She had suffered a left front and right rear leg break but had somehow flopped herself well into the yard and was on the ground suffering. When a cop arrived, and began to approach her with his pistol I warned him off, saying the deer would hurt herself more trying to get away.

“Oh,” he replied. “Okay, I’ll get a rifle.” He returned to his SUV, and pulled out, to my astonishment, an AR-4, a military-style assault rifle, which he then used to shoot the deer with a clean shot between the eyes.

When I asked him about having that weapon available in his patrol vehicle, he replied matter-of-factly that all police in almost all departments in the country have them readily available.

Now for the record, I live in a suburban community where the only crimes we have are fights in or outside of bars, and the occasional breaking-and-entering burglary. Yet when a friend of mine whose late brother, a Vietnam veteran with serious PTSD mental issues and drug problems, while visiting his home here, called 911 and said he was going to kill himself with a pistol, my friend came home to find his house blocked off by a swarm of police vehicles, and surrounded by cops armed with assault rifles, and with snipers in position in four spots around the home. Informing the police that he had already removed the bullets and magazine from his brother’s licensed pistol, and that as well his disabled, wheelchair-bound wife was inside that home, he convinced them to allow him to enter the home and bring out his brother out with him, and the incident ended peacefully. 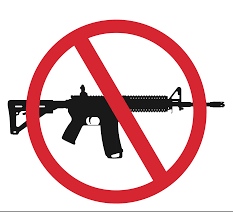 But it demonstrates to me that this country’s police have completely lost any sense that they are supposed to be “peace officers,” as we once called them (when’s the last time you’ve heard that old-fashioned term?).

After the latest bloody slaugher of dozens of people by a whacko with an assault rifle in Orlando, there are the usual calls to ban assault weapons in the US. That makes perfect sense to me. Assault rifles are not appropriate to hunting, unless you are trying to eliminate some species the way we nearly exterminated the Plains Bison in the late 19th century. I’ve heard hunters claim that an assault rifle is “more humane” because it’s rapid fire capability allows the hunter who has wounded some poor animal to finish it off before it runs off to die some miserable death elsewhere in the woods. But that’s absurd logic. If the hunter cares that much about the welfare of his target, he should wait for a cleaner shot. In fact, thinking that way probably encourages more hunters to take wild shots earlier, knowing that they can get off more as needed. The other argument made by gun advocates is that assault weapons are needed by fearful homeowners who want to protect themselves, their families and their property from would be home invaders. But assault weapons are a very poor choice for that job, as they are far more likely to cause what the military calls “collateral damage,” injuring family members while trying to hit any of the invaders.

In any case, it’s clear from the evidence in countries like Australia that have had the sense to ban assault weapons, that when they’re not available the incidence of their use in mass killings drops dramatically — in Australia’s case to zero.

So let’s ban assault weapons in the US.

But what about the cops? It’s worth noting that the Orlando Police admit that some of the dead in the recent Pulse nightclub mass shooting may have been shot by police who fired at Omar Mateen and some of his hostages through the hole that police busted into the outer wall of a lavatory in the building where he had been holed up. I don’t know the details of that shooting spree, but knowing how police tend to all fire at a suspect when given the chance, and that the responding SWAT teams were armed with assault rifles themselves, that they did so with guns that were on at least semi-automatic settings.

Police argue that they need assault rifles as standard issue weapons because the “bad guys” have them and they are thus “outgunned.” But that of course is circular logic. If we allow ready access to assault weapons, of course the “bad guys” or crazies will want to have them too, and so then the police will need them. But if we ban assault weapons, and require any such currently licensed weapons held in private hands to be turned in and destroyed, there won’t be that need.

In most modern civilized nations, even including police states like China, police don’t have assault rifles as standard-issue weapons. They don’t drive around with them racked in their patrol cars. If there is an incident in which criminals are known to have such arms, officers who are trained to use them are issued assault weapons themselves at headquarters, but there is careful management regarding when and how they are used. As a result, you don’t see hundreds of civilians being killed by police in places like Europe, Japan, Hong Kong or Taiwan. As far as that goes, in some countries like the UK, police on patrol are not even armed with guns, which they only turn to when they know they are pursuing or seeking to apprehend someone who is armed with a gun.

Such police are in the business of “talking down” a suspect, not liquidating him or her, and so the whole approach to policing changes because there is not generally the option of just shooting the suspect to end an interaction. As one Scottish police chief explained to visiting US police leaders in an exchange program that was reported last year in the New York Times, “If we have an incident that ends in the arrest of an offender, we consider it a success. If an incident ends with a suspect being shot or killed, we consider it a failure.”

Try to imagine an American police chief saying that. I’ve never heard such a thing. And a lot of the people who are killed by US police officers turn out to have been unarmed, or were armed with something as relatively harmless as a pocket knife.

` So let’s ban assault weapons, but not just for the citizenry, but also for our police. The terms “peace officer” and “assault weapon” simply do not go together. We must, as a society, acknowledge that reality.