Last week, Verizon, the telephone giant, went to court to accuse the Federal Communications Commission of “overstepping its authority” and reverse the authority’s over-step. It’s a legal wrangle that, bottled and distributed, would be a safe substitute for sleeping pills.

Lurking behind the nearly unintelligible and ridiculously referential courtroom arguments, however, is a clear picture of the difference between the corporate vision of the Internet’s future and the way the rest of us want it. At this point, corporations are pouring resources into imposing their vision of the Internet and, if they do, there won’t be an Internet as we know it.

This is the debate around net neutrality, one of those terms everyone’s heard but most of us don’t really completely understand.

In a nutshell, the battle is over the use of “broadband”, the faster Internet service that is the norm in many places in this country and soon will be nationwide. With broadband you can access just about anything that anyone can post on the Internet in close to real-time and its potential for ever-increasing speed makes it the track on which the train of technological innovation travels. Enter the corporations. 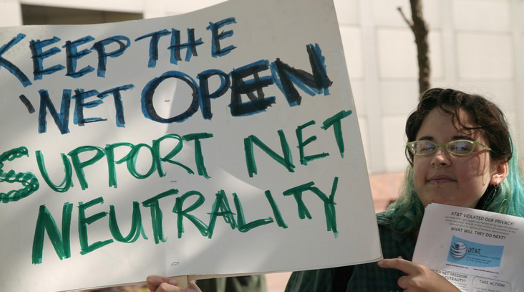 A Pro-Neutrality Demo: The Slogan Says It All

Major telecommunications companies (like Verizon and Comcast) say they should be able to charge you more money for being able to access certain kinds of content through their broadband connections and are pushing for the right to “scale” their systems with different prices for different levels of access. It’s sort of like cable television: you rent the cable hook-up (and pay for it monthly) and the company gives you access to certain channels. If you want to watch the latest movies or sports or other “interest specific” channels, you pay an additional monthly fee for a “package” that includes those channels.

The Internet currently operates differently. You pay for your hook-up and access anything you want. True enough, some websites charge you for content but it’s the website that’s doing that. You may not be able to access the content of a website but you can get to it. That is “net neutrality”; it means everyone has the same level of access on the Internet. It’s “neutral”.

That resistance makes sense. But in the legalese-weighted world of regulation, simple logic doesn’t always prevail. So the argument on “net neutrality” has become mired in a battle over a series of regulations and decisions that confuse more than clarify.

In 2010, the Federal Communications Commission approved an Open Internet Order prohibiting broadband providers from blocking or discriminating against Internet content. In short, it supported “net neutrality”. About a year later, Verizon sued the FCC claiming that the commission had over-stepped its authority because its order treated broadband providers as “common carriers”. That’s the term used to refer to private companies that provide infrastructure: electricity, railroads and — you guessed it — telephone companies. The idea is that these companies provide a basic service people need to carry on reasonably productive lives. As of the 1996 Telecommunications Act, Internet service providers (the people who put you on line) had been treated by the government as “common carriers”.

That argument convinced the Bush-appointed FCC to start treating these companies as “information providers”, a type of company, like cable companies or AOL, that is far less regulated. After that decision, the FCC couldn’t regulate broadband as a “common carrier” industry and so the regulations to protect its neutrality didn’t seem to fit. That was one of the many nightmares the Bush Administration left us with and Barack Obama publicly promised to fix it when he got elected.

Under the Obama presidency, the Commission (under FCC head Julius Genachowski) has really struggled with this issue. When Genachowski proposed reversing the previous edict and making broadband a “common carrier” service, the GOP-controlled Congress practically called for his head. Quickly stepping back, the FCC issued the 2010 ruling that retained the information-provider status of these broadbanders but ruled that the FCC could still impose some regulations that were not normally applied to that category of company. The main one: net neutrality.

And that’s why Verizon went to court. The FCC, Verizon argued, was going way past the acceptable regulations for “information providers”. Again, using the example of your cable tv service, there is no way the government is going to tell Comcast that it has to provide all content for the same price. As an “information provider”, it is legally allowed to scale pricing.

The hearing this week was about that Verizon lawsuit. Although questions from at least two of the three judges indicate that they may be siding with Verizon, the Court will probably not rule until later this year or maybe even next. After that, the ruling can be appealed (and most likely will be no matter what it is) and, during that period of review, the Congress could act decisively (or the FCC could declare broadband a common carrier service) and that would end this case, although it would probably provoke another.

In fact, no matter what happens, any ruling that goes against the companies is going to be litigated for a very long time. That’s because what’s at stake is much more critical than what’s actually being litigated. As is often the case with these legal battles, the dust corporate lawyers kick up clouds the real and important issues in play.

The main question, the one no court can really answer is this: If the Internet is the communications network created by the human race to communicate fully, openly and world-wide, who gave these guys the right to restrict how we use it? Or, expressed more practically, does the fact that someone owns a wire or a satellite system give them the right to restrict what websites you can visit?

The companies’ answer would be that, to ensure innovation and development in technology, we have to make money and we can make a whole lot of it on Broadband usage. That’s a crock because most innovation and development happens–often on the basis of government/taxpayer-funded research — before companies get involved and start investing money (which is usually used mainly for marketing). But few in the media, and no one in the court, is going to confront these giants with these fundamental untruths.

In reality, the companies say soothingly, their main issue is “high capacity” use of their systems: downloading movies or other large files that take up system bandwidth. Why shouldn’t they get a return on the amount of use you make of their system? But, intent aside, that is not what they’re arguing.

Rather they are saying that the fact that they put you and keep you on the Internet gives them the right to decide how you can use it, where you visit, how much email or web browsing you do. That they insist they won’t restrict simple Internet use for most people shouldn’t be an issue because we establish rights to protect us against what powerful companies can do and not against what they say they’re planning to do.

In fact, the corporations’ argument against the FCC’s net neutrality ruling isn’t only about bandwidth use. They are claiming the right to ban or restrict content and are rejecting the idea that the government can impose criteria for what they ban and restrict. The bottom line is that huge corporations, if they get their way, would be able to ban your website from any visitor — the would have that power — and that’s the very power used in countries like China and Iran where Internet use is repressed.

The answer, unless you routinely purchase Brooklyn Bridge shares, is “no”. They can’t be trusted with the power over your right to communicate. They shouldn’t ever be trusted with that power. And the Constitution of this country makes clear that they aren’t trusted.

While the “net neutrality” debate may seem like a jargon-filled conversation between technologists and free speech advocates, it’s really about you and your ability to read what others are writing and write so that others may read it. It’s that important.