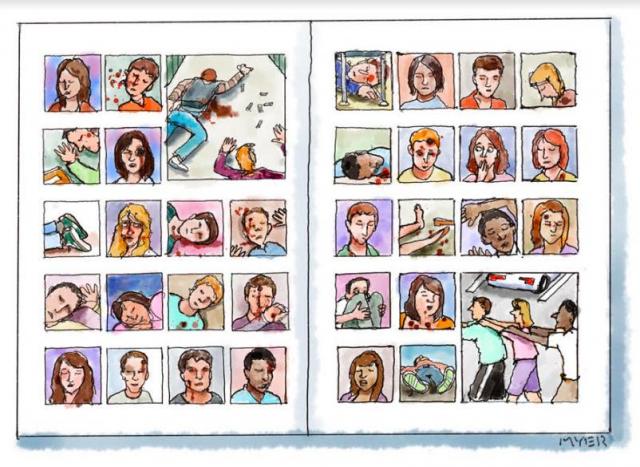 Here we are again. Another massacre in a school, this time in Parkland, Florida. Before we ultimately resign ourselves to this obscene state of affairs, shouldn’t we at least see the actual crime scene photos? It’s an argument made recently in Slate. Don’t we deserve to have all relevant information and visual material as we debate the issue of guns in this country?

It’s unlikely. In the meantime, let’s close our eyes and imagine what the bodies of youngsters in Sandy Hook Elementary torn apart by assault weapon ammunition really look like. Conjure up the slumped figures peppered with slugs in the pews of the Sutherland Springs Church, the dead and wounded littering the campus of Virginia Tech, the concert grounds in Las Vegas, and the hallways and classrooms of Columbine and Stoneman Douglass High School. Think of the thousands of shattered families, whose lives surely will never be the same.

While we’re at it, consider the injured survivors, some of whom will have lifelong disabilities, medical needs, and unalterably changed futures. Go on to contemplate the emotional distress of witnesses and first responders who may be physically unscathed, but will suffer PTSD for months, years, perhaps their entire lifetimes.

Don’t stop there! Think of the millions of American schools students (elementary to high school) who are forced to participate in active shooter drills. They become wonderfully proficient in immediate responses to alarms, barricading doorways, picking up objects to hurl at an armed intruder, where they should assemble after the terror subsides, and how to properly exit their buildings in full view of heavily armed SWAT teams. Sweet dreams, kids!

Almost done. Now bring to mind the 30,000+ who die each year at the wrong end of a gun in far less spectacular ways, through suicide, in gang-related shootings, during marital disputes and drunken rages, or through accidental discharge of a gun. Tally up the astronomical emergency room costs we generate each year as the bodies — dying, dead and wounded — roll in.

Maybe now you have some vague notion of the cost our society pays for our inalienable right to fetishize and acquire millions of guns that give so many the illusion of enhanced power and imaginary safety.

Yep. It’s time to see the photos, which will likely never see the light of day. In the meantime you have my pale rendition as a study aid.

Andy Myer is a cartoonist, writer, and published author/illustrator of three children’s books. His blog can be viewed at www.andymyer.com/blog. He generously offered this essay and drawing to ThisCantBeHappening!