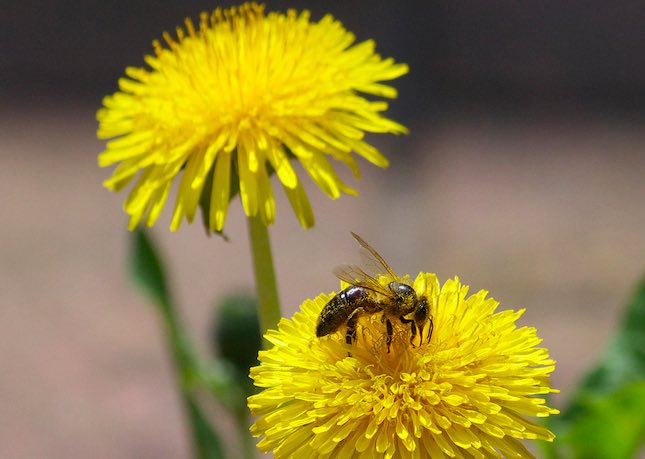 I was talking yesterday with a woman at HealthGuard, a water testing firm we’ve used in the past to test the water in our artesian well for contaminants. We hadn’t done it in five years because the last test showed it to be free of anything nasty, from coliform bacteria to pesticide traces and heavy metals — so pure in fact we could bottle it and sell it.

We decided to test the well again because although we live on 2.3 wooded acres and don’t use chemicals on the property ourselves, we are surrounded by suburban homes that, as evidenced by most of their lawns being totally lacking in dandelions, clearly use gallons glyphosate-laced Roundup.property

I turns out the test we had done before tested for everything but herbicides, so we are testing now for glyphosate too. The woman at HealthGuard said it was becoming a popular test, and that, as I know, the chemical is showing up everywhere.

I don’t know what the test results will be. Our well is 160 feet deep, so we may be lucky. I’m sure that any glyphosate will be minimal compared to what’s in the public water supply in our town, which had to shut down several of its system’s wells because of contamination with PFAs from a now closed Naval air station two miles from us. Fingers crossed.

But the situation with our well and the paucity of dandelions in our neighborhood got me thinking about how crazy our society is.

When I go into a Lowe’s or Home Depot store to buy plumbing or electrical supplies, I’m assaulted as soon as I go in the door by the smell of lawn chemicals. Plastic jugs of Roundup are stacked six feet high right near the entrance of these stores for easy grabbing by shoppers heading for the garden supply area.   At Costco, I found myself in line at the checkout counter behind a man who had a huge bag of grass seed that the label on the bag promised was already treated with “fertilizer and weed killer for a perfect lawn.”  The weed killer, I discovered on checking further, is of course Roundup.

Most of Europe has banned Roundup because of both a determination that is carcinogenic and because its widespread use has been linked to the decimation of the world’s bees, essential for the pollination of some 90 percent of all plants and of 30 percent of food crops, and Monsanto/Bayer has so far lost three major lawsuits levying a total of over $2.4 billion in punitive damages against the company for cancers found caused by their glyphosate herbicide. Yet despite all this, the American public wants its pristine green lawns, unblemished by dandelions and other transgressors like violets, buttercups, clover and wild strawberries.

Mentioning this bizarre attitude to the woman at HealthGuard, she replied, “I know. It’s crazy. People actually tell me they’re stocking up on Roundup because they say, ‘I’m sure the government is going  to ban it eventually, but it really works, so I want to have it to use.’”

This is a bit like the people who insist on buying incandescent light bulbs and stocking up on them for fear they’ll eventually disappear, even as LED lighting keeps getting better and cheaper, and uses a fraction of the electricity required by incandescent light bulbs. In our house, switching to LEDs has reduced our electrical bill by nearly two-thirds, lighting being the main share of our home’s electrical use.

What are Americans thinking?  Are they even thinking at all? (Maybe it will take a lawsuit against companies like Lowe’s and Home Depot to get this vile s**t off the market.)

We just had a report issued by a group of environmental scientists in Australia from the National Centre for Climate Restoration. They predict that if climate change continues on its present track, human civilization (such as it is!) and even humanity itself as a species, will face an “existential risk” as soon as 2050, which is just 31 years from now. The frightening report got major play on the major networks like CBS, ABC and CNN, and in USA Today, but it was basically a one-shot deal. The story came out early this week and by Friday the news cycle had moved on and the dire prediction of mankind’s doom is now history. People are still buying oversized cars, flying hither and yon for vacations, scarfing down beef that is produced on vast tracts of land and from cows that emit huge amounts of the global warming gas methane, commuting to and from work in cars driven by single drivers with no passengers that create massive traffic jams and living in outsized show homes requiring vast inputs of energy. And more incredibly, many are planning to vote in 2020 to re-elect President Trump, whose administration has been actively working to remove whatever minor measures were taken by the Obama administration to moderate US reliance on carbon-based fuels! Or for Democrats whose party leadership won’t even permit a presidential campaign debate on climate change policy!

This is of course all certifiable madness.

When a person lives in an abusive relationship and continues to stay with the abuser, we call it denial — a psychological problem that calls for professional intervention. When a soldier returns from war suffering from nightmares, hearing voices and having thoughts of violence or self-harm, but tries to “tough it out” and ends up killing him or herself, or others, we call it denial, a problem that should have been addressed by psychological experts at the Veterans Administration or elsewhere.

But when a whole nation of people, or half or more of them, hear, or should be hearing, that our whole civilization could collapse within a generation, that billions around the globe could die of climate induced starvation, war and weather disasters, that hundreds of millions, and indeed some entire countries like Bangladesh and Holland, as well as storied cities like New York, Los Angeles, Boston, New Orleans, Miami, London and Shanghai could be engulfed by the sea forcing epic migrations to higher ground, and they just continue to go about their lives as if nothing will happen, it’s not called denial. When our corporate media ignore the biggest story in the history of humankind, or give it only passing attention for a day and then move on to talk about Trump’s latest lie about nobody protesting his visit to London or J. Lo’s latest wardrobe malfunction, it’s not called denial. It’s called normal behavior or “professional journalism.”

This report from Australia — a country that is already facing appalling heat waves as the globe heats up — should be producing screaming headlines on news channels and front pages everywhere. So should reports, also low-balled so far, that the ice sheets in Greenland and in both eastern and western Antarctica are melting far faster than almost anyone imagined earlier, such that a sea-level rise of not three or six feet, but 20 feet or more by 2100, is probable unless drastic changes are made in the burning of fossil fuels. Indeed the reality is most of us who are adults today could witness seas that are 3-6 feet higher by 2050.

Without such honest, responsible, and continuing news reporting Americans, most of whom prefer to get their news homogenized, filtered, sterilized and censored by the likes of Fox News and CNN, or curated and buried by “serious” papers like the New York Times or Washington Post, will just continue doing what they’ve been doing: voting — if they vote — on the basis of diversionary issues like abortion, gay and lesbian rights, terror “threats,” and the latest gaffes by candidates for high political office, all the while running their air-cons set to 60 degrees in summer and their furnaces set to 70 in winter, mindlessly opposing regulations to reduce or eliminate coal and oil as fuels, stockpiling wasteful incandescent lightbulbs and that damned Roundup herbicide, and in the process sending us all — including much of innocent creation — marching to extinction.

The Australian study basically said that in projecting the risks of climate change the global scientific community — especially the official government bodies, national and international — are using the wrong methodology. Given that the worse predictable scenarios are so catastrophic as to defy quantification, up to and including extinction or the collapse of civilization, the proper risk analysis would be to plan for the worst. Most people do this when they insure their home: the chance of total loss of a home is miniscule but that’s what people pay to insure against. Ditto people who buy major medical coverage that has no cap. Yet if they do anything at all when it comes to confronting the risk of climate change most Americans prefer favor timid abatement and regulatory measures and behavior changes that are the risk-assessment equivalent of insuring the garage or covering treatment of a hangnail!

What about the kids and the grandkids, you might well ask. Well, on the evidence, people these days don’t seem to give a rat’s ass about their progeny.

In fact, as I think of it, that is one of the things that happen in stressed environments in the natural world. Birds and mammals faced with a loss of habitat and stressed with the day-to-day and minute-to-minute challenge of surviving are known to often abandon their young, or to stop reproducing. Maybe that is the stage many of us are in now without realizing it. As the mad globalization of the economy and the funneling of all wealth to the tiniest segment of the ultra-rich carries on apace, perhaps the rest of us, struggling just to make the monthly payments for shelter and food, are losing that primal urge so critical to species survival: a drive to raise and protect our young.

If so, and if the rest of the world acts similarly to us Americans, the story of mankind is probably already over.