It is pathetic and even laughable to hear American leaders, and the leaders of the other Western democracies in Europe, cautioning that Egypt’s revolution needs to move slowly, as they call for a “transition” government that would be gently guided to elections by the very man, Omar Suleiman, who for years has headed the dreaded Mukhabarat, the Egyptian secret police, all under the protective umbrella of the Egyptian military.

What is this nonsense?

Did America’s revolutionary government have a slow transition to democracy? Did America’s revolutionaries sign the Declaration of Independence and then hand over the reins of government to a general from the British Army to oversee things as they prepared for elections? No. They immediately set up a democratic system, even in the midst of a bitter war for independence. Did the African National Congress turn to a general from the South African military to run a transition government in South Africa when they finally ousted the Apartheid regime in that country? No, they held an election, and went on to rule as the elected majority. When the People Power revolution in the Philippines toppled the Marcos dictatorship after a generation of autocratic and brutal martial law law, did the people turn to the country’s military and ask it to run the country for a transition year to democracy? No, of course not! They held a snap election and elected the widow, Corazon Aquino, wife of the martyred democracy activist Benigno Aquino. 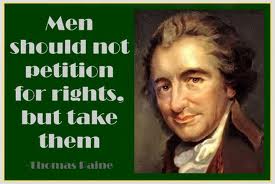 Tom Paine would be in Egypt's Liberation Square

How tragic, sad and outrageous to hear our own political leaders, like Secretary of State Hillary Clinton and President Obama, calling for a period of interim rule–either under the hated dictator Hosni Mubarak himself, or under his hated enforcer, Suleiman. Is this what the young people who have already defended, with their blood, the idea of a truly free, democratic Egypt, were struggling, and even dying, for? Of course not!

How many times have we heard that the vast army of 100 million unemployed, uneducated young people in the Middle East, including Egypt, is a vast “breeding ground” for terrorism, as if these young people were just some species of deadly mosquito larvae. And yet, here these young people are, in Tunisia, in Egypt, in Yemen, in Algeria, in Gaza , in Iraq, and even perhaps in Syria and Saudi Arabia, engaging not in terror, but in peaceful if militant protest to demand what we in the West take for granted: freedom and a voice in their own destiny.

How insulting for us in America–we who cannot even name three or four cities in Egypt, who don’t bother to vote in elections, and who readily equate Arab with terrorist — to imply that these brave protesters “may not be ready” for democracy, adopting the classic fall-back position that colonial, neocolonial and imperialist rulers have turned to for centuries.

Instead of getting in their way, instead of trying to work out behind-the-scenes deals with other would-be tyrants and generals as we help ease out the hated current rulers of these kleptocratic Middle Eastern dictatorships, we should be helping these brave Middle Eastern and North African democracy activists to crush their tyrannical rulers and drive them out of power entirely.

America has fallen a long way from those heady days in the late 18th Century, when that celebrated American revolutionary tribune Tom Paine was declaring that America’s revolution could become the inspiration for a new and better, more humane society around the world. “We have it in our power to begin the world over again. A situation, similar to the present, hath not happened since the days of Noah until now,” he wrote.

Today, our leaders and government actively support tyranny (witness the provision, as part of America’s military aid package to Egypt, of tear gas canisters used against the democracy activists in Liberation Square), urge delay when they find they cannot stop the tide of rebellion, and then exert economic, diplomatic and covert efforts to try to foil or water down efforts to establish a truly democratic government. Even our special envoy, supposedly sent to broker a deal to usher in democracy, former US Egypt ambassador Frank Wisner, turns out to be simply another crook on the take. His lawfirm in Washington, DC, Patton Boggs, is dictator Mubarak’s legal agent in the US. It also represents the interests in the US of the Egyptian military. This creep is our tribune of freedom?

Should the US succeed in its efforts to block these grass-roots rebellions by the young people of the Middle East we should not be surprised if at least some of them, instead of trying to emulate us, turn into our most bitter enemies.

It’s what Tom Paine would have done.

What's in the Massive US Military Aid Package to Ukraine?
This article was written for The Edge, a publication of the Ithaca College Park Center for Independent Media [caption id="attachment_6432" align="alignnone" width="710"] Ukrainian howitzer shells targets in eastern Ukraine (Ukraine…
All Dave LIndorff's Posts