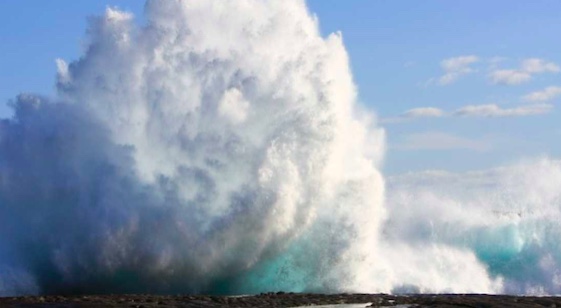 Reports from the Arctic are getting pretty grim.

The latest, from a blog called Arctic News, warns that by 2026 — that’s just nine years from now — warming above the Arctic Circle could be so extreme that a massively disrupted and weakened jet stream could lead to global temperature rises so severe that a massive extinction event, including humans, could result.

This latest blog post, written by Arctic News editor Sam Carana, draws on research by a number of scientists (linked in his article), who report on various feedback loops that will result from a dramatically warmer north polar region, even in winter. But the critical concern, he says, is methane already starting to be released in huge quantities from the shallow sea floor of the continental shelves north of Siberia and North America. That methane, produced by bacteria acting on biological material that sinks to the sea floor, for the most part, is currently lying frozen in a form of ice that is naturally created over millions of years by a mixing of methane and water, called a methane hydrate. Methane hydrate is a type of molecular structure called a clathrate. Clathrates are a kind of cage, in this case made of water ice, which traps another chemical, in this case methane. At normal temperatures, above the freezing temperature of water, these clathrates can only form under high pressures, such as a 500 meters or more under the ocean, and indeed such clathrates can be found under the sea floor even in places like the bottom of the Gulf of Mexico, where the temperature is 8-10 degrees above freezing. But in colder waters, they can exist and remain stable at much shallower levels, such as a in a few hundred feet of water off the coast of Alaska or Siberia.

The concern is that if the Arctic Ocean waters, particularly nearer to shore, were to warm even slightly, as they will do as the ice cap vanishes in summer and becomes much thinner in winter, at some point the clathrates there will suddenly dissolve releasing tens of thousands of gigatons of methane in huge bursts. Already, scientists are reporting that portions of the ocean, as well as shallow lakes in the far north, look as though they are boiling, as released methane bubbles to the surface, sometimes in such concentrations that they can be lit on fire with a match as they surface.

That is scary enough, as a sufficient burst of methane, a global warming gas 86 times more powerful than CO2, could lead to a rapid rise in global temperatures by 3 degrees Celsius or more, enough to actually reverse the carbon cycle, so that plants would end up releasing more carbon into the atmosphere rather than absorbing it.

Is this scenario or a giant methane “burp” from the Arctic sea floor just a scare story?

Not according to many scientists who study the earth’s long history of global warming periods and of evolution and periodic mass extinction events.

As Harold Wanless, a Professor of Geology and a specialist in sea level rise at the University of Miami explains, prior warming periods have often proceeded in dramatic pulses, not smoothly over drawn-out periods.

“We don’t know how this period of warming is going to develop,” he said. “That’s the problem. The warming Arctic Ocean is just ice melting, but the melting permafrost in Siberia, and the methane hydrates under the shallow waters of the continental shelf can happen suddenly. Every model gets the trend, but they don’t give you the rate that it happens or when something sudden happens.”

Wanless, who has for some time been predicting ice melting rates and resulting sea level rises that are far in excess of what the Intergovernmental Panel on Climate Change (IPCC) has been predicting — as much as 10 feet by 2050 and 15 or 20 feet by the end of this century, vs. just three feet for the IPCC — says, “Scientists tend to be pretty conservative. We don’t like to scare people, and we don’t like to step out of our little predictable boxes. But I suspect the situation is going to spin out of hand pretty quickly.” He says, “If you look at the history of warming periods, things can move pretty fast, and when that happens that’s when you get extinction events.”

He adds, “I would not discount the possibility that it could happen in the next ten years.”

Making matters worse, Wanless adds, is the fact that a large enough methane eruption in the arctic, besides contributing to accelerated global warming, could also lead to a significant reduction of the amount of oxygen in the atmosphere (currently about 21%). This is because methane in the atmosphere breaks down fairly quickly, over the course of a decade or so, into water vapor and CO2, but in doing do, it requires oxygen atoms, which it would pull out of the atmosphere. That reduction in oxygen would lead to reduced viability and growth rates of plants and animals, as well as to a significant reduction in crop productivity. This dire trend would be enhanced by a second threat to atmospheric oxygen, which is the oxygen-producing plankton in the ocean. If sea temperatures rise much, and increased acidification of the ocean continues apace as the oceans absorb more CO2, plankton, the earth’s main producers of new oxygen, could shut down that source of new free oxygen.

Methane hydrate as a stable clathrate deep under the sea…but stable for how long?

So there you have it my fellow humans: it’s at least possible that we could be looking at an epic extinction event, caused by ourselves, which could include exterminating our own species, or at least what we call “civilization,” in as little as nine years.

What is particularly galling, in thinking about this, is the prospect that eight of those last years might find us living in a country led by Donald Trump, a climate-change denier who seems hell-bent on promoting measures, like extracting more oil from the Canadian tar sands, the North Dakota Bakkan shale fields and the Arctic sea floor, as well as re-opening coal mines, that will just make such a dystopian future even more likely than it already is.

The only “bright side” to this picture is that it may not matter that much what Trump does, because we’ve already, during the last eight Obama years and the last eight Bush years before that, dithered away so much time that the carbon already in the atmosphere — about 405 ppm — has long since passed the 380 ppm level at which, during the last warming period of the earth, sea levels were 100 feet higher than they are today.

That is to say, we’re already past the point of no return and it’s just the lag being caused by the time it takes for ice sheets to melt and for the huge ocean heat sinks to warm in response to the higher carbon levels in the atmosphere that is saving us from facing this disaster right now.

It needs to be remembered that this scenario is a worst case one. A methane blowout could happen in as little as nine years. But as Prof. Wanless says, we don’t know when it could happen. It might be a century or more hence, and given that possibility, we should not be dispairing but rather embarking on a global crash program to reduce carbon emissions the likes of which humanity has never known or contemplated.

The trouble is, it’s hard to imagine that happening though, particularly here in a country where half the people don’t even think climate change is happening, or if they do notice things getting warmer, think that’s just a peachy thing that will reduce their heating bills.