“Pakistan must do more.”

That statement by Secretary of State Hillary Clinton has become a laugh line in Pakistani drawing rooms.
The 9/11 attacks resulted in 2,996 deaths — 246 on the planes,2606 in towers and on ground, 126 at the Pentagon. The attacks justified an invasion of Afghanistan, the Iraq War and also attacks on the America’s “ally in war on terror,” Pakistan.

The US has come a long way since. The policy of extrajudicial killings survived the Bush/Cheney era and has intensified from an estimated 45 attacks under Bush to 200 under Obama.

Few of those killed in these attacks have been militants. Most have been civilians. Indeed, according to the New American Foundation, only 2% of deaths have been of militants. But hey, that’s ok. That’s why the term “collateral damage” was coined, right?

The Pakistan Army has been engaged in a non-conventional war since 2001, resulting in millions being displaced and in civil amenities being destroyed. Yet there is now increasing pressure from the US on Pakistan to have out army target the region of our own country called North Waziristan.

Pakistan, the US says, needs to “do more.”

In an article carried by the Pakhtoonistan Gazette on 10th April 2011, Muhammad Tahir comments on a White House report claiming that Pakistan has no “clear path” to defeat militants on its soil.

My humble submission, dear readers, is: Neither does the USA.

However, Pakistan needs to “do more.” 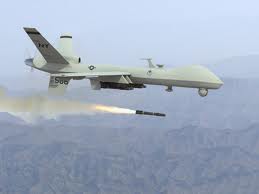 US drone attacks in Pakistan are killing mostly civilians, plus any lingering affection for America

To ensure Pakistan does”do-more”, US lawmakers have demanded tougher scrutiny of the $1.1 billion in counterinsurgency funds provided to Pakistan. Congress required that it have 30 days to review any administration spending plans on Pakistan before 75% of the funds can be released.

Democratic Representative Norman Dicks is hit the bull’s eye when he said that a choice must be made about where to spend the funds: on the American people, or on foreign wars. He said, “I think that is a choice we are all going to have to consider in the days ahead.”

So True! However, America’s “ally in war on terror” has no such right to prioritize the needs of its country!

The Kerry-Lugar Bill passed by the US Senate already stipulates that for the  fiscal years 2011 through 2014, no security-related assistance may be provided to Pakistan in a given fiscal year until the Secretary of State, under the direction of the President, makes the certification required under the bill’s provision, that Pakistan is doing America’s bidding in the “War on Terror.”

Pakistan must “Do more,” or else!

A friend wrote, “Pakistan has been relegated to the level of a ‘tea boy’ working in the street restaurant for it’s master. The tea boy must do to his master’s bidding…or else!”

So in this situation, what must this Pakistani ‘tea boy’ do?

For starters, try developing some dignity and stop being so damned apologetic. After that, strengthen his position in the South West Asia region, by developing trade and other treaties with countries like Sri Lanka, Malaysia, Bangladesh & China. Of course any closeness with China will be frowned upon by the restaurant owner, who may decide to deduct money from the ‘tea boy’s’ pay on some pretext at the end of the month.

That’s a risk worth taking.

And how about if Pakistan look towards Germany for arms sales? Germany is a rising power in the arms trade business. A study by the U.S. Congressional Research office says Germany, with an 8 percent share of the global market, now ranks third behind the United States (41 percent) and Russia (10.5 percent).

One thing Pakistan needs to do pronto: Unless we want to remain the ‘tea boy’ for the rest of this interminable ‘War on Terror,’ stop expecting others to look after our national interests. This is the task of Pakistan herself, not others!

Yes Pakistan must “Do more,” but please, not in someone else’s interest, but in our own!

Yasmeen Ali is a Pakistani attorney who lives in Lahore. She offered this article exclusively to ThisCantBeHappening! She has her own Pakistani blog, PakPotpourri2, and can be reached at yasmeen.a.9@gmail.com