I won’t be voting for Hillary Clinton if she wins the Democratic Party nomination for president, and I won’t heed Bernie Sanders if, as he has vowed to do, he calls on his supporters to “come together” after the convention, should he lose, to support Clinton and prevent Donald Trump or another Republican from becoming president.

Hillary Clinton on her best of days is still a serious menace to both the earth’s continuance as a habitable planet, and to peace. A committed neoliberal who has pursued, both as a senator and as a secretary of state, a policy of economic and military destabilization of sovereign governments, with no regard for the aftermath of such criminality (think Iraq, Afghanistan, Somalia, Venezuela, Libya, Ukraine and Honduras, but especially Libya, Ukraine and Honduras, which were very much her doing in her last public position as secretary of state), Clinton has made it clear even on the campaign trail that she considers Russia to be an enemy. If elected, she has also made it clear she’ll continue a dangerous policy of brinksmanship, pushing for NATO membership of more nations bordering Russia, and moving offensive weapons and troops there too. The stated neoliberal (and neoconservative) goal is to ultimately destabilize Russia so that a) President Putin is removed, and b) so that Russia further fragments into smaller nation-states. This is a mad recipe for World War III, and Clinton, as a new president out to prove her toughness, is a good bet to push things to a point where that war could become a reality.

She would, as president, also continue the long-time US policy of destabilization of elected governments in Latin America, and, in the Middle East, the abject and unqualified support of the virtually fascist government in Israel, as well as of the islamo-fascist arab regimes like Egypt, Saudi Arabia and Kuwait — all of which she supported as a senator, and helped facilitate as Obama’s first secretary of state.

A supporter of fracking and of oil exploration, and even of the coal industry, all of which industries are funding her campaign, she will not take any consequential action to combat global warming that would threaten those industries. If she took the issue seriously, why would so many of the top “bundlers” of PAC contributions to her campaign be lobbyists from the energy industry?

If the rule is, judge a woman by who her friends are, let’s look at Clinton’s friends. So how about this rogue’s gallery: Henry Kissinger, one of the greatest US war criminals of the post-WWII era, arch-neocon Richard Kagan, a co-founder of the notorious Project for a New American Century (the playbook for the Bush/Cheney administration’s invasion of Iraq and demonization of Syria and Iran), and even G.W. Bush VP Dick Cheney, have all praised Clinton and she herself bragged about praise from Kissinger for her work as Secretary of State. 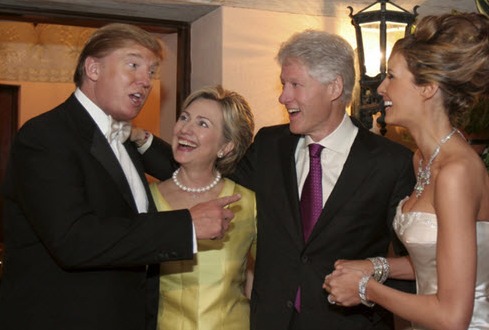 Hillary and Donald, no degree of separation? Deciding who is the worse candidate is a tough call.

Here at home, Hillary is deep in the pocket of the banksters on Wall Street, as Sanders has repeatedly noted on the stump, having taken over $15 million in what amount to bribes from executives in that sector. What earthly good can come of that? (Except to her: much of the money came in the form of “speaking fees” for talks she gave before declaring her candidacy, and so were personal gifts.) Clinton’s also in the pocket of the oil and drug industries, and of the the arms industry.

With friends, or really bosses, like these, the best we could hope for from this wretched politician as president are a few liberal sops like perhaps marginally better enforcement of laws against racial and sex discrimination or unequal pay for women. We won’t even see reform of the police, because Clinton is big on law and order, despite her feigned sympathy for some of the mothers of victims of our militarized police on the campaign trail. The real Clinton sees black victims of police violence as what she has called “superpredators” who have to be “brought to heel,” and she can be expected to continue with policies, like the drug war and like three-strikes-you’re-out sentencing, instituted during husband Bill Clinton’s years in the White House. These are the policies that have destroyed countless families in African American and Latino communities, and that quickly gave the US the world’s biggest prison population — composed mostly of blacks and latinos, and almost entirely of the poor. The evidence of where Clinton’s heart really is: her acceptance of big contributions from the for-profit prison industry that began, and that has grown fat on those very incarceration policies she and Bill have initiated.

Having said this, I am well aware that Trump, that quintessential narcissist money-grubber and (like all successful politicians and business leaders) sociopath, would also not do anything about climate change. But at least he is likely to be more of an isolationist on foreign policy (he has said the US should be friends with Russia, not enemies). He has also not been deferential to Israel, saying he will be “neutral” on Palestine and Israel, and that he will seek “harmony” in the Middle East. Now there’s a refreshing position for anyone running for president to be taking.

Unlike Clinton, a free-trade fanatic, Trump might even dump the disastrous Obama-and-Clinton-negotiated Trans Pacific Partnership (TPP) awaiting congressional approval at this date, and revisit older job-killing trade deals like NAFTA. He’s indicated as much, and his own gambling and entertainment businesses doesn’t depend on such deals.

Is Trump a racist? Who knows? As a New Yorker who spent 12 years watching Trump operate, I would suspect not. But here’s the thing: Trump is basically a TV personality acting in a campaign reality show where he plays a candidate. Would he really deport 11 million immigrants if he were elected president? No of course not. First of all he couldn’t do that as president, and he knows it. Would he wall off Mexico? No, because it would be too expensive, and even most Texans, Arizonans, New Mexicans and Californians wouldn’t actually want one, since too much of their states’ economies depend on cross-border business. Congress and the courts would also have to back such draconian projects. It’s all just talk — a way of getting the low-wattage, fearful and hate-filled white people who are propelling his candidacy to vote for him. In the general election, he’ll have to change his tune in order to win an electoral majority.

Actually, for all the racist and crazy shit Trump has said, he’s also said some good things. Besides proposing a saner foreign policy than Clinton, he has said during this campaign that he favors single-payer Canadian-style health care. In a prior campaign effort back in 1999, he even said he’d favor a 14.5% wealth tax on the assets of anyone worth over $10 million — a fabulous idea that would raise trillions of otherwise useless dollars and painlessly wipe out much of the national debt or fund expanded Social Security, or whatever. Maybe he’d revive that idea. What’s 14.5 % of Trump’s wealth to him, or to any millionaire or billionaire, after all?

My point is, with Hillary Clinton, we know what we’re getting — a corrupt war-mongering, duplicitous neoliberal Wall Street shill posing as a progressive. With Trump, we get a narcissistic businessman posing as a fascist. Neither one as president would actually be what they are pretending to be during the campaign.

I’m the first to admit they’re both unsavory human beings, and I won’t vote for either of them, but as far as those who would say that by not voting for Clinton, I’m helping to elect Trump, my reply is this: I know what Clinton will do as president, and that prospect is so frightening that I cannot in good conscience support her. If Trump were to win, we don’t know what he’d do, but it would probably not be to start another war, and certainly not one against Russia or China. I won’t vote for him, because what he is saying on the stump is reprehensible, but I’d feel better with him in the White House than with Hillary there.

By the way, I have to marvel at the suckers, many of them quite educated, who have been saying they like Sanders, but are voting for Clinton because they think she “knows Washington” and would “be able to work across the aisle and get things done.” Don’t they realize that Hillary Clinton is at least as loathed among Republicans, both among the public and in Congress, as Obama has been? There is no way a Republican Congress, or even a Democratic Senate with a large Republican minority (should we be so lucky as to see control of that chamber pass back to Democrats this fall), will allow Hillary Clinton to pass any legislation remotely important during her term of office.

So for now, I’m all in for Bernie Sanders (my state of Pennsylvania holds its primary on April 26). We’ve got the Democratic Convention here in Philadelphia too, so I plan to be inside as a reporter, and outside on the street, if there is any contest still at that point. But when it’s all over, if the Democrats nominate Hillary Clinton, I’m voting Green for Jill Stein’s candidacy in the general election. Hopefully Bernie Sanders, after having pointed out Hillary’s corrupt financing and having been the victim of her campaign of lies, backed by a corrupt corporate media, will rethink his plan to endorse her. But if he does endorse her, I, and I suspect a large segment of his backers, will ignore him.

Clinton is not the lesser of two evils. She is demonstrably worse than Trump in some crucial ways. 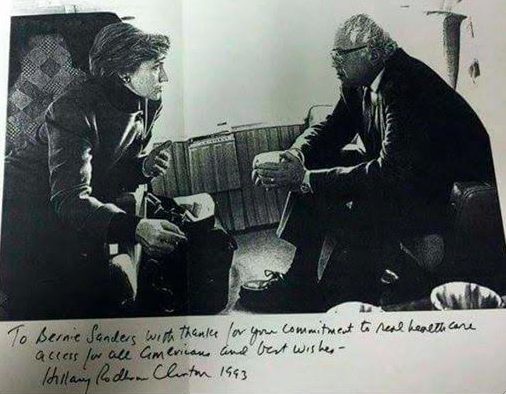 When it comes to shabby campaign lies, Hillary took the cake when she asked, ‘Where was Bernie when I was trying to get healthcare in ’93 and ’94?’ The answer: He was one of her main backers! And she knew that as this thank you card shows.