This week, the government began their assault against private Bradley Manning. Even though he has already plead guilty to misusing classified documents and faces twenty years in prison, prosecutors want him branded as having aided the enemy, with a life sentence to go along.

The government is incensed that this lowly private would take his oath to protect and preserve the Constitution seriously enough to expose illegal and unconstitutional acts by our government. They are furious that Manning’s leaks gave the world video proof of some of the American military’s war crimes. They want vengeance because the callous, supercilious, erroneous and ignorant acts by government officials in dealing with international affairs have been revealed to all through the leaked cables. They are embarrassed that they have been exposed as the lying liars that the public generally assumes them to be. They are mortified that some citizen or news organization will draw peoples’ attention to the fact that the government is over-classifying documents at conspiratorial levels.

So, reminiscent of the best of Stalin or Kafka, they have put Bradley Manning “on trial” for his crimes. They will rely on secret evidence to make their case. They will not give Manning’s defense full access to this evidence. And they will prevent him from being able to shine the spotlight on what should really be on trial here: the illegal and immoral actions of the United States government and military. Even Fulgencio Batista, the military dictator of Cuba, allowed Fidel Castro to speak in his own defense without censoring him while he was being tried for an armed assault on a Cuban military installation. Of course, Batista would soon be driven from power by Castro, and the oligarchy that runs America doesn’t want to make the same mistake. So they will stack the deck against Manning, bring the media on board with tantalizing but vague claims of national security threats and then concoct some sort of narrative that casts the Private as a troubled, unstable soul, or perhaps a misguided and vindictive one that will explain away the why of the crime and the erase the significance of anything unearthed in the leaked documents.

Let’s take a moment to consider some of the conduct of our most recent leaders and the outcomes of that conduct. Lyndon Johnson lied about a naval incident in the Gulf of Tonkin in order to initiate combat in Vietnam. Nixon lied to the American people about a secret plan to end the war while he was actually using intermediaries to delay peace talks to help his election chances. More than one million Vietnamese and 58,209 Americans perished in that senseless war. America’s prestige was exposed as a fraud and we are still exacting a price from homeless veterans, Agent Orange survivors and PTSD victims, not to mention the decades it has taken in restoration efforts in Vietnam, Cambodia and Laos. 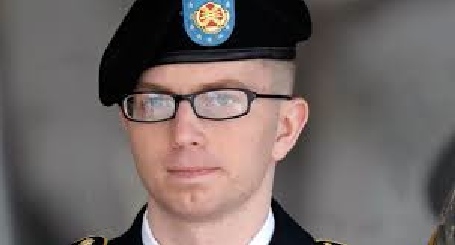 Pvt. Bradley Manning, a hero betrayed by his own commander in chief

Ronald Reagan lied about selling arms to Iran in exchange for freeing hostages. He also lied about the terrorist assault that America was sponsoring against the democratically elected government of Nicaragua through our proxy army of contras, funded with the profits from the illegal arms sales. Those and other policies in latin America contributed to the extermination of over a million peasant, farmers and indigenous people in the region.

George W. Bush and Dick Cheney, in the face of contradictory evidence, lied about weapons of mass destruction to get us into war in Iraq. Secretary of State Colin Powell substantiated the lie. The military ignored the lie and got down to the dirty work of committing war crimes and devastating a civilian population. The results: hundreds of thousands dead, a corrupt government is slowly turning back into a dictatorship, sectarian strife is rampant, mercenary American corporations have made billions and America is even hated more fiercely than it was prior to the start of our unprovoked attack. Now muslims worldwide accuse the U.S. of conducting a religious crusade in an attempt to destroy Islam. It’s not too hard to understand why they’ve drawn that conclusion.

Obama lied to us just last week when he assured us that his administration only murders bad guys when they can’t be caught first.

The betrayal here is twofold, but none of it is from Bradley Manning’s decision to share these documents with the world. The first betrayal is that of our nation’s leaders failure to live up to the letter and the spirit of our Constitution and our laws. They have instead acted as out of touch tyrants, confusing their personal views with the truth and recklessly violating constitutional rights with abandon. Their actions time and again lead to gross injustices, murder and mayhem, corporate profiteering and greater suffering among the general populace as a result. Manning’s action was taken in order to sustain his oath to the Constitution. The soldiers who ignored these war crimes in their units are the ones who have betrayed us. The officers who overlooked these crimes, or, worse, encourage them are betraying our nation and our notion of everything that is right and moral. The politicians who serve themselves to the last bits of swag while the the constitutional construct that has defined us succumbs to corporate/commercial control, these are the true traitors to our nation.

And we the people cannot escape this charge as well. Those of us who have allowed Bradley Manning to twist in the wind without taking even a moment to learn what is was that he exposed, those of us who, when we do learn of the atrocious actions of our government, simply shrug our shoulders and change the channel, we are also betraying our nation, our duty as citizens and the honor of Private Manning’s action.

Even if we consider topics outside the scope of this “trial”, we can see that we betray our nation’s principles or Constitution almost daily. When we allow the media to tell us get excited about the recent housing market uptick, without learning or caring that the reason for this is only because speculators – hedge funds, investment companies and real estate corporations – are starting to buy up houses thinking to turn them over for a profit in the near future which only exacerbates the housing market, then we are betraying the American principle of thinking freely for ourselves and of equal opportunity for all. Every time we allow a corporation to tell us that they are going to take our land so that they can spill tar sands oil on it, or that they can raze your neighborhood in order to attract wealthier people to that neighborhood, then you have betrayed the very notion that you are a free American as advertised so convincingly on TV. Every time that you allow yourself to be defined by a “brand” be it an automobile, a pair of jeans or a brand of beer, you have betrayed the mythic concept of American individualism.

Contrary to government rumors, Bradley Manning is one of the few among us who decided not to betray his country. He is one of the few who decided to take fateful action, knowing that is was the right thing, the only thing that he could do, especially as a service member under oath to defend the Constitution.

We can follow his example. We can say “no mas” when it comes to putting up with assaults on our privacy, our health and our environment. We can throw a cog into the wheels of crooked commerce whenever we encounter it. We can withdraw our money and our business from any institution that does not meet our standards of conduct. We can be as bold as Bradley, and his work will not have been in vain.

Let’s show our colors next week by celebrating “Fly Somebody Else’s Flag Day” on June 14. Maybe when we the criminals stop prosecuting the defenders of the nation, we could more appropriately think about fly our own.

DAN DeWALT is an activist and journalist based in New Fane, VT. He wrote this article exclusively for ThisCantBeHappening! He can be reached at PatriotResponse@yahoo.com