The Nobel Peace Laureate President Barack Obama, the guy who once campaigned claiming one US war — the one against Iraq — was a “bad” one, and the other — against Afghanistan — was a “good” one, turns out to be a man who, once anointed commander-in-chief, can’t seem to find a war he doesn’t consider to be a “good” idea.

Obama turned out, on taking office, to have a hard time saying good-bye to the occupation of Iraq, only leaving when he was forced out by an Iraqi government that refused to continue giving US forces legal immunity for killing Iraqi civilians. In Afghanistan, he decided to copy the same “surge” — a massive increase in targeted assassinations and violence — that he had once condemned in Iraq. Then he stepped up drone-launched rocket attacks and bombings in seven other countries.

More recently he has begun an air war against Syria (okay, he says it’s against the so-called Islamic State, but the whole world, with the exception of a lot of ill-informed US citizens, knows it’s ultimately against the Syrian government), and now his Secretary of Defense (sic) Ashton Carter and his Secretary of State John Kerry are pushing for sending heavy arms and, inevitably, US “advisors” to Ukraine to escalate US involvement in the civil war there. What makes that latest war particularly dangerous is that all the while, Peace Laureate Obama makes it clear that the “enemy” is Russian President Vladimir Putin and the Russian military.

Never mind that it is the US that originally orchestrated and encouraged the fascist coup that overthrew the elected government of Ukraine, setting in motion a huge pogrom against ethnic Russians in the east of that country and provoking the current armed conflict, and never mind that Russian concern about the Ukraine stems from a decades long history of the US pushing NATO ever closer to Russia’s western border, with Ukraine kind of the last straw.

Anyone looking objectively at the warmaking and war-promotion of this administration would have to conclude that President Obama is one of the most bellicose Chief Executives in the history of the United States. 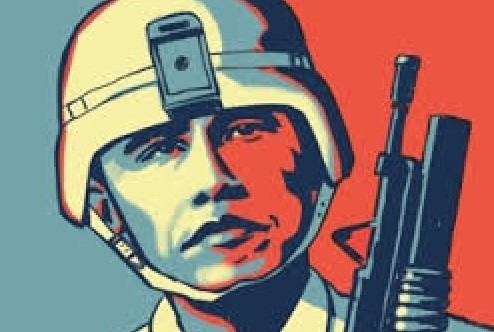 If you don’t believe me, just look at the US military budget President Obama has proposed for FY2016. At $585.3 billion, it would if approved by Congress represent an increase in spending of $24.9 billion, or about 4%, over the 2015 budget, and that is despite a decline in what, since the Bush/Cheney years, has euphemistically been called Overseas Contingency Operations spending, or spending on actual wars. The proposed OCO budget for 2016 in this “peace” president’s budget is “just” $50.9 billion, down about $13.3 billion from 2015 thanks to what the president, in one whopper offered during his State of the Union address, called the “end of combat” in Afghanistan (that war is actually continuing, with some 12,000 US troops expected to remain stationed in that country indefinitely).

The thing about OCO funding is that it is really not predictive of anything. It could soar way beyond that $50.9-billion level, for example, in a flash if the US follows through and escalates the war in Ukraine — especially if Russian troops are drawn directly into that conflict and the US responds by upping its own involvement.

In fact, the OCO part of the budget has been used by the Pentagon and the administration over the last few years to get around the constraints of an ongoing Congressional “sequestration” requirement that cuts so-called discretionary spending, both military and non-military. Congress, ever mindful and solicitous of the country’s imperial ambitions, provided an exemption for ongoing military conflicts, and the Pentagon has since been deceptively slipping all kinds of other spending under the OCO heading now ever since the loophole was created.

But the Obama administration’s warmongering stance, in terms of the budget, isn’t told just by looking at the official Pentagon budget. There is much more spending that is really all about war. Not included in that $585.3 billion figure is $70.2 billion in discretionary spending for Veterans Affairs (that’s in addition to $90 billion in mandated spending). This is money to pay for the damages of the nation’s warmaking — the injured or ailing veterans who served or are now serving in the nation’s armed forces. Then there’s the intelligence agencies’ budgets — the CIA, the NSA, the FBI, the DIA, the DEA, the ATF and Homeland Security, etc. — most of which is really part of part of the war machine, thanks to the so-called “War on Terror,” which has re-defined the US itself as part of a global war zone. While much of that intelligence budget is concealed from the public on the spurious grounds of “national security,” it is known to exceed $100 billion a year. Add to that the $24-billion share of the Department of Energy budget that is weapons and war related, and you have a real military budget for 2016 of $707 billion. That’s out of a $1.2 trillion total discretionary spending budget (the rest of the $4 trillion proposed 2016 budget is called mandatory because it is debt repayment or spending on mandated things like Social Security and Medicare, which are funded by dedicated payroll taxes, not income taxes and other federal taxes, and which are promised to recipients like retirees and the sick.

What this means is that when you look closely, some 59% of the entire discretionary budget of the federal government – things that are funded each year by money that Congress has to appropriate — is being spent on the military. Given that the total amount of taxes collected by the federal government (income, corporate profits, exist, inheritance, etc.) also comes in at about $1.2 trillion, we’re saying that taxpayers this coming year will be pouring not just $707 billion, but 59 cents of every tax dollar in to war, planning for war, or paying for war. But it’s actually worse than that because actually the US government operates at a deficit, and doesn’t ever finance its wars on a pay-as-you-go basis. Instead, it borrows the money and then pays interest on that debt. Every year that interest comes to about $240 billion, and roughly half that is for borrowing to pay for past wars and past and current military spending. So add $120 billion to the $707 total and it become $827 billion.

In other words, it’s really 68.9% of every tax dollar you pay this April 15 that’s going to pay for America’s wars and its obsession with militarism.

No wonder our schools and universities, our parks, our roads, our once-vaunted global scientific leadership, our environment, our health and safety, our family budgets and even our life expectancy, have been going to hell! The only thing that’s really getting funded in this country is war.

By the way, the reason you may not have realized how much you are paying for war out of your taxes is that the government, and the corporate media, carefully avoid letting you know. They do this by sleight of hand. You see, they never really break out just the “discretionary” budget, or point out the parts of the budget that are outside the Pentagon but that are still really military-related, like spending on nuclear weapons and weapons development, nuclear research and cleanup, decommissioning of nuclear processing plants, and of course veterans affairs and benefits. They also do it by lumping the huge outlays for Social Security benefits and Medicare into the overall spending budget, though actually those benefits are funded not by income taxes but by a Trust fund of some $1.7 trillion that was created over the years by specially-dedicated payroll taxes separately paid by workers and their employers over the working life of each person. Adding those items into the national budget, while leaving out things like spending on veterans, nukes and war debt, appears to reduce military spending to a much less troubling 6.8% of the budget.

But it’s a fraud.

If we want to revitalize the US, the only way to do it is to end militarism and war, and to generously fund human needs.

To do that, we need a real peace president and a peace congress, not the Nobel Laureate warmonger we have now in the White House, and the bi-partisan war chorus we have in the Congress.