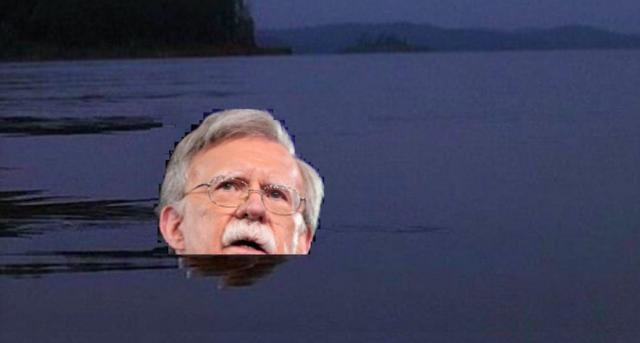 John Bolton as Trump National Security Advisor: Back from the dead along with Neoconservatism

John Bolton, the man named this past week by President Trump to be his new national security advisor, is like that hand from a bloated, rotting corpse of the torturing rapist local yokel that erupts from the water at the very end of the movie “Deliverance,” returning to remind its former victims of the horrors they had endured earlier and thought they’d finally rid themselves of.

One of the most bloodthirsty members of a gang of war-mongering neo-conservatives (almost all, like him, having no military experience themselves), who ran foreign policy and launched wars of aggression during the Bush/Cheney administration, Bolton is a man who for years has been pushing for an imperial US policy to combat domestic economic decline. According this numbskull notion, Washington should attempt to maintain US primacy in the world affairs through force of arms, picking fights, starting wars, overthrowing governments a playing existentially risky games of chicken with nuclear powers like Russia and China. He and the wacko ideology known as neoconservatism, have returned with Bolton as a National Security Advisor, in this case to advise a president who thinks nuclear weapons are meant to be used.

Now I’m not one who thinks that military experience should be seen as some kind of prerequisite, much less a positive attribute, for appointment to a top federal post, even when that post has to do with military affairs or foreign affairs. Certainly a well-educated and thoughtful person, male or female, with no military experience, could do a better job running the Pentagon, the State Department — or the National Security Council — than a host of veterans of those posts who boasted rows of medals and colorful honors on the uniforms they either wore or kept as souvenirs in their closets.

That said, when someone like Bolton, who is a fanatic warmonger, has repeatedly advocated “pre-emptive” war as the go-to option for dealing with an international dispute, and is ready at the slightest assertion of independence on the part of any foreign power to call for bombing and for sending tens or hundreds of thousands of US troops into harm’s and harming’s way, I would insist that such a person, before being placed in a position of significant power and influence in the US government have had, as a bare minimum, at least some actual experience with combat. Instead we have an apparently perfectly healthy 69-year-old nut-job who turned 18 in 1967, right at the height of the US war against Vietnam, but who, despite being an ardent supporter of that war, used student deferments and who knows what other slippery excuses to avoid fighting in it, now being made Trump’s latest top advisor on issues of war and peace.

We’ve seen over the past two or three decades how disastrous it can be when administrations headed by or filled at the top with policy-makers who are so-called “chicken hawks” — people who advocate for war as a solution to diplomatic issues but who have never worn a uniform or who, even if they have spent a little time in a branch of the military, have never faced or even fired a bullet in anger or watched comrades die in battle. President Reagan, whose only war “experience” was as an actor, sicced the US military on two tiny nations — Grenada and Panama — with deadly consequences for local civilians, President Clinton, who dodged the draft during the Vietnam War, happily waged a brutal and one-sided air-“war” against Serbia. George Bush , who hid out from the Vietnam War he supposedly supported politically by signing up for the Texas Air National Guard, carefully checking a box in his enlistment papers saying he did not want to be available for foreign assignment, as commander-in-chief launched two wars against Afghanistan and Iraq, both of which conflicts are still raging almost 20 years later, with as many as 1 million mostly civilian deaths and multiples of that number displaced. Barack Obama, who never wore a uniform, launched a disastrous and bloody war against Libya which led to the overthrow and murder of that country’s leader and left the country in a state of murderous chaos from which it has yet to emerge, launched and ran a murder campaign by drone that killed mostly innocent civilians including kids, and ordered a $1-trillion “modernization” of America’s nuclear arsenal, including the development of small “usable” nuclear bombs.

Now we have President Trump, who famously ducked the draft during the Vietnam War.by claiming to have “bone spurs” (surely the shabbiest excuse for avoiding military service since “flat feet” became popular among cowards during World War II). But Trump isn’t alone in the current White House in seeing “war as the answer,” even asking his advisors, at one point, ‘Why do we have nuclear weapons if we can’t use them?” He has also appointed, as national security advisor, a string of pro-war centurion poseurs like himself. The first of this string of crazies (at least briefly until he was caught by and ultimately pleaded guilty to lying to the FBI) was Gen. Michael Flynn, whose only actual “combat” experience was the “invasion” of Grenada. Flynn was followed by the grossly resume-inflating Gen. H. R. McMaster, who publicly and apparently privately until his forced departure from the National Security Advisor post last week was pushing mad idea of having the US risk a “limited” military attack on North Korea intended to give that country’s leadership a “bloody nose” in the name of demonstrating US seriousness. (At least the draft-dodging Bush Jr. consigliere Dick Cheney, while never actually firing a gun in battle, had the experience of inadvertently shooting his friend and host in the face and chest during a “canned” quail hunt.)

Now that McMaster has been pushed out by Trump, with his appointment of the truly bloody-minded John Bolton, we’re back to 1991. While Trump may have, back during the campaign and during his early months as president, genuinely favored ending the US policy of permanent war that has seen the US military budget grow to where it annually consumes well over half the total federal discretionary budget, and though he may have intended to seek friendlier relations with Russia, with his Bolton appoint as head of the NSC, we’re back in the darkest days of the Cold War. But even worse, the Trump administration is contemplating hot wars with at least two significant powers, Iran and North Korea, the latter armed with a dozens of nuclear weapons and rockets capable of delivering them — even to the US.