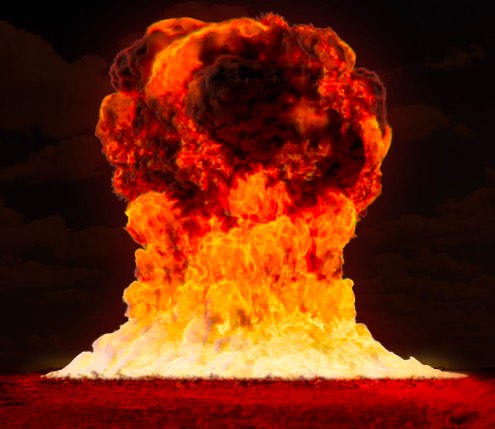 The Bush, Obama and Trump administration have broken two very important promises, or treaties, with Russia and it’s going to be very costly and dangerous for us and for the world thanks to them.

The first broken promise was the decision by President George W. Bush to ignore the documented promise made by President Reagan to Russian President Mikhail Gorbachev that if he took down the Berlin Wall and allowed the Eastern European nations under Russian domination to go their own ways politically, the US would not seek to bring any of them into NATO.

After his own state department helped fund and organize a coup that overthrew the elected government of Ukraine in 2014, President Obama then provocatively held out the possibility of Georgia, another country formerly part of the Soviet Union and sharing a long border with Russia, joining NATO and  also began providing arms to Ukraine.

All of this was perceived as a serious threat by Russia, especially when the Obama administration began providing US military equipment to countries bordering Russia or its ally, Belarus, and conducting joint military operations even in border countries like Estonia and Lithuania, and began sending military supplies to Ukraine when it was engaged in actual fighting with ethnic Russian secessionists in the eastern part of that country.

{Just recall the hysteria a few months back when Russia flew just two aging long-range bombers to an airbase in Venezuela! There were Congressmembers and news pundits warning darkly that the hulking planes might be carrying nukes, as if the two planes might launch a war.)

Compare that to President Trump, who has upped the ante in Ukraine by providing lethal weapons to that country to aid its fight with Russian-armed secessionists in the Donbass region, has also put US forces in those border countries near Russia, set up anti-missile batteries along the Russian border, and most seriously, cancelled the Reagan/Gorbachev Intermediate Force Nuclear Treaty that since 1987 had eliminated America’s  Pershing II ballistic missiles and Tomahawk cruise missiles from Europe.

The Trump administration also has begun plans, long on the drawing board at the Pentagon, to base hundreds of the Air Force’s new F-35A stealth fighter-bombers along Russia’s borders. Each of these planes, equipped to carry a new variable-power nuclear bomb called the B61-12, which can produce an explosion of between 0.3 kilotons and 50 kilotons (the latter two to three times the power of the bombs dropped on Hiroshima and Nagasaki), is specifically designed to sneak across the Russian border undetected to deliver nuclear strikes on missile launch platforms, silos and government and command-center locations as part of an all-out first-strike nuclear assault.

In response to all these very real threats, Russia, which has no parallel ability to respond to US basing of short-range nuclear missiles near its borders able to strike targets in minutes, has responded by developing fully maneuverable hypersonic missiles capable of flying to various targets in the US at over Mach 5, which makes them almost impossible to intercept. China, also fearing a US attack, is working hard to develop a similar type of weapon. (It is important to note that such hypersonic missiles, while fast, could not function as first-strike weapons — only retaliatory ones — as they would give plenty of warning of an attack, allowing the target country to launch it’s retaliatory arsenal.)

While this strategic response on Russia’s and China’s part may keep the US from launching a first strike on them, it has also prompted the Pentagon to call for new funding for a crash program to “catch up” with Russia and China in hypersonic missile capability.

So, what the US breakout of the Reagan no-NATO-move-towards-Russia promise and the Reagan-Gorbachev INF Treaty has accomplished is not increased US security, but rather a new full-scale nuclear arms race. Only this time we have a military that can barely be called at war (the one ongoing war in Afghanistan only involves some 10,000 US troops, less than 5% of what we had fighting in Vietnam at the height of that last real US war) with a whopping 2019 budget of $717 billion, and with President Trump calling for $750 billion for next year.  A fair part of the increase will be not just to fund the US part of the new hyperspeed missile race, but to goose the arms race further by establishing Trump’s insane new “Space Force.”  That, if it happens, will lead to a hugely destabilizing and incomprehensibly expensive space arms race, even as funds for actual space science get slashed.

Clearly what is needed is not more weapons and more spending on weapons, but negotiations to restore the INF treaty that removed nuclear weapons from Europe, and negotiations elsewhere to defuse all the tensions in trouble spots around the globe — especially those in places like Syria, Ukraine and Venezuela, as well as off the coast of China and in Korea, that threaten to pit US military forces directly against Russian and/or Chinese forces.

Make no mistake: There are crazy people in positions of power and influence, from John Bolton, heading the National Security Council to Armageddon-believing fundamentalist Christian Secretary of State Mike Pompeo, the nameless nuclear strategists at the Pentagon and the war-gamers at the Rand Corporation — people who actually think the US should try to develop a strategy for “winning” a nuclear war with its two nuclear rivals.  Some of these whack-jobs are talking about the “inevitability” of war with Russia and/or China by 2030 — in Bolton’s case with a smirk under his Stalin-like mustache.

This of course is all pure madness.

And the driver of this madness? The United States.

It is the US, after all, that is operating a global military, with over 200,000 military personnel based overseas in over 800 locations, with over a dozen aircraft carriers, each carrying the equivalent of an entire middle-sized country’s air force, and nuclear capable, with a fleet of giant Trident II missile-carrying subs patrolling silently around the globe mostly keeping in range of Russia and China, each with 24 huge and hugely accurate 10-warhead missiles capable of wiping out a country or all of its retaliatory potential in minutes, and with an army of over 2 million, a force which it has demonstrated repeatedly that Washington is ready to ship abroad to launch wars when the US doesn’t get its way.

It is the US that accounts for 34% of all global military spending (more than three times China’s spending level and more than 11 times Russia’s), and the US that is also the world’s biggest arms merchant, sowing instability everywhere it peddles its deadly wares.

It is then the US that needs to turn this madness around. And since we’re unlikely to see either of our two political parties, both pro-war and pro-military, do anything like that,  it is going to have to be up to the American people to say “Enough!”

Tax season is upon us. By April 15, we will all be forking over more than a trillion dollars of our hard-earned money in taxes to the federal government. When you are paying your share of that bill, remember that 57 cents out of every dollar you pay for all discretionary spending in the federal budget is going straight to the Pentagon. Everything else aside from separately funded Social Security, Medicare and payments on the national debt — funding for transportation, health care, education, environmental protection, parks, welfare, border security, Justice, NASA, energy, the FDA, the National Institute of Medicine, etc. — is paid out of what is left after the Pentagon gets its outsized majority of the tax take.

And what are we getting for all that money?  Insecurity, a promise of catastrophic war within a decade, and no attention at all paid to the looming and even greater catastrophe headed our way like a runaway freight train of a real as opposed to biblical armageddon: an unlivable overheated planet.

It’s time to take action folks, and shut down the Pentagon, replacing it with a Department of Peace.  Out with the warmongers and madmen!