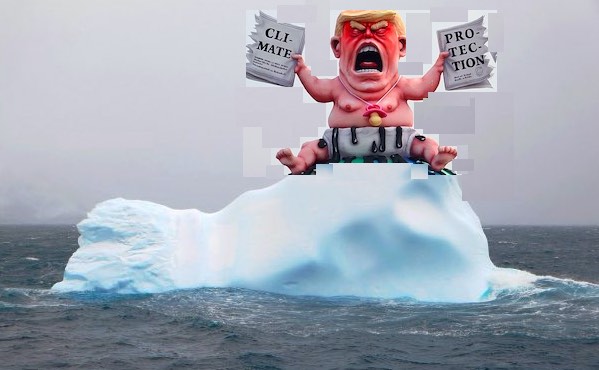 Warnings from climate scientists and climate monitoring organizations are growing progressively more dire, frightening and depressing. There is new evidence that the melt rate of Greenland’s mile-thick ice cover is starting to happen at a “runaway” pace — one that could end up raising sea levels by some 23 feet. New evidence too that Western Antarctica, with enough ice to raise sea levels by 65 feet or more is starting to melt, joining Eastern Antarctica which has already been melting rapidly. There is also increasing fear among scientists that massive deposits of methane clathrates, a kind of ice composed of methane and water ice, lying just beneath the bottom of the shallow Arctic Ocean off the coast of Siberia and North America, are starting to boil up through the warming sea bottom, threatening to burst in a series of gigantic methane “burps” into the atmosphere, which would add immeasurably to greenhouse gasses (methane is anywhere from 26 – 80 times as potent a greenhouse gas as is CO2).

Meanwhile, as this crisis grows, we in the US, the second largest annual contributor of CO2 in the world, are confronted with the criminal negligence and deliberate climate action sabotage of the Trump administration and the Republican majority in Congress (aided by a few key Democrats), who still insist that global heating is a fraud and a conspiracy.

I think it is time that we as a people, we as human beings watching this insane effort to hasten our and much of the whole global biosphere’s extinction, begin contemplating the kind of punishment that would be appropriate to mete out to the criminal class in Washington, DC, beginning at the top with the execrable Donald Trump, whose own flatulence, courtesy of a diet of deep-fried fast food is probably a significant contributor to global atmospheric methane (and would deem him a threat to homeland security if he ever allowed smokers into the enclosed space of the Oval Office with him).

I’m not a supporter of capital punishment, so I can’t call for a guillotine or a hangman’s noose, gas chamber or electric chair. But I think a creative punishment that would likely lead to Trump’s premature demise would be acceptable, as long as it was slow and in some way attributable to the disaster that he himself has helped to bring on us all.

With that in mind, I propose that, once Trump is out of office, and once the evidence of the role his criminal promotion of increased burning of carbon-based fuels has played in accelerating the process of global heating becomes clear to all but the most ignorant and besotted of his backers, he be tried and then transported with all haste up to the North Pole, where he would, following an ancient Inuit tradition applied in times of existential crisis to those deemed a burden on society, be set on a smallish Iceberg, and left to freeze to death, be eaten by a starving polar bear, or drown once the iceberg shrank to a point it would no long hold his bulk above water. He could be provided with a knife and a harpoon, perhaps, and a picnic  cooler full of Big Macs and fries (we don’t have to be heartless about this, after all).

While the Inuit no longer practice senilicide, it was used long ago in times of hardship to make it easier for the rest of the group to survive on limited food supplies. Those too old or frail to contribute to the group’s survival in such times were seen as expendable. In Trump’s case, he is demonstrably already too old and frail to contribute to anything useful (can you image Trump planting corn or harvesting sheaves of rice in a paddy?). Indeed, he has not contributed anything useful in a lifetime of building a tawdry real estate empire, and more recently while residing in the White House and Mar-a-Largo..  Moreover, he stands guilty already of helping to make the US and the world a much less secure provider of food for the 7.5 billion humans living on the planet.

I look at our two kids, currently 34 and 25, and at our six-year-old granddaughter, and my blood boils to think that years are being wasted by Trump and his Republican enablers — years that could have, under responsible, inspired leadership,  been used to aggressively attack the cause of climate change, which is the expanding use of carbon-based fuels and the frantic conspicuous consumption of wasteful foods and goods. Perhaps had his two years as President been used that way,  climate change might have slowed its advance,  giving humankind and the biosphere more of a chance to adapt to the inevitable catastrophe.

I am furious that my kids have such a dystopic future to look forward to, with millions — perhaps billions — starving to death around the globe, with resource wars and migrations that will make today’s fake news “caravans” to the Mexico border look like class trips, with the system of laws in the US breaking down as the desperate have-nots begin to organize to take what they need to survive from the wealthy, as the wealthy turn to the police and military to try and keep them at bay. I weep at the inevitable loss of the world’s astounding biodiversity as millions of species that cannot adapt to the rapid changes in their habitat and to the the loss of food that they have evolved over millions of years to rely upon succumb and vanish forever — something that is already happening rapidly around the world.

From my perspective, watching the criminal Trump, no doubt wining and shouting in fear and anger, as he drifts off towards the horizon on a shrinking block of ice, would provide at least a measure of catharsis.

We could do the same with some of the more irresponsible leaders of Congress — Senate Majority Leader Mitch McConnell (R-KY) and Sen. James Inhofe (R-OK), a rabid climate change denier who for years headed the Senate Committee on the Environment. Both deserve the ice floe treatment for their epic crimes against humanity. Candidates on the House side for similar treatment would be former House Majority Leader Paul Ryan (R-WI) and current House Majority Leader Kevin McCarthy (D-CA).

But let’s be clear: It’s not just Republicans who have been blocking action on climate change. Sen. Joe Manchin (D-WV), another climate change denier who just narrowly won election in his state, is being awarded by the Democratic leadership with a seat on the Senate Energy Committee, where he will continue to support the construction of more coal-fired generating plants. For this kind of treason against our country’s and our children’s’ future, he deserves his own slow-melting iceberg.

The sad truth is it may not be possible to punish all the climate criminals in Congress with one-way rides on icebergs, since by the time we get to a point where the American public is ready to arrest, try and condemn them, there may be little or no ice left to launch them on. According to one analysis done in 2017 by vice.com, there were 53 senators that year who were climate change deniers. That included, several Democrats like Manchin. In the House that year, the article reported that 232 out of 435 House members were climate change deniers, again including some Democrats. That’s a lot of floating ice, and by next summer it may be all gone.

So I hereby invite readers to submit, at TCBHmail@gmail.com or on our facebook page, to suggest your alternative punishments for these politicians whose crimes will, as long as there is still a history of mankind being written, go down as the worst of all time.