President Trump really went a bridge too far with his bizarre Bible photo op and his order for federal troops to attack peaceful White House protesters to allow him to exit his white house bunker and walk unimpeded across the street to a church to have his photo taken holding it up (after having it pointed out that he was holding the sacred book, hasily borrowed from the church behind him, upside down!).

In separate letters to all US troops, both Defense (sic) Secretary Mark Esper and Four-Star Gen. Mark Milley, Chair of the Joint Chiefs of Staff, the nation’s top general, told all people in uniform that their loyalty is to the US Constitution, not to any political leader.  Milley, in his memo, added an additional note jotted in pen to stress his point further writing: We all committed our lives to the idea that is America — We will stay true to that oath and the American People.”

Here are the two letters,  both well worth reading in full. Both make it clear that the obligation of federal troops is to defend the right to free speech and peaceful assembly — a direct rebuke of President Trump’s call for violent attacks on protester and for “dominating the streets” of the nation’s cities. 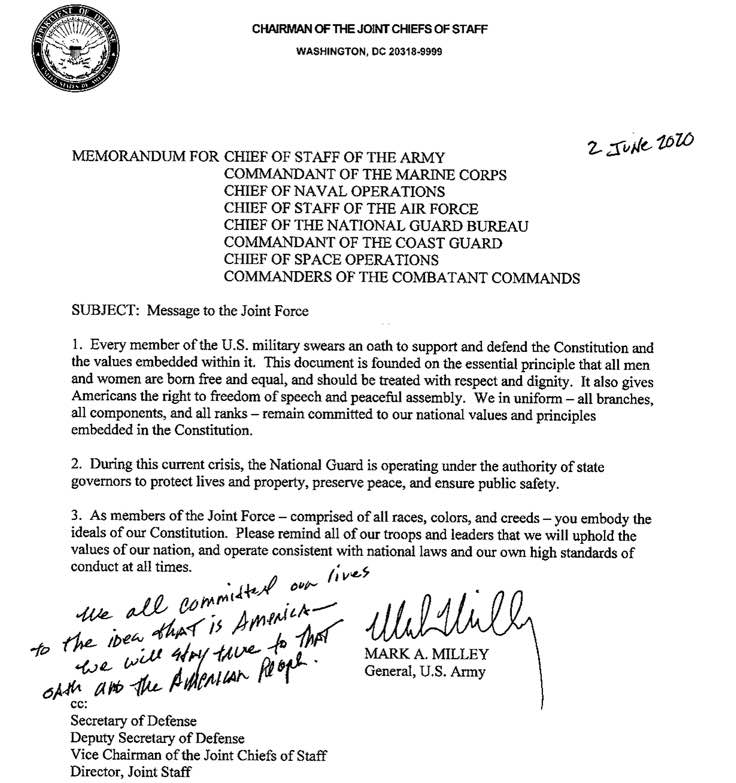 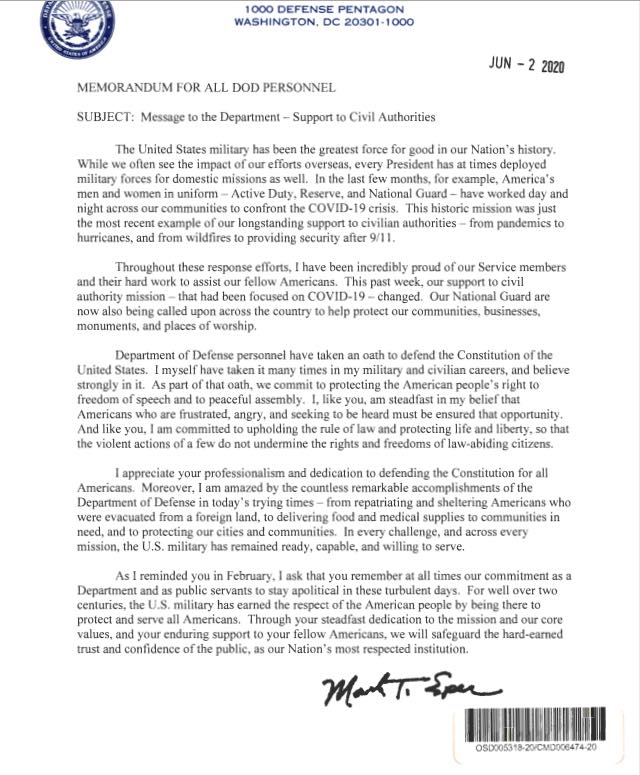 Of course, things could still take another turn going forward in this fast-moving nationwide uprising, but for now it seems like the risk of this wannabe Mussolini in the White House using the 1807 Insurrection Act to declare martial law in the US with himself as Generalissimo has been seriously diminished if not foreclosed by concern that the military might not go along with it.

But it’s important to note that both of these memos didn’t just happen because of the patriotic sentiments of their authors. They happened in the face of massive protest across the country, and nationwide outrage at the use of federal troops to attack protesters outside the White House in an area traditionally used by protesters against presidential actions — an attack that was ordered by President Trump. It was after that outrage was displayed in more intense and militant demonstrations that Milley and Esper wrote their memos.

Here’s what Washington DC’s Mayor Muriel Bowser had to say about the the president’s efforts to take over that city and supplant civil government. Speaking to a massive rally outside the White House, which President Trump has had fenced off with plexiglass walls and concrete barriers like a a fortress under seige, she said:

“If you are like me, on Monday you saw something that you hoped you would never see in the United States of America: Federal police moving on American people, peacefully protesting in front of the People’s House…

“If he can take over Washington, D.C., he can come for any state and none of us will be safe. So today we pushed the Army away from our city. Our soldiers should not be treated that way, should not be asked to move on American citizens.”

It should be added that Gen. Milley, after a visit to National Guard troops patrolling the streets of DC early last week,  ordered them all to turn in their weapons and to do their patrolling unarmed — a clear reflection of the meaning of his June 2 memo that US troops’ duty is protecting the people, not repressing them.  Also significant is that the Pentagon sent 10,000 federal active-duty troops from the Northern Command based in the US who had been called to the DC area by Trump to return to their home bases, a direct countermanding of the Commander in Chief’s intention.

Meanwhile calls are growing across the country for “defunding the police,” and for shifting those funds used for militarizing the cops to funding human needs like health care and education. In Los Angeles, the City Council has already acted to cut $160 million from the Los Angeles Police Force’s budget. This is also a huge reversal from a time just a few months back when police were still routinely being referred to as “heroes” along with anyone else wearing a uniform.