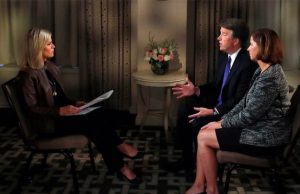 Whatever your view of Brett Kavanaugh, let’s get one thing clear:  While he’s hoping to become the ninth justice of the US Supreme Court, he is not on trial. He is facing a confirmation hearing by the Judicial Committee of the US Senate.

Republican backers of this clearly flawed and truth-challenged candidate are insisting indignantly, in the case of mounting charges from alleged victims, that he’s entitled to a “presumption of innocence” as several women claim he assaulted and harassed them as a teenager and perhaps when he was older, and amid evidence that he had a “runway model” standard for hiring female clerkship applicants as a judge on the Third Circuit Court of Appeals in Washington, DC which led Yale Law professors to recommend that female student applicants to clerkships for Kavanaugh “dress accordingly.”  (As one prominent professor is reported to have told such students, “There’s a reason all his female clerks look like models.”)

But that’s not how it works in a Senate confirmation hearing, any more than it’s how it works when you or I go to a job interview. Does an employer give an applicant a “presumption of innocence” when they contact prior employers to check on your work record?

Of course not. If I were applying for a job at a newspaper, the hiring editor would likely call prior papers I had worked at. If the editor they called happened to be the one I told was simply caving in to pressure from big advertisers in killing a story I had done on corporate corruption in the appealing of tax assessments on major office building properties using two different sets of books for determining property value, and that person said I was “difficult to work with,” I would have no recourse.

I would be deemed guilty as charged, and moreover, I quite likely wouldn’t even have that Constitutionally guaranteed right to “confront my accuser,” because the hiring editor would have no obligation to even inform me of the “evidence” that was being used against me. That’s the way job applications work in the United States of America.

In that sense, unless a Senate Committee decides to hold a closed hearing, a confirmation hearing like this one for Judge Kavanaugh is considerably fairer than the situation most job applicants face. At least Kavanaugh, and other judicial candidates facing such hearings, gets to know what the charges are that are being made against him. That is, at least if the majority party in control of the hearing doesn’t try to deep-six an accusation and pretend it doesn’t exist, as the GOP members controlling the Judiciary Committee tried to do with the second woman, Deborah Ramirez. She’s a fellow Yale alum who is accusing Kavanaugh of gross harassment with a penis in the face while they were both freshmen. Justice Committee Republicans hid her complaint for a week hoping to get past a planned but later postponed vote  to approve the not-so-good judge’s nomination.

The committee standard in these hearings is not that accusations against Kavanaugh get proven “beyond a reasonable doubt” (the standard for proof for jurors or judges in criminal trials) or even “by the preponderance of the evidence” (the standard of proof for civil trials). The standard is and should be: Do we really want someone to get this job who has reputable people saying terrible things about his or her fitness to serve in this lifetime position?

That’s how it works when a prospective employer looks at a job applicant. And Kavanaugh is an applicant for one of this country’s most prestigious and important jobs:  Supreme Court justice.

So far, Kavanaugh’s looking pretty shabby as a candidate for that post. He’s having to use his wife as his best witness, which, if we want to go to the inappropriate trial analogy being used by Kavanaugh’s Republican defenders is the typical last refuge of male scoundrels: Get the little lady to come and stand, or in Kavanaugh’s case sit primly by you, however embarrassed and ashamed she may be at having to be there looking supportive, giving a show of appearing like she, at least, believes you’re not a debauched cad and a liar.

I just served on a jury panel in an assault case last week where we on the jury concluded unanimously after three hours of deliberation that the defendant was guilty of assault in a road rage case where he punched and badly broke the jaw of his victim. The fact that his wife was put on the stand and answered his attorney’s question as to whether the defendant, her husband, was a “peaceful and non-violent man” by responding “Yes” did not sway a single one of us in our view of guilt based on the evidence presented.

I doubt that Kavanaugh’s dragging in his wife to accompany him in a puff interview session on Fox TV — in which he, in one cringe-worthy moment, told viewers that “I did not have sexual intercourse or anything close to sexual intercourse in high school or college of for many years thereafter”– swayed anyone who was undecided about his moral, psychological and behavioral fitness to be one of the final deciders on justice in the land.

Since this hearing is, at bottom, a job interview, I would say we’ve heard enough already, and, by the time at the end of this week or next after the committee and the citizens of the nation have heard the testimony of Christine Blasey Ford, Ramirez and perhaps a third alleged Kavanaugh sex abuse or harassment victim now being mentioned in the media as ready to come forward, they, and all of America — or at least that portion of us who want a fair, impartial and most of all honest jurist to be the ninth member of the Supreme Court — should know that Kavanaugh is not that man.

We don’t need proof of guilt. All we need to know is that there is significant evidence of an apparent  pattern of misconduct towards women that make it clear this guy should not be in a position to be deciding important cases that involve the rights of women, the credibility of women, or the alleged improper behavior of men. Remember, the women making the charges didn’t know each other, but the accusations are very similar in portraying a guy who is rough, callous, uncaring and basically a sexist and sometimes a violent sexist pig.

For example, consider this. Many young men in America, sadly mostly black young men, are languishing in jail today because they were found by a court to have sexually assaulted women as Kavanaugh has been accused of having sexually assaulted Blasey Ford. Those are young men who on the discretion of a trial judge, were tried as adults though they, like Kavanaugh, were only 17 when the alleged offenses were said to have occurred and their alleged victims were perhaps 15 or 16, like Blasey Ford when she was assaulted. What would Kavanaugh do if such a case were brought before him on the Supreme Court, particularly with the intent of claiming such a decision to try them as adults should be declared unconstitutional? Would he say, as he did on Fox when asked by Fox reporter Marsha MacCallum about how he would judge young men accused of abusing a girl — after a long pause and an attempt to just look down at the floor —  “I think everyone is judged on their whole life.”

Seriously, judge? How do you judge the “whole life” of a 17-year-old? WTF kind of answer is that?

No, this is not a man fit to be a Supreme Court Justice.

In fact, he’s not fit to be an Appellate Court judge either.